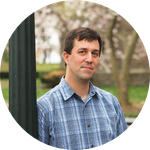 About
Prof. Holler received a B.S. in Physics from Polytechnic University in Brooklyn, NY. He went to graduate school at Yale University, earning a Ph.D. in Applied Physics. After graduate school he worked for a couple of years at Los Gatos Research in Mountain View, CA on laser-based technology. Prof. Holler left LGR to join the Lasers, Optics and Remote Sensing Department at Sandia National Laboratories in Albuquerque, NM. The entrepreneurial bug was too strong and he spent only a short time at Sandia before returning to California in 2003 as Director of R&D for NovaWave Technologies (NWT), a start-up dedicated to developing laser-based sensor systems. NWT was acquired in 2010 by ThermoFisher Scientific. Prof. Holler left industry in 2011 to join the faculty of Fordham University in the Department of Physics and Engineering Physics.
Joined

Can we change public perception of climate change by providing real-time environmental data?

What's up with the wild extremes of weather?

I gave a talk today on the whispering gallery mode biosensor at the SPIE Defense Security + Sensing Conference. I would say it was extremely well received. Despite running the full 20 minutes for t...