Azolla is a symbiotic superorganism that captures all the nitrogen fertilizer it needs to grow from the air around it. Asia’s farmers have long known this, growing Azolla together with rice to provide a natural fertilizer to bolster rice productivity.

Genome sequencing of Azolla is a big step toward potentially helping crops to use less synthetic nitrogen that would benefit farmers' bottom lines, the environment, and the prices we pay for food.

Fifty million years ago, the Earth was so warm that much of the North Pole was covered with the floating fern Azolla. Arctic Ocean sediments from this time are composed almost entirely of Azolla fossils for an 800,000-year span: an interval called the Arctic Azolla event. As these Azolla plants died and became part of the sediment, they took atmospheric carbon down with them. Global atmospheric levels of CO2 fell significantly, precipitating Earth's initial shift from a greenhouse world towards the current icehouse climate that we're now worried will melt. Azolla is still with us, floating on the surface of ponds and lakes. Tiny, but fierce, it can double its entire body mass in just less than two days––a promising alternative for biofuel production and carbon-capture efforts.

Azolla does another interesting trick–it captures all the nitrogen fertilizer it needs from the atmosphere around it. Asia’s farmers have long known about this, growing Azolla together with rice. Azolla fixes nitrogen, improves the soil, and provides a natural fertilizer to bolster rice productivity. Azolla isn't just a plant; it’s a ‘superorganism,’ a symbiotic collaboration of a plant and a microbe. In a special leaf cavity, Azolla hosts a microbe called Nostoc that converts atmospheric nitrogen into food for its host. Azolla and Nostoc can combat global warming and produce precious nitrogen to help feed the world. Wouldn't it be great to understand this symbiotic relationship better? To be able to decipher the biological "conversation" between the host and the microbe?

Our goal is to unlock this superorganism’ superpowers and better adapt the Azolla system to agricultural, biofuel, and carbon sequestration applications.
We will develop a genomic resource for Azolla. Among the five major plant lineages, the only one without a sequenced genome is ferns. This first fern genome will not only provide an accurate framework to examine patterns underlying evolutionary transitions in land plants, but also a critical resource for nitrogen fixation, biofuel production and symbiosis research.
We will also use metagenomics to comprehensively explore the microbial diversity and functional repertoire associated with Azolla. We will focus on gene families and biological pathways involved in nitrogen utilization and a symbiotic lifestyle.

Azolla is a 'superorganism', consisting of not just the fern but a diverse array of symbiotic bacteria. It is this unique microbiota that converts nitrogen into organic forms and makes Azolla a perfect bio-fertilizer. This fund will be used to sequence the genomes of Azolla and its symbiotic bacteria, so that we can understand the two-way, inter-kingdom language that codes for the molecular machinery underlying this symbiotic partnership, and possibly tailor it to suit our needs.

We will generate a draft Azolla genome using the high-throughput Illumina sequencing technology. Two paired-end, 150bp HiSeq runs will generate 160 giga-bases, giving over a 100X genome coverage. In addition, we will use PacBio technology to generate long DNA reads (>4kb) in order to better assemble the sequencing data into continuous genomic regions. The bacterial DNA will be extracted and sequenced together with Azolla's. Because of the high sequencing volume and smaller genomes, bacterial genomes can be easily assembled alongside with Azolla.

As a start, the funding of $15,000 will get us reasonably good quality genomes for the Azolla superorganism that can jumpstart various exciting research programs. Of course, additional support would give us all that much more leverage and take us further down the road! 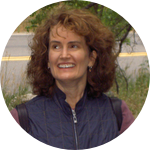 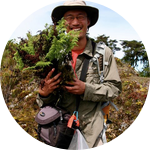 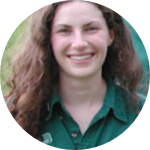 Kathleen Pryer is a Duke professor of biology. She and her colleagues recently named a genus of ferns in honor of Lady Gaga. Kathleen has been studying ferns for 30+ years. She also loves cats. pryer@duke.edu

Fay-Wei Li is a PhD candidate at Duke whose recent fern research was covered by New York Times and The Economist. Fay-Wei is a fern enthusiast and wants to save the world with ferns.

Paul Wolf is a professor of biology at Utah State University. He has worked on ferns since 1983 and is interested in fern genomes and ferns with applications to humans. Paul enjoys running, especially on trails through the forest, or along the roads.

Carl Rothfels is a recent PhD graduate from Duke and is now doing a postdoc at UBC in Vancouver, Canada. He climbs rocks and collects ferns.

Erin Sigel is a PhD candidate at Duke who spends alot of time thinking about the evolution of plant genomes, particularly how they change due to interactions with other organisms. Erin also enjoys kayaking and baking.

We have not just one, but TWO genomes!

"Can the fern that cooled the planet do it again?"
Scientific American wrote two articles recently about Azolla and us. See here and here. 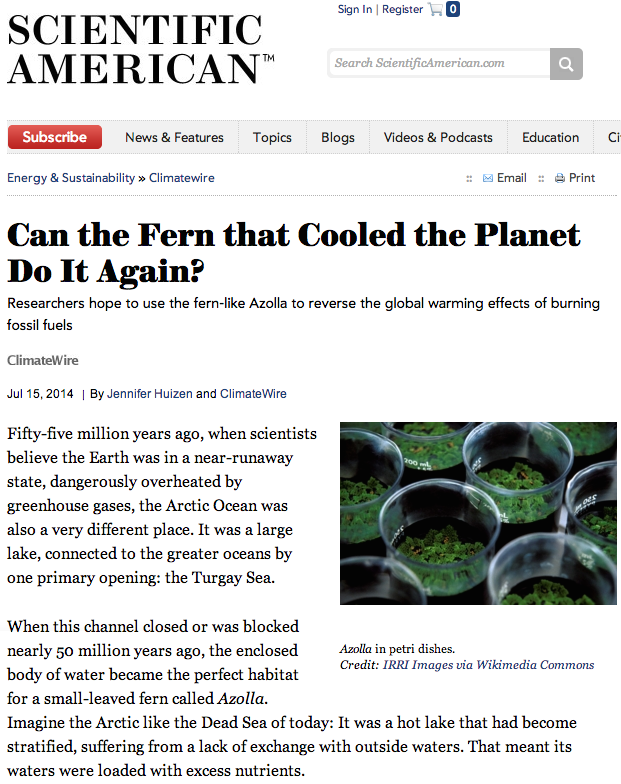 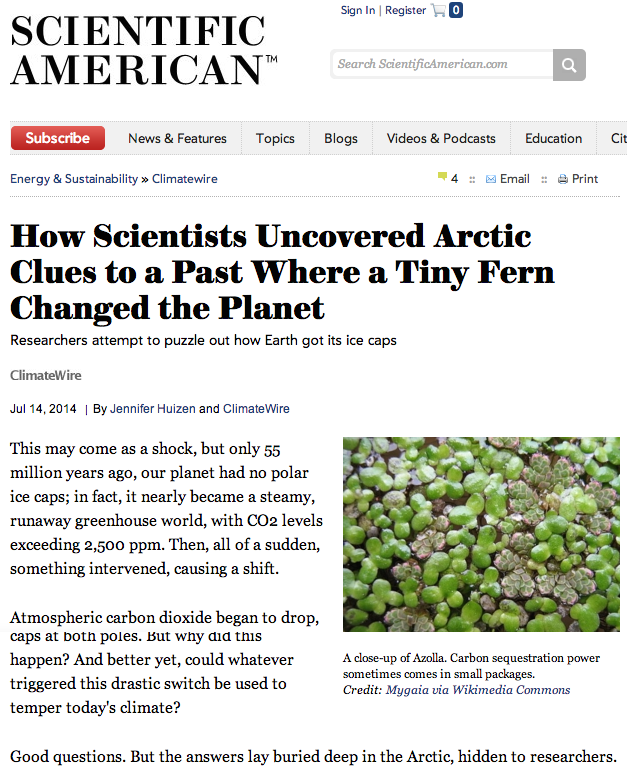 "Finding the genome of an extraordinary plan"
The Economist writes about our crowdfunding project! Check out the awesome story here. 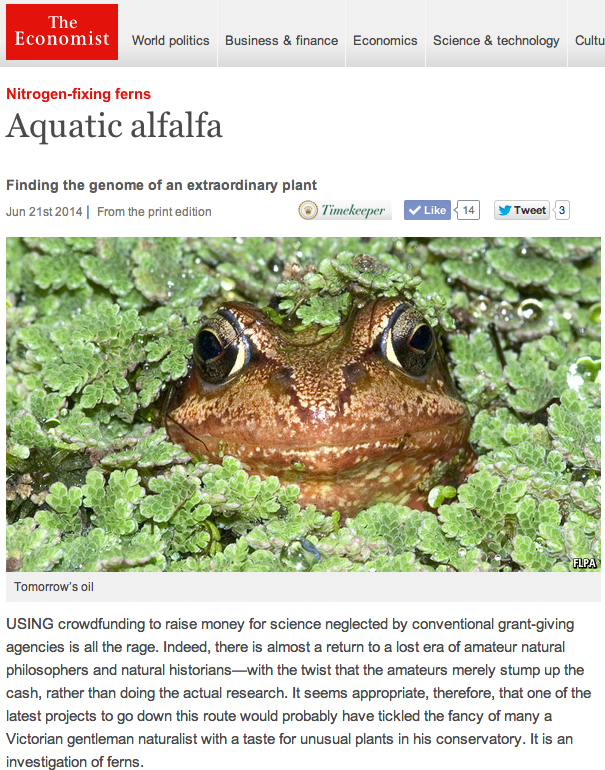 "Let's crowd fund a fern genome that will blow your mind"
In this guest blog post at GigaScience, we summarize the exciting aspects of Azolla, and argue for the need of its genome sequence. 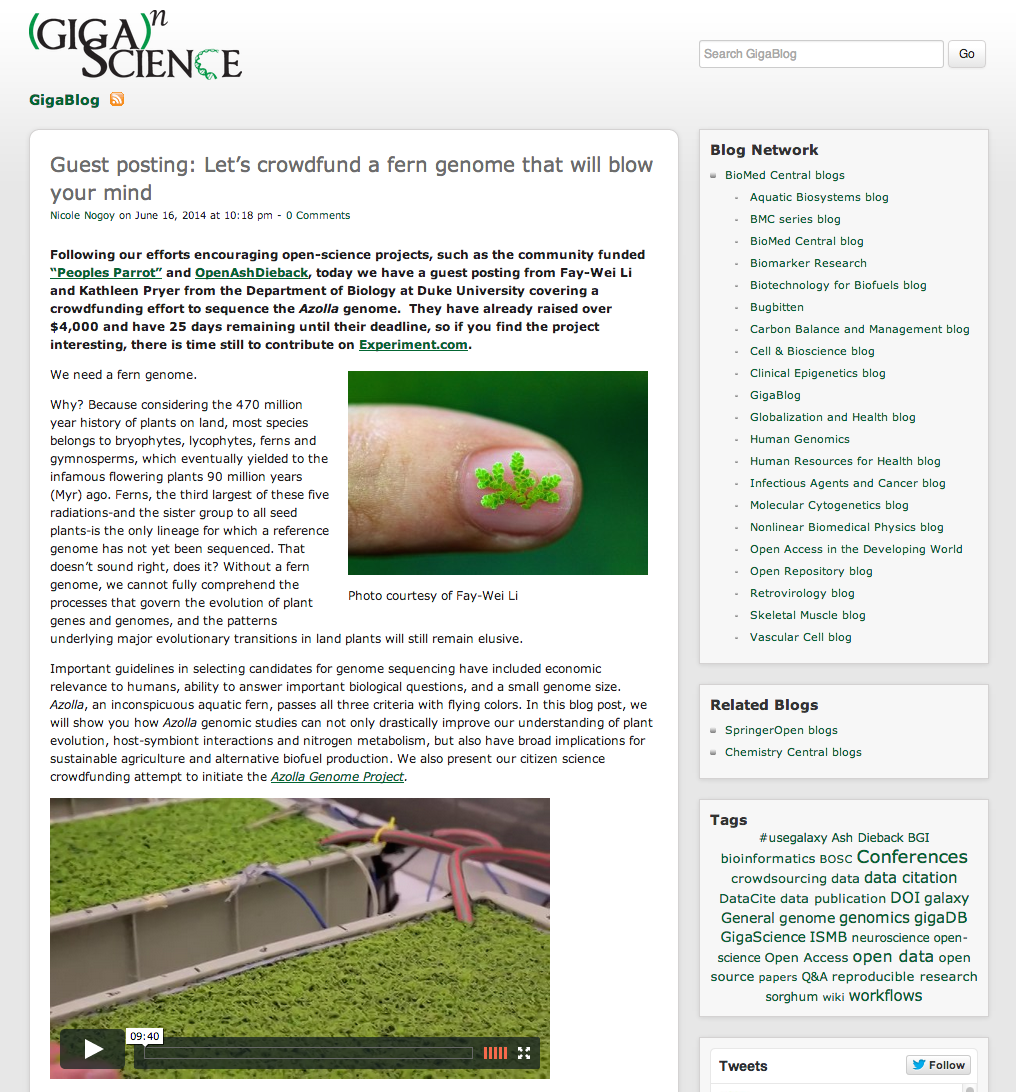 "An ancient solution to a modern problem"
Kathleen Pryer stresses that we should pay more research attention to Azolla, a little fern that has enormous green potential from nitrogen fixation, wastewater treatment to biofuel production. Cleveland (June 6, 2014): 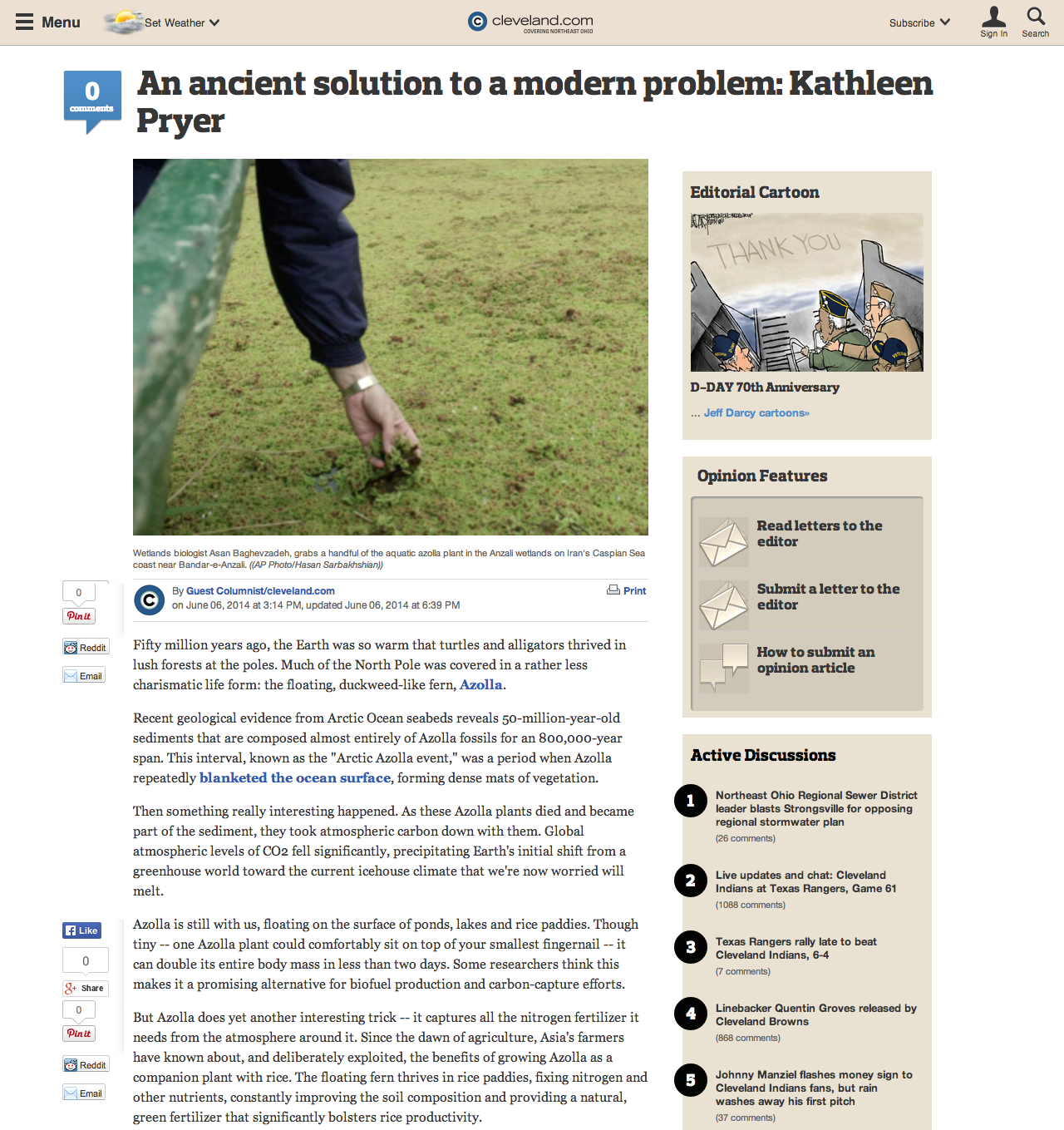 "This lowly fern has massive green potential"
Kathleen Pryer writes about why the Azolla genome is urgently needed. The Globe and Mail (May 30, 2014): 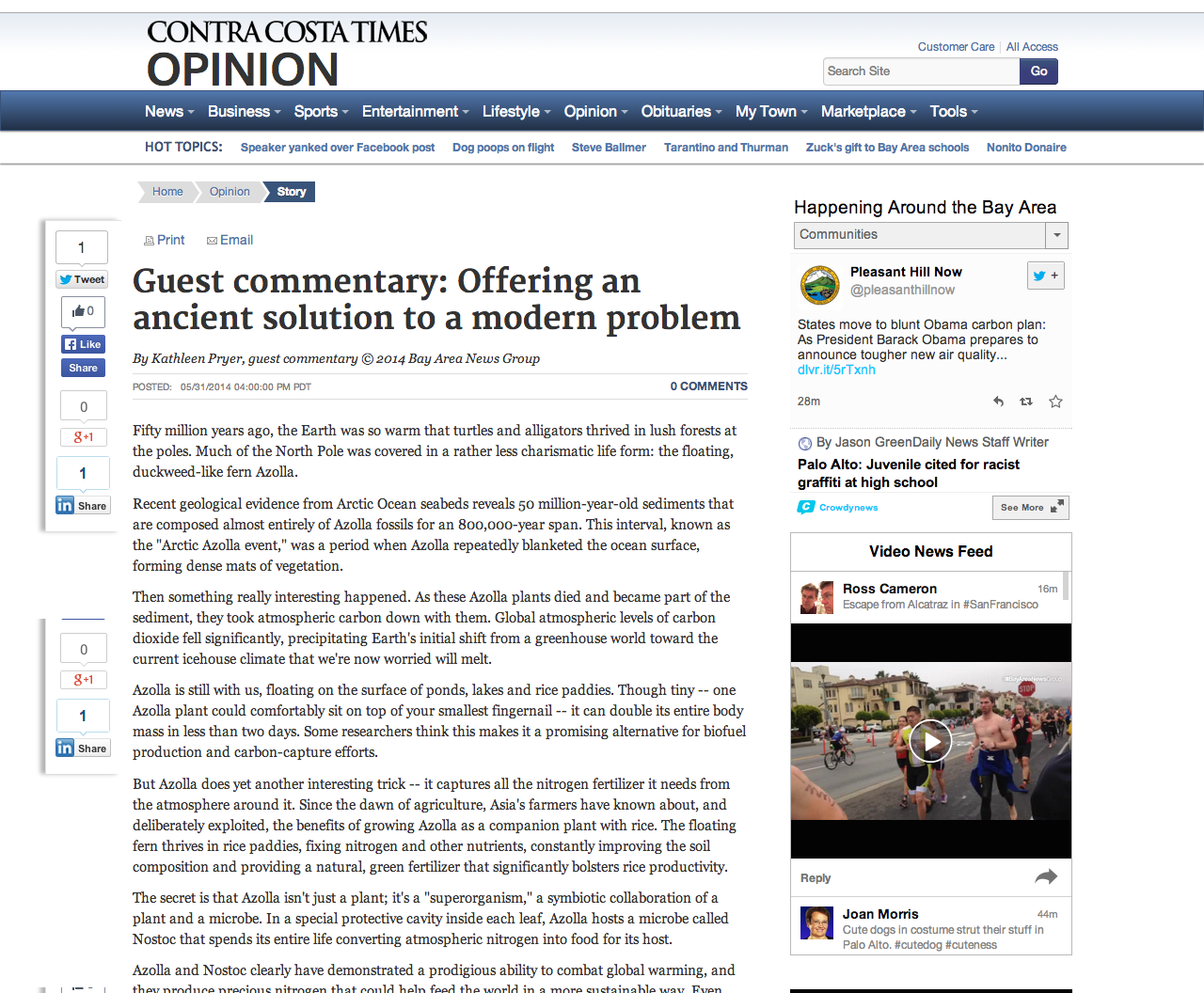 "The Arctic Azolla event"
Jonathan and Alexandra Bujak reveal how Azolla changed our planet’s climate - and may do so again. GeoScientist 24 (5) 2014: 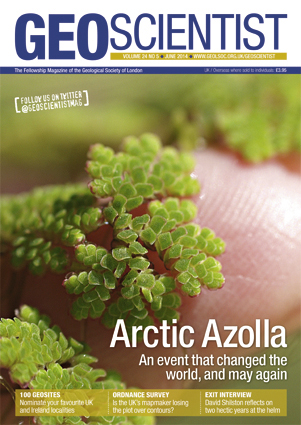 Check out some recent scientific papers about Azolla's green potential!

Dual application of duckweed and Azolla plants for wastewater treatment and renewable fuels and petrochemicals production. Biotechnology for Biofuels 2014, 7:30
--Clean up water and produce biofuels at the same time? Yes, Azolla can do it.

We really appreciate pledges of any amount!

Backers can follow our research news in Lab Notes and on www.azollagenome.net.

For major contributors, we have special treats for you:


Azolla in a rice paddy in Philippines: 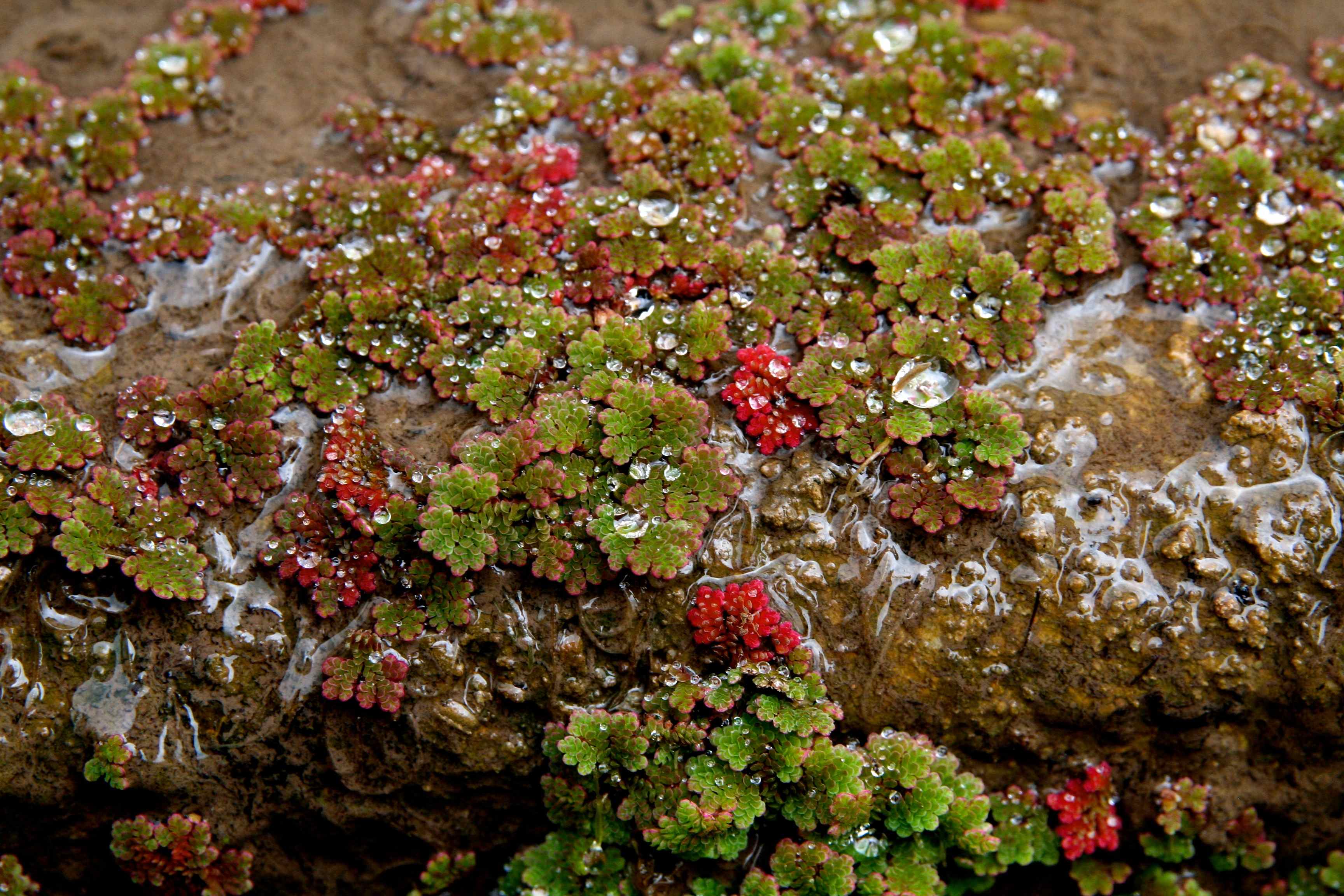 Azolla can comfortably sit on your fingernail: 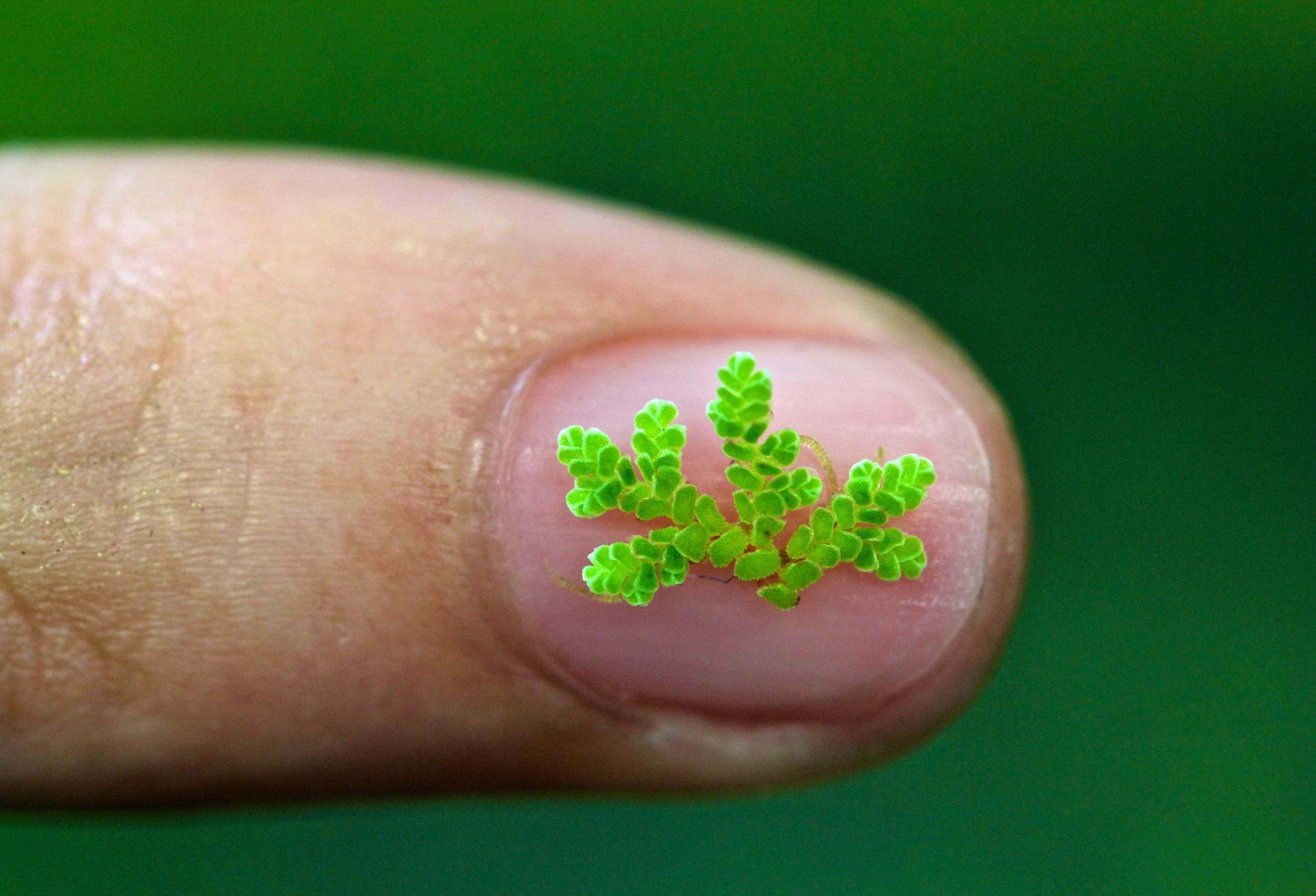 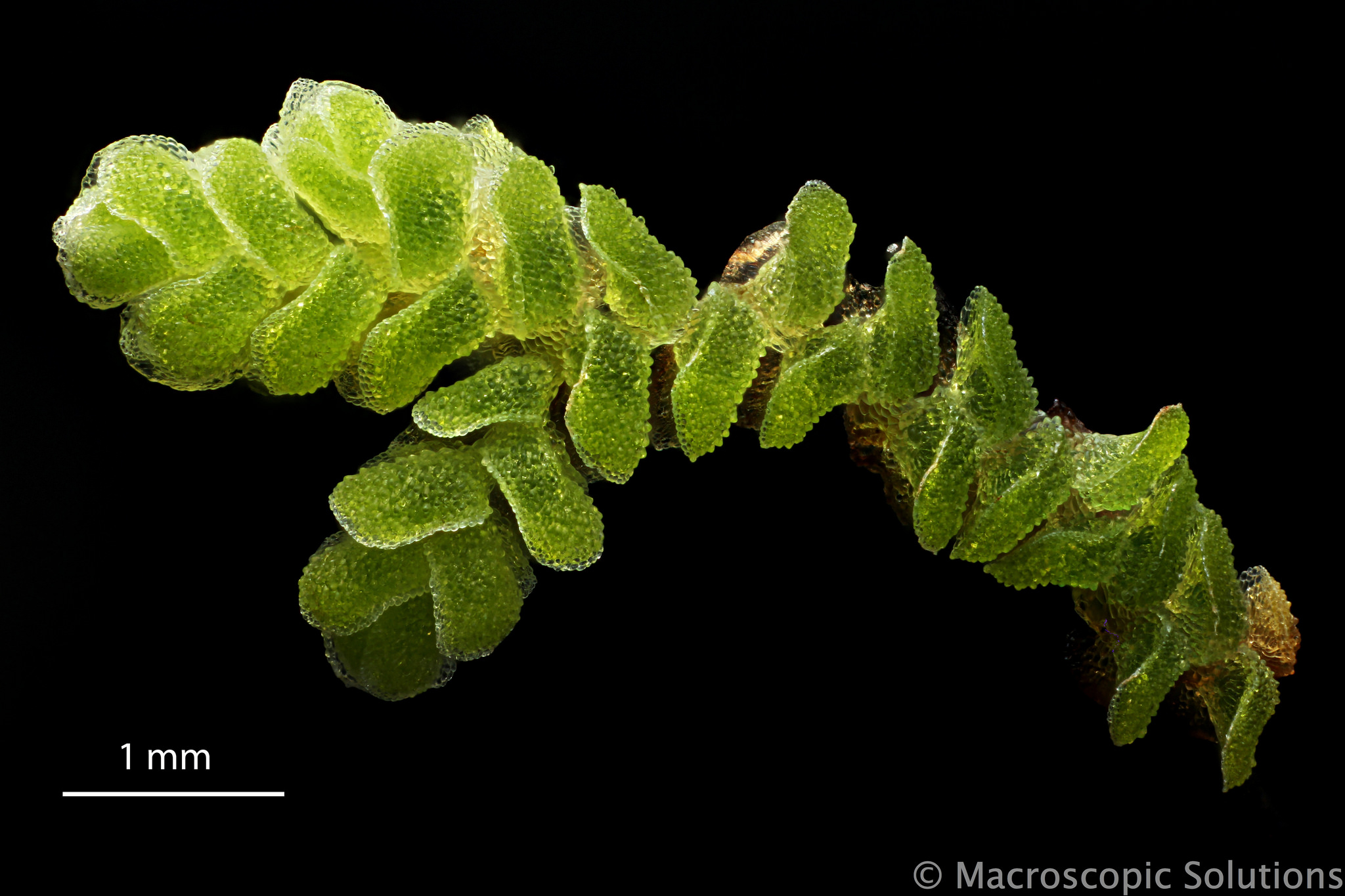