We are now closer than ever to solving the mystery of human language evolution - and birdsong might be the key. As it turns out, songbirds have specialized birdsong brain circuits that show similar patterns of gene activation as the brain circuits that mediate human speech. In our research, we propose to study gene activation in the brains of a songbird species that may offer insights into how our species evolved this complex vocal behavior.

The brain circuits for vocal behavior of humans and birds are marked by the similar activation of dozens of genes. This means that we can develop songbird model systems for studying human language evolution, and we believe that we have found the ideal species for the job.

Our model system is composed of two strains of a same species: the domesticated Bengalese finch (BF) and its wild ancestor, the white-backed munia. Even though it was never bred for its singing ability, BF evolved a much more flexible vocal behavior than its wild ancestor.

In a similar vein, it is believed that flexible vocal behavior distinguishes the present human condition from its ancestral sate, and this is why we believe that this songbird species is an optimal model for studying this puzzling moment of our evolution.

We believe those times are over, and in our research, we investigate a songbird system that might teach us about the evolution of flexible vocal behavior. We hope this study will lead to a better understanding of language as the product of an evolutionary process, and help explain this important mark in the natural history of our species.

Our goal is to compare gene activation in the areas related to birdsong in the brains of Bengalese finches and white-backed munias, and then compare the DNA sequences of these two songbird strains in order to discover if the differentially activated genes have evolved free of constrains due to the more relaxed environment brought by the Bengalese finch domestication. To do so, we will use a new approach called "Exon-capture," coupled with DNA next-generation sequencing technologies.

With your help, we will generate a massive database of genetic information that can teach us about how the Bengalese finch song evolved. If our hypothesis is right, this would indicate that relaxation of selective pressures over vocal behavior could have led us to evolve language.

Brains of birds of the two strains will be sliced, and eight birdsong brain areas will be isolated using a laser microdissection microscope. RNA will be extracted from each microdissected birdsong brain area, and converted into DNA, which will be then sequenced. The fragments of DNA will be identified based on their similarity with the genes of a closely related songbird called Zebra finch, allowing us to identify specific genes in our songbird strains.

The amount of RNA in each birdsong brain will be quantified for each one of the genes we identify, and this is a measure of gene activation of each gene. We will then identify the genes that are differentially activated between the two songbird strains.

The sequences of these genes will be used to draw probes that will capture them in blood samples collected from large group of birds of the two strains. Finally, we will analyze the sequence of those captured genes to identify the ones under relaxation of selection in the Bengalese finch. 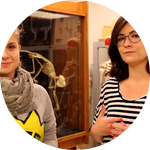 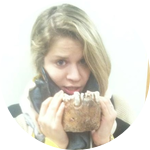 "I've always been curious about how our minds are different from other animal's minds. I feel excited that I've been finally given the opportunity to look into this question, and that I may now give some contribution to this field" - Madza Y Farias-Virgens, BrainEvoLab of the Department of Anthropology at UC Berkeley.

Madza began her work in genetics and molecular biology during her senior undergraduate research in Brazil. First dedicated to the study of the genetics of hereditary neurodegenerative diseases during her Master, Madza has now switched gears and moved from Brazil to US to study the evolution of human language and cognition, and work in the development of suitable and feasible non-human animal models to approach questions in this field.

I've always been curious about how our minds are different from other animal's minds. I feel excited that I've been finally given the opportunity to look into this question, and that I may now give some contribution to this field.

I am a senior at University of California at Berkeley, studying
biological anthropology and clinical psychology. I've always been
fascinated by biology, particularly genetics and neuroscience.