Most lions in zoos are descended from East and Southern African lions, Panthera leo melanochaita, of which there are about 30,000 in the wild. Lions from India and West and Central Africa are a separate, highly endangered group of just 1500 individuals, Panthera leo leo. We hypothesize that lions descended the Moroccan royal menagerie are part of the highly endangered group. To verify whether Moroccan lions can contribute to conservation we need to profile the genetics of lions in several zoos.

Lions have declined by about 90% in recent decades. Most of the 30,000 left are in Eastern and Southern Africa (Panthera leo melanochiata) .

The 'northern' sub-species (Panthera leo leo ) can be counted as follows:

Perhaps only 1000 lions survive across West and Central Africa with most in tiny populations of as few as five or ten individuals, perilously close to extinction.

There are few if any lions from West and Central Africa in zoos today and only 100 captive animals verified in the Indian lion studbook. If the 80 animals in the Moroccan Royal group (in Rabat zoo and in European zoos) are proven to be closely related, they will add significantly to the gene pool.

The Moroccan animals in zoos may be the last chance to save the subspecies from disappearance in Africa.

Morocco itself could become a wild safe harbour for reintroduction of animals, despite no lions being in the wild since the 1950s. This would also give a long term base from which to support lion recovery in West Africa, for example.

We will extract DNA from samples and sequence code to compare Moroccan lions with West African, Central African and Indian lions.

This will determine if Moroccan lions are within the Panthera leo leo sub-species. Genetic profiles enable comparisons with known sequences for West African, Central African and Asiatic lions.

We will then identify which individuals in the Moroccan lion studbook are best suited for breeding to support reintroduction in North, West or Central Africa, using the existing studbook for participating European zoos.

This will stimulate zoo interest in increasing space, breeding and reintroduction. Zoos do not have animals suitable for reintroduction against IUCN (World Conservation Union) guidelines. This project would provide proof of concept for the Moroccan group.

This is a stand-alone project made possible by collection of samples from partner zoos. Zoos have invested significantly in keeping Moroccan lions but have not been in a position to fund genetic research. Despite the continued decline of lions (90% fall in 30 years), there is little enthusiasm from research funding councils in single-species genetics.

This small, highly-focused project offers a practical outcome (captive breeding) and the priming of a significant reintroduction initiative involving a dozen zoos which will have a lasting impact on lion conservation.

The key cost is for a qualified geneticist to prepare and process samples, identify suitable DNA extractions for sequencing, and later analyse data received back from external sequencing providers. Results will feed directly into the Moroccan Royal lion studbook which is a managed database of specific captive lions in European zoos (see Black, Yamaguchi, Harland and Groombridge, 2010) in partnership with Rabat Zoo, Morocco. 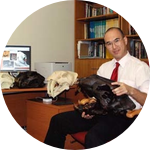 Nobuyuki Yamaguchi
Associate Professor
Department of Biological and Environmental Sciences, Qatar University
As the population of West and Central lions drops below 1,000 individuals this research becomes most relevant. More detailed knowledge of the relatedness of this wild population to the captive lions of North African origin will help inform future conservation efforts. All options must be explored before these iconic cats become extinct over an even greater part of their historic range. 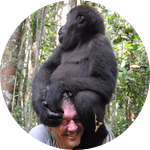 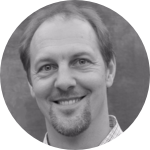 I am an evolutionary biologist and wildlife conservationist. I completed a BSc in Wildlife Conservation and MSc by research at DICE. I completed my PhD in January 2015, on the evolutionary conservation genetics of invasive and endemic parrots under a graduate teaching scholarship. I am now a postdoctoral research associate supervising an MSc research student, Hadi Al Hikmani, working on the population genetics of the endangered Arabian Leopard in Oman.

Simon's research at the Durrell Institute of Conservation and Ecology includes the genetics, history and ecology of lions in North Africa. He also has other interests involving big cats, reptiles & birds, with current collaborations with researchers across the globe. Simon developed the zoo studbook for lions originating from the King of Morocco's collection. The studbook is used by the European Association of Zoos & Aquaria (EAZA) and currently supports the monitoring and transfer of lions for conservation breeding. Simon also works on leopard & tiger conservation and human-wildlife conflict in the Middle East, East Africa and South Asia. 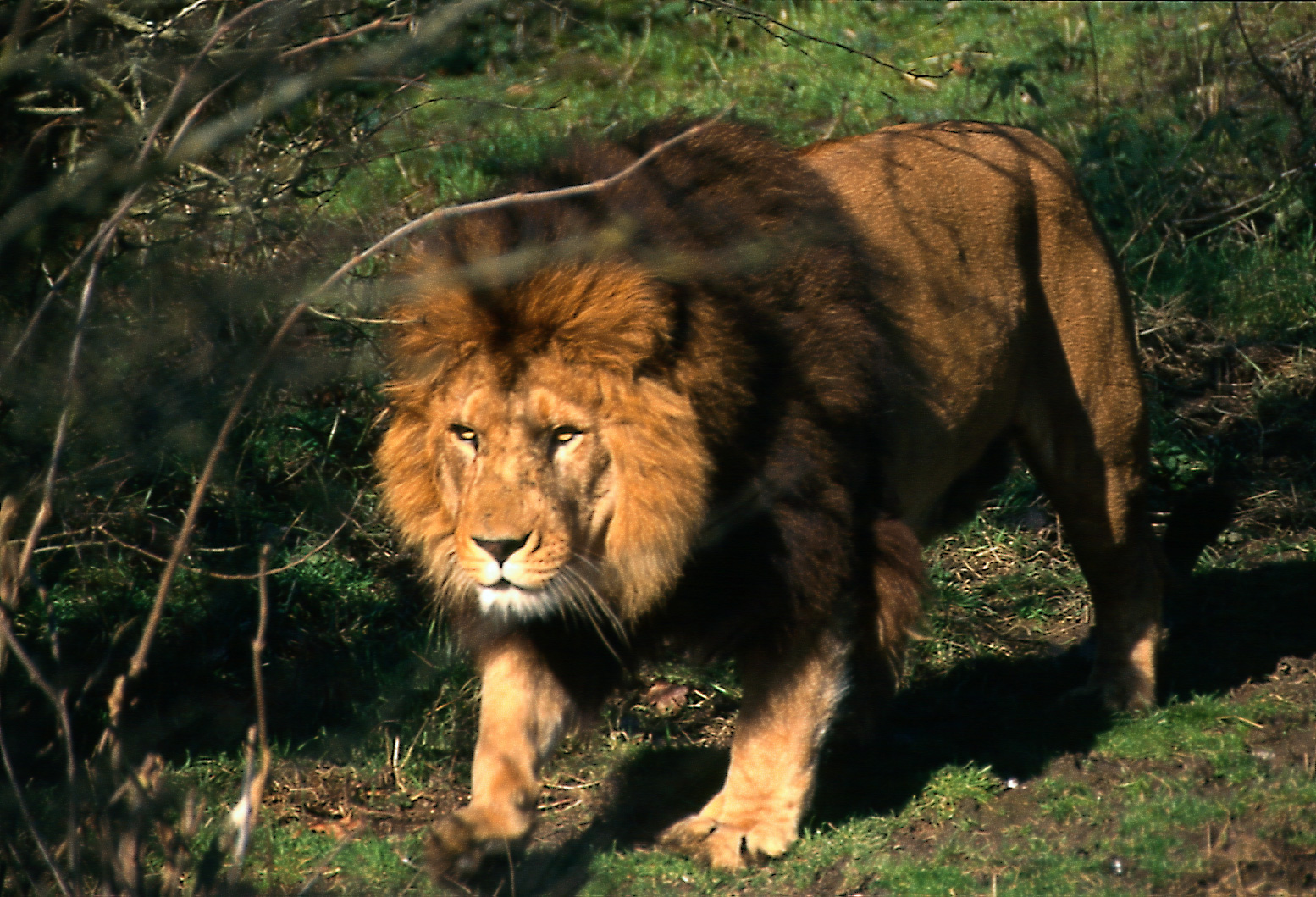 Two male Moroccan lions at Port Lympne Zoo, Kent, (above and below) showing its distinctive deep powerful body, yellow eyes, heavy mane and skull with a straight line from the top of the head to the tip of the nose - all features different to those found on the savannah lions of Eastern and Southern Africa. 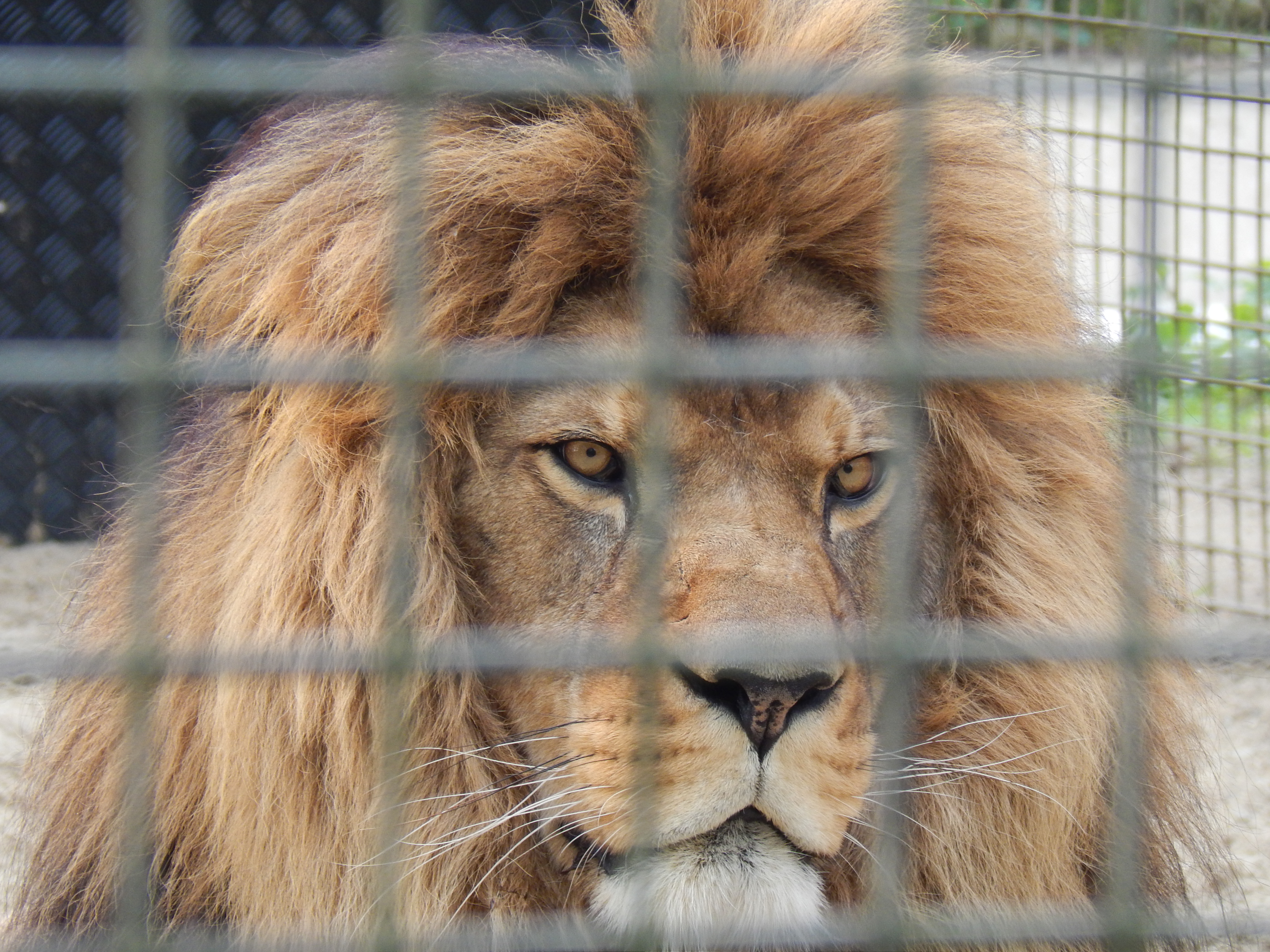 Utilising this fantastic resource of animals kept historically by the Sultans and Kings of Morocco has been a dream for conservation scientists since the 1970s.

In the decades since, lion numbers have plummeted by 90%, The scientific questions about the Moroccan animals are less about an intellectual interest and nowadays more about the vital practicalities of finding lions in the captive gene pool that could support the rescue of the critically endangered West African and Central African populations. 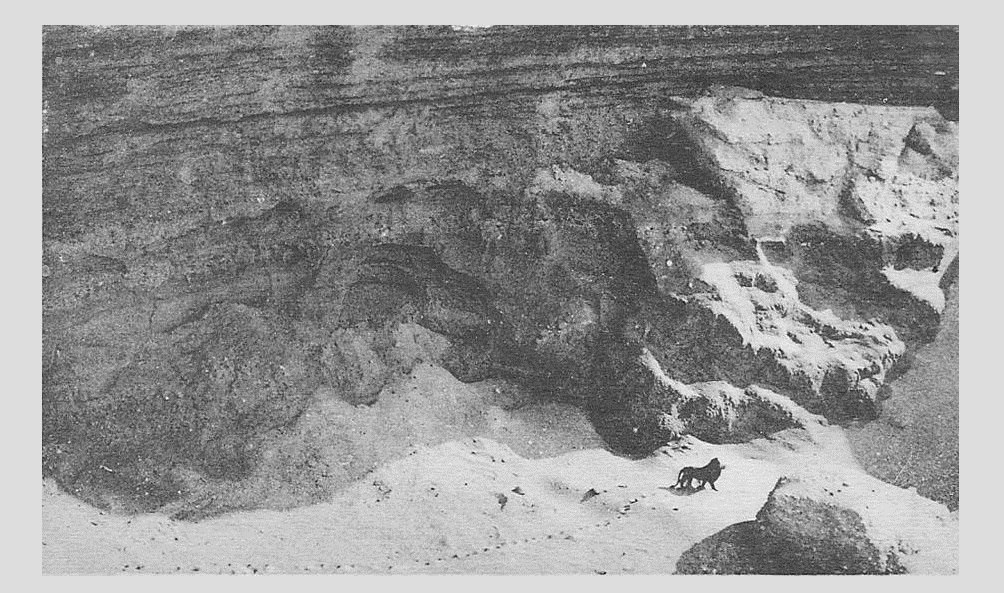 Lion photographed from the air on the Casblanca-Dakar air route, 1925, (M Flandrin)