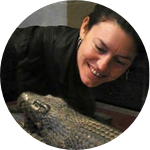 I study DNA from specimens from museums to understand how life has responded to planetary changes over time. I have sequenced DNA from crocodile mummies and from extinct crocodiles, as well as from hundreds of other specimens including century old frogs, lizards, chipmunks and leopards.This area of research (ancient or archival DNA) is rapidly expanding with new techniques and these are exciting times for scientists like me.

Although I conduct research on ancient DNA from many animals species, including crocodiles, I wasn't always a scientist and I think that crowd funding is a great way to let people know that everyone can be involved in science no matter what their background.

I had an interesting path to my career in science. You can check it out in more detail here, but I started out as an art student which is why, when I began to study crocodiles, I noticed all of the interesting paintings of "ceiling crocodiles" and the carvings of the crocodile god Sobek related to fertility and health. I happened to take a course on the history of evolutionary theory and was hooked. I switched to anthropology and began studying archeology while volunteering at natural history museums in Montreal, eventually landing a curatorial assistant position at Cal Academy in San Francisco. I think the combination or art history, natural history collections and conservation of crocodiles stirred my fascination with the ways in which people's belief systems intersect with science. Who can resist wanting to know more about the crocodiles hanging from the ceilings of apothecary shops? and who can resist the Crocodylus Apothecary Hypothesis?

Along with this project, we are analyzing genetic data from extinct crocodiles in Madagascar to look at patterns of recent colonization. One hypothesis that we are testing is that impacts associated with the arrival of humans and Nile crocodiles may have resulted in the extinction of Madagascar's endemic horned crocodile (Voay robustus).

Can a crocodile cure your ills? Testing the Crocodylus Apothecary Hypothesis

Happy New Year and many updates!

Dear colleagues!I am sorry it has been so long between updates. Part of this is because many components of the project are out of our hands, but partly it is because we have many other projects in ...

Hi Everyone,This is just a quick update to let you know that Taylor and I have begun sampling the specimens in the museum collections @AMNH and at the Smithsonian to fill in some samples and specie...

Hi Everyone,First, thank you to everyone who has already successfully made their contributions. We had a couple of backers whose payments didn't go through the first try, but that should be sorted ...

Hi Everyone,Sorry that I haven't had a moment to send a note out thanking everyone for funding this project. As soon as the funds are released we are going to schedule the  sequenci...

Hi everyone. Sorry for not getting to this sooner. I was busy with the opening of the AMNH croc exhibit. It has been a fun couple of days but I think it is important to comment on the Florida crocs...

Good morning everyone! In can you didn't see the news.. we made our goal! We are now funded for this project. Of course.. any additional funds will certainly be put to good use! ;) For now we can a...

A great day for Crocodiles!

I had the privilege of spending the morning talking with fellow scientists, kids and media about the new croc exhibit @AMNH "Crocs: Ancient Predators in a Modern World". So much excitement around t...

Hi everyone,First. I want to thank you all again for joining us on this project, and to remind you that we have 5 days left. If each of our current backers gets one more person to back us for $10, ...

Sooo....we are now 90% funded.. only $615 dollars to go. Let's all do one last push to see if any friends or family members are feeling left out! Tomorrow I will follow up with a post about the new...