Cancer treatment is a challenging, complex and exhausting process for the patient, their family and medical team. Chemotherapy kills both cancer and normal cells, and may not prevent remaining cancer cells from spreading. Our research team believes that by turning up a gene HEXIM1, it has a way to stop most cancers from spreading. This could make cancer treatment more palatable and effective and ultimately make cancer a more survivable disease.

Dr. Montano's lab studies a gene HEXIM1, which acts as a master control switch. Cells which have low levels of HEXIM1 divide rapidly, are likely to be cancerous and spread readily. Cells which are high in HEXIM1 are unable to divide or spread and are termed "differentiated". Typically differentiated cells form tissues and organs.

There are known chemicals called differentiating agents and some of these can increase the levels of HEXIM1 inside cells. One of these, HMBA, would be a useful chemotherapeutic drug, but has low potency and moderate toxicity. Dr. Montano and her collaborator Dr. Bin Su have made new HMBA-derived inducers of HEXIM1 with higher potency/lower toxicity for the treatment of multiple cancers including solid tumors such as those found in breast, prostate, lung etc.

Previously, we experimentally turned up (induced) HEXIM1 in mice either by genetic engineering or by administering the drug HMBA. We were able to inhibit the spread of breast cancer to the lungs in these mice, which are bred to have a highly aggressive form of breast cancer. Previous experiments with cultured breast cancer cells tell us which of the new HMBA derivatives induce HEXIM1 and are most likely to have high potency and low toxicity.

Dr. Monica Montano has been studying breast cancer for over 20 years. Since 1998 she has led her own lab as faculty at Case Western Reserve University in Cleveland, Ohio. Prior to this she completed a postdoctoral fellowship at the University of Illinois with Prof. Benita Katzenellenbogen (well known for studying hormones and cancer).

She earned her PhD in Reproductive Endocrinology from University of Missouri with Prof. Fred vom Saal (notable for his discovery of endocrine disrupting chemicals in plastics, like BPA). She still does benchwork daily, as well as guiding lab projects overall. Her lab is well trained in a wide variety of techniques and learns new ones as they 'follow the biology'.

The Montano lab was one of two groups to first identify HEXIM1, and the first to show HEXIM1's role in suppressing cancer, the main focus of this project.

Her 11 year old daughter is already interested in a STEM career and Monica promises to let her do her own Science Fair projects!
Montano Lab

A university press release about our work on HEXIM1 was picked up by a national news agency because we showed that HEXIM1 not only prevents the spread of breast cancer but also results in a healthy heart. This means that while most cancer therapy drugs have very harmful effects on the heart, the drugs which we are developing to increase HEXIM1 levels should have beneficial effects on the heart.

These are sections of mouse lungs and the arrows show where cancer cells have spread from the breast of untreated "control" mice (top panels). However in mice either genetically engineered to express increased levels of HEXIM1 (bottom left panel) or treated with HMBA to induce HEXIM1 (bottom right panel), the lungs are relatively clear of tumor metastasis. More potent derivatives of HMBA should improve upon these results, as shown by the clear lungs of the genetically engineered mice (bottom left panel).
These images were adapted from a peer-reviewed publication by the Montano laboratory in the journal Oncogene, and which was published last year. 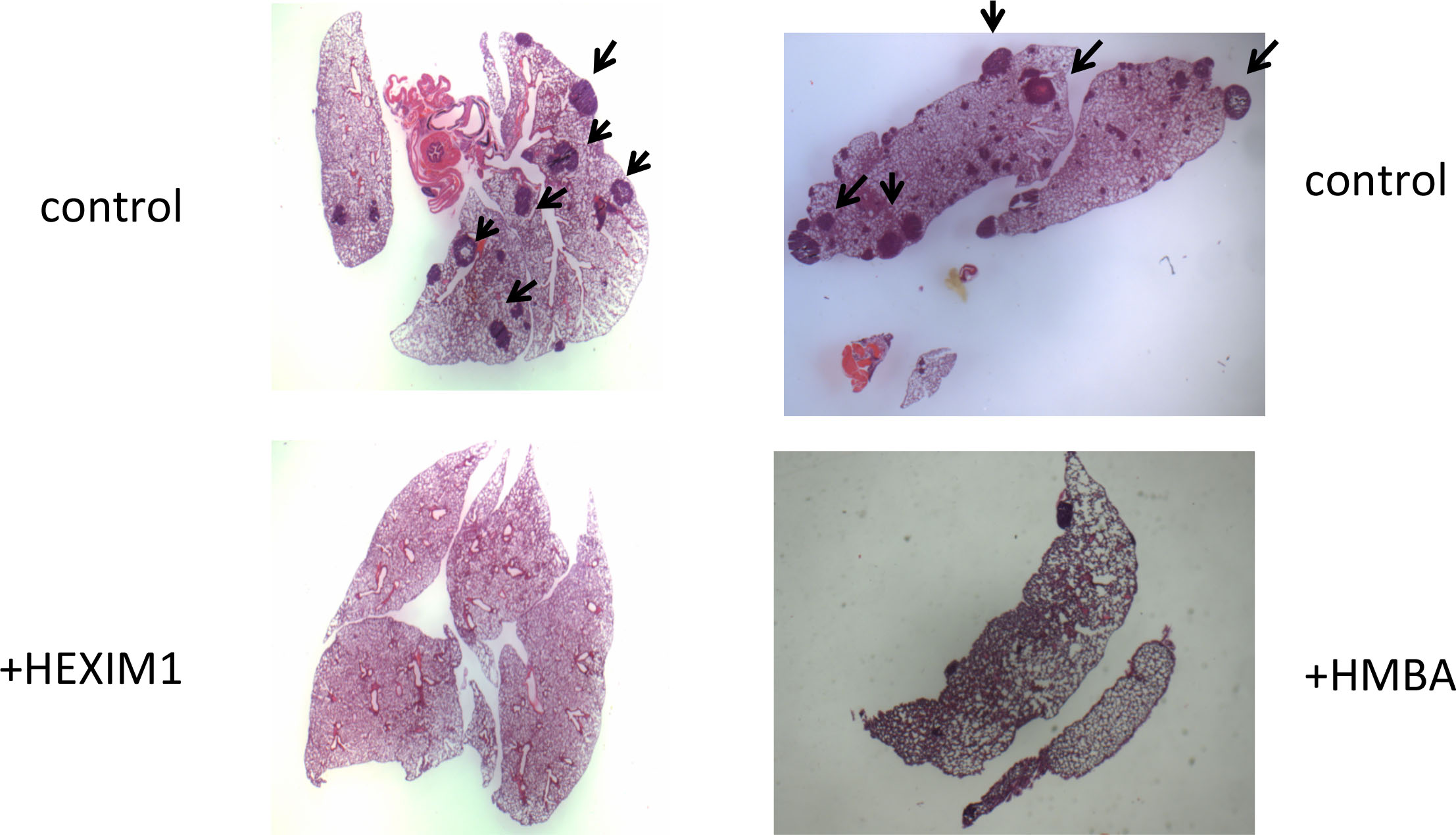