This study will investigate the effect of volcanic ash on ancient marine life from the Miocene epoch of Patagonia, about 10 million years ago. My hypothesis is that volcanic ash led to mass mortality of marine communities, and contributed to exceptional fossil preservation. This study will help determine how fossil marine communities responded to and recovered from large-scale environmental catastrophes, and how rapid burial in volcanic ash contributes to fossil preservation.

The interaction between volcanism and marine communities has received little attention in scientific literature, and thus requires further research. High sea level coupled with prolific volcanism during the Miocene epoch of Patagonia makes it a prime location to study this phenomenon. Marine communities became established in seas which flooded the continent, while the input of large volumes of volcanic ash had potentially catastrophic effects on sea life.

Based on reports of abundant marine fossils, and volcanic ash, I chose the Estancia 25 de Mayo rock Formation in southern Patagonia for this study. Here, the dramatic history of the interaction between large-scale Andean volcanism, and marine life situated in the shallow Miocene seas of southern South America can be studied.

This study will be used learn how both modern and fossil ecosystems react to episodes of rapid and catastrophic environmental change. The fossil record provides a unique opportunity to study not only the immediate effects of such a catastrophe, but also documents recovery from such events that may occur on timescales longer than the life of an average researcher.

Information loss due to the ravages of geologic time is an ongoing problem in paleontological studies. Volcanic ash provides a means by which exceptional fossil preservation can occur, preserving a strong biological signal which we can study. This research will provide the most comprehensive view of direct physiological, biological, and geological signals from marine death assemblages affected by volcanic ash.

The result of this project will be a comprehensive model explaining the effects of volcanic ash on marine communities. I will also develop a model for fossil preservation processes associated with volcanic ash. Finally, I will provide biological evidence from marine invertebrates for catastrophic ash fall events in the fossil record.

Field work for this project will occur during the austral Summer of 2017 (Jan-Feb). When in Patagonia, we will collect fossils and rock samples, and create detailed maps of fossil occurrences and rock sequences. We will return to Ohio and perform detailed chemical and physical analyses of the rocks and fossils, after which we will be able to reconstruct the past environment, climate, cause of death, and mode of preservation of the fossils.

Without funding for travel, this research will not happen, and a great opportunity for scientific discovery will be missed. Airfare to Argentina is expensive! Upon our arrival, we will meet with Dr. Silvio Casadio, and drive into the remote location of our field site, near Calafate, Santa Cruz Province, Argentina. I ask only for the cost of a plane ticket to the Buenos Aires International Airport, and a connecting flight to Calafate.

We will stay in Calafate, and commute to our field site daily. Exact costs of lodging are not known at this point, but based on previous expeditions, $1,000 should cover most expenses.

When we return to the U.S.A, we will have a LOT of data. Scanning electron microscopy (SEM), X-ray diffraction spectroscopy (XRD), petrographic microscopy, electron dispersive spectroscopy (EDS), and light microscopy can all be performed at Kent State University. However, other analytical methods, like isotope analyses must be outsourced to other labs, for a fee. 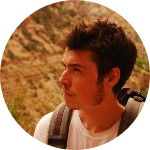 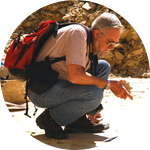 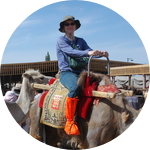 I have a BSc in professional geology and an MS in applied geology with a concentration in invertebrate paleontology. I am currently in the second year of my PhD at Kent State University. My research is focused on the connection between geological and ecological processes, and I'm particularly interested in the role volcanic processes play in mass mortality and fossil preservation of invertebrates, particularly crustaceans.

I conduct research on fossil decapod crustaceans and teach geology and paleontology at the Stark campus of Kent State University.

This video from a recent eruption in Japan shows just how deadly volcanic ash can be. It blankets large areas, and can preserve entire ecosystems in place. Like the victims of Pompeii, fossils preserved in volcanic ash in Argentina are preserved in place, and we can study exactly how they looked and what they were doing at the moment of death.