It has been estimated that <1% of viral species have been identified. Part of the difficulty with identifying and characterizing viruses is our lack of ability to culture most of them in a lab. Advances in sequencing technologies have made it possible for us to examine viruses without culturing them. This study seeks to determine the population composition and stability of single-stranded DNA viruses in the environment.

Unlike standard sequencing, where one genome is sequenced, high-throughput sequencing (HTS) is a technique used to sequence multiple genotypes at once. Using HTS we can collect samples of viral populations and sequence the entire population without having to isolate individual genotypes. I have developed a protocol to isolate the ssDNA viruses away from the larger viruses and microbial contamination so that all of the sequencing effort can be focused on my target group.

The ssDNA group of viruses contains common agricultural pathogens and model species. Therefore understanding the diversity and stability of this group can aide our understanding of new pathogens that arise and provide information about the natural diversity related to the model systems we use for lab-based studies.

The proposed project explores the geographic range and population stability of ssDNA viruses. This work will address a lack of information on community stability that will help us understand how often environments experience viral turnover. Understanding the composition of viral populations will allow lab-based study to better mimic the natural world. The results will determine 1) the breadth of diversity, 2) the geographic range, and 3) the stability of the genotypes present in these viral populations.

I have collected a time series of 15 samples from 3 different wastewater treatment plants.

With this funding I plan on processing the DNA and preparing the samples for sequencing on a high-throughput sequencer.

If I exceed my funding goal the additional money will go towards the cost of sequencing the samples.

I was able to collect and begin processing the samples using general lab funds and communal equipment, however there is no funding available to me to finish processing the samples. This funding will allow me to complete this project, which is the bulk of my PhD dissertation. Therefore by funding this project you will not only help me finish this set of experiments, but will also provide the final funding needed for me to complete my dissertation and graduate. Any donation you make will be greatly appreciated!

$25 - If you donate $25 or more you will receive an acknowledgement in any resulting publications or presentations.

$150 - If you donate $150 or more you receive the above, plus I will send you a certificate with interesting facts about your virus. 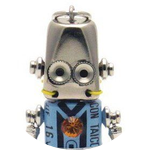 I grew up in rural Maine and spent my childhood exploring the world of insects and amphibians around my house. When I grew up I decided to channel this interest into a career.

I obtained my undergraduate degree from the University of Maine at Farmington. While there I took field courses exploring the diversity of insects in Maine and reef fish in the U.S. Virgin Islands. During this time I also traveled up the Amazon river and completed an internship at Mote Marine in Sarasota, Florida. All of these experiences solidified my interest in the diversity this planet holds.

As an undergraduate I started researching the microbial world while investigating the relationship between antibiotic resistance and coevolution in bacteria and viruses that infect them. This led me to pursue a graduate degree at Florida State University renewing my childhood interest in natural diversity by studying the viral world.

12 Lab Notes Posted
We have data!!!!!
Materials are arriving!
Update #1

To date a sample collected from Tallahassee's wastewater treatment plant has been sequenced and analyzed. Additionally, I have collected and processed samples from three plants over an eight month period, which will allow for geographic range analysis and temporal studies. From the sequenced population the individual capsid and replication genes were identified and compared to their top hit in the national database. This allowed us to identify 86 viral genotypes that were previously unknown and are so diverse from anything previously seen that they probably belong to new viral families!

It was common to find viruses where the capsid and replication genes would not share closest matches. In some cases their closest matches belonged to different families (particularly between Circoviridae and Geminiviridae), and in even rarer cases only one gene would have a match and the other gene had no match, and was therefore completely unlike anything known. As the genotypes found were rather dissimilar to previously described viruses, this study also examined how similar the viruses in this community were to each other. To determine this, both the capsid and replication genes for each virus were compared to each of the other viruses via pairwise comparisons. This uncovered a high degree of intracommunity diversity.

This is one of the tanks where I have collected viral samples. At this particular location I used a dipstick to collect a sample out of the tank and then would pour the sample into my collection vessel. Luckily I have not yet dropped anything into one of the tanks, or worse, fallen in! 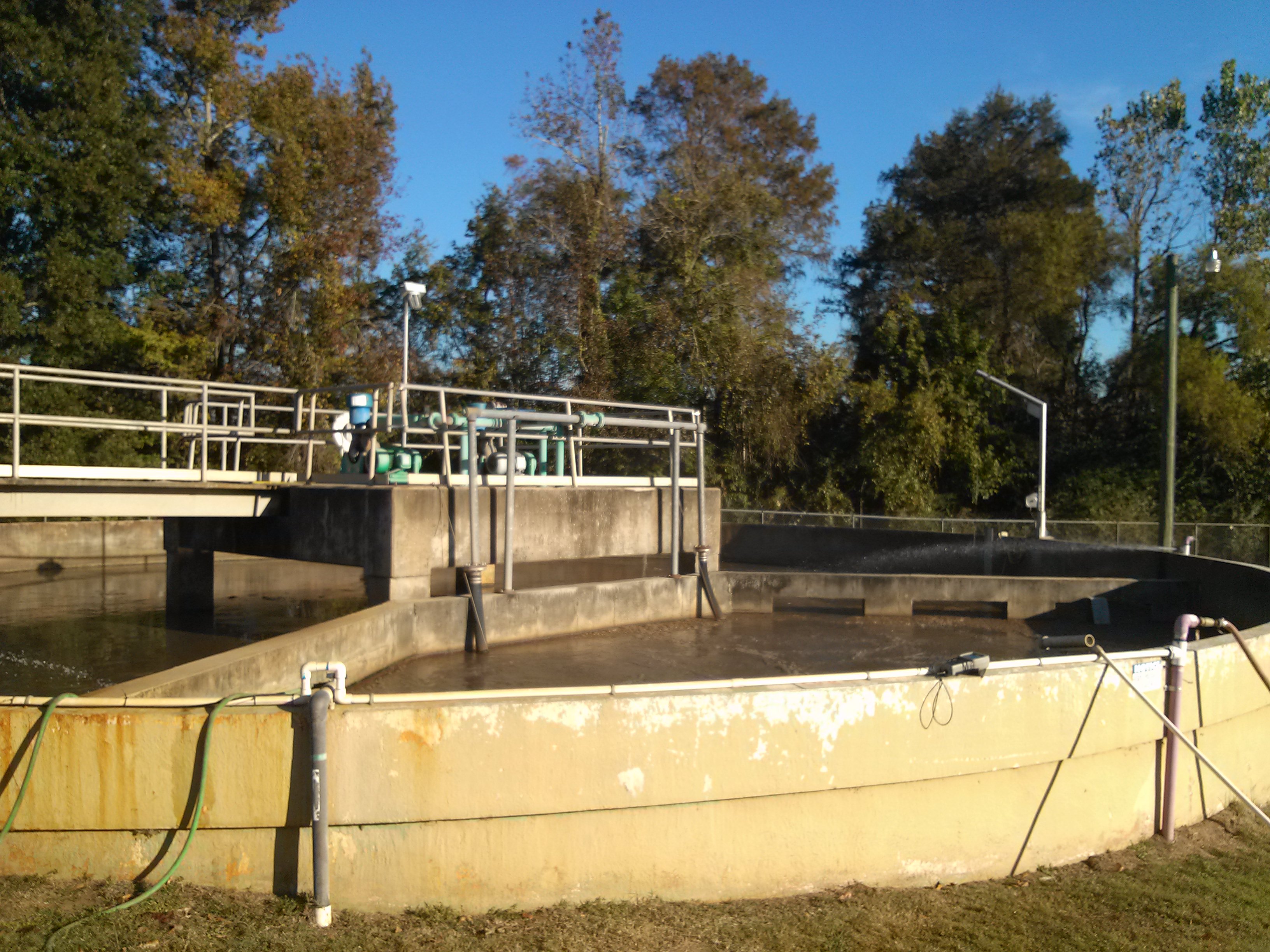 This is me holding a sloth at a small village on the Amazon river. The children living in the village keep sloths as pets and one of the little girls let me hold hers as we passed through. 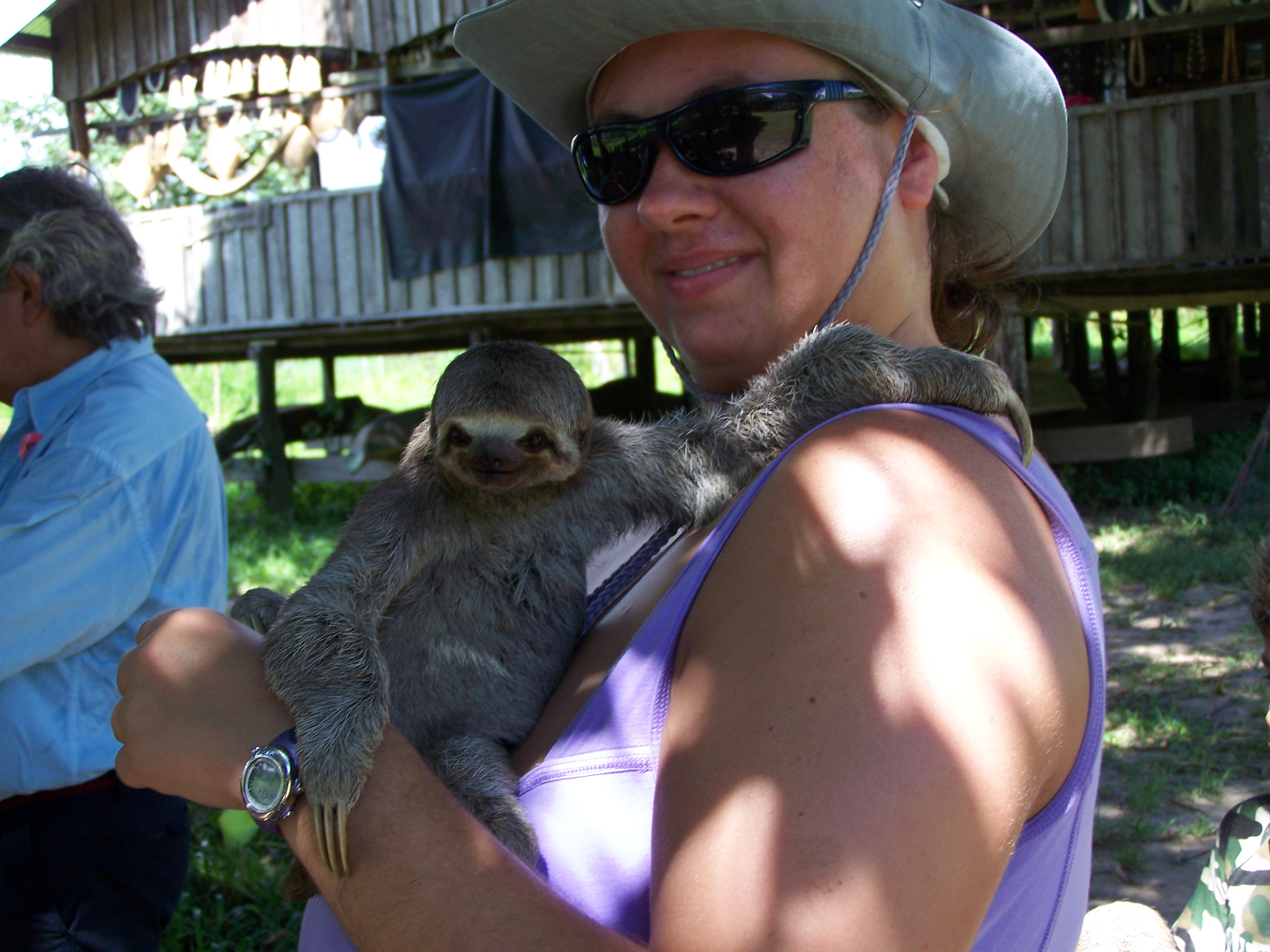 My daughter showing off her new unicorn pajamas with our cat, so happily, sporting her inflatable unicorn horn Christmas morning. 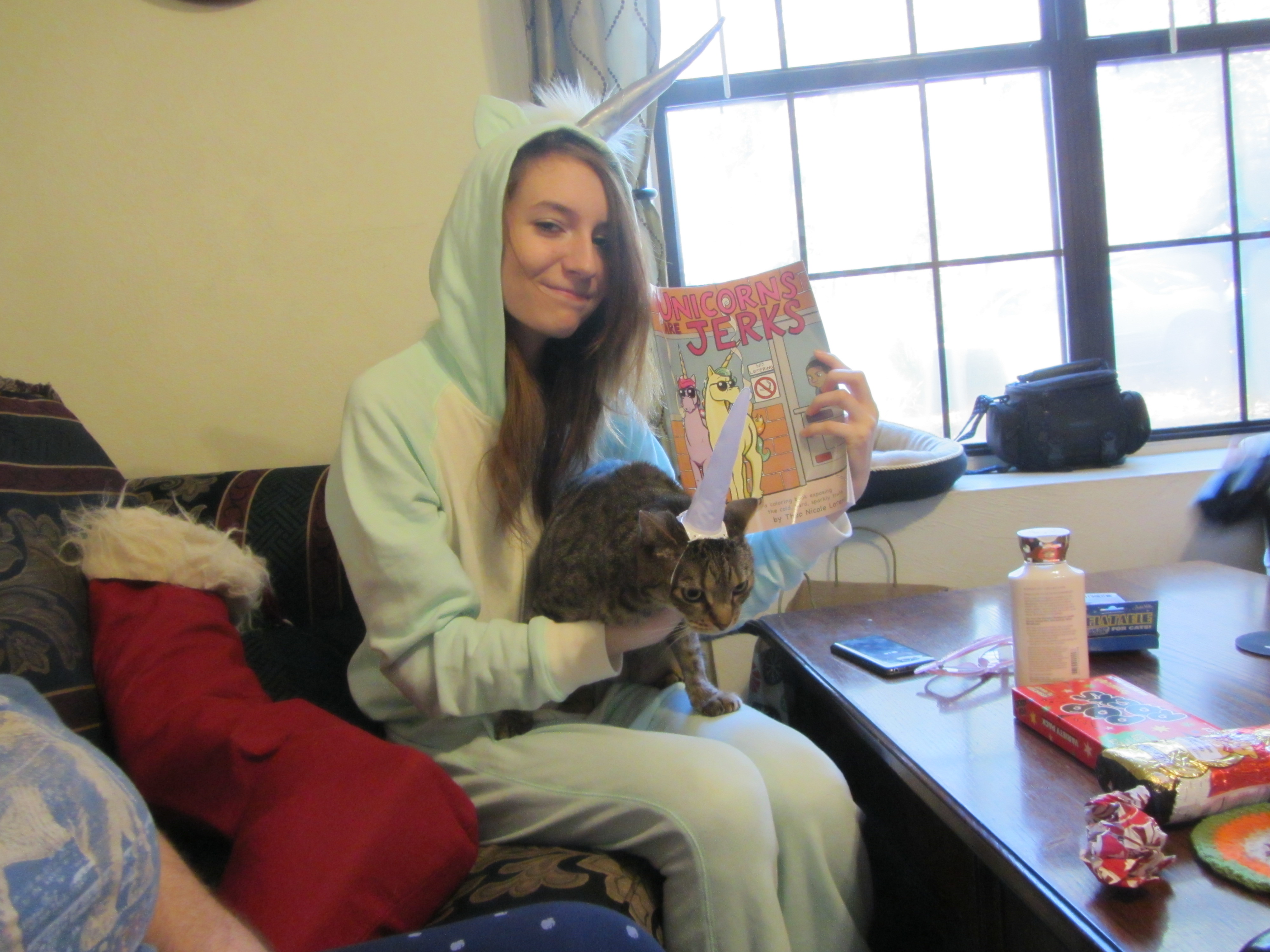 Took this photo a few months ago when we all went fishing on Lake Miccosukee near our home. As we are in Florida you can see several alligators in the lake. The alligators had a much more successful fishing morning than any of us! 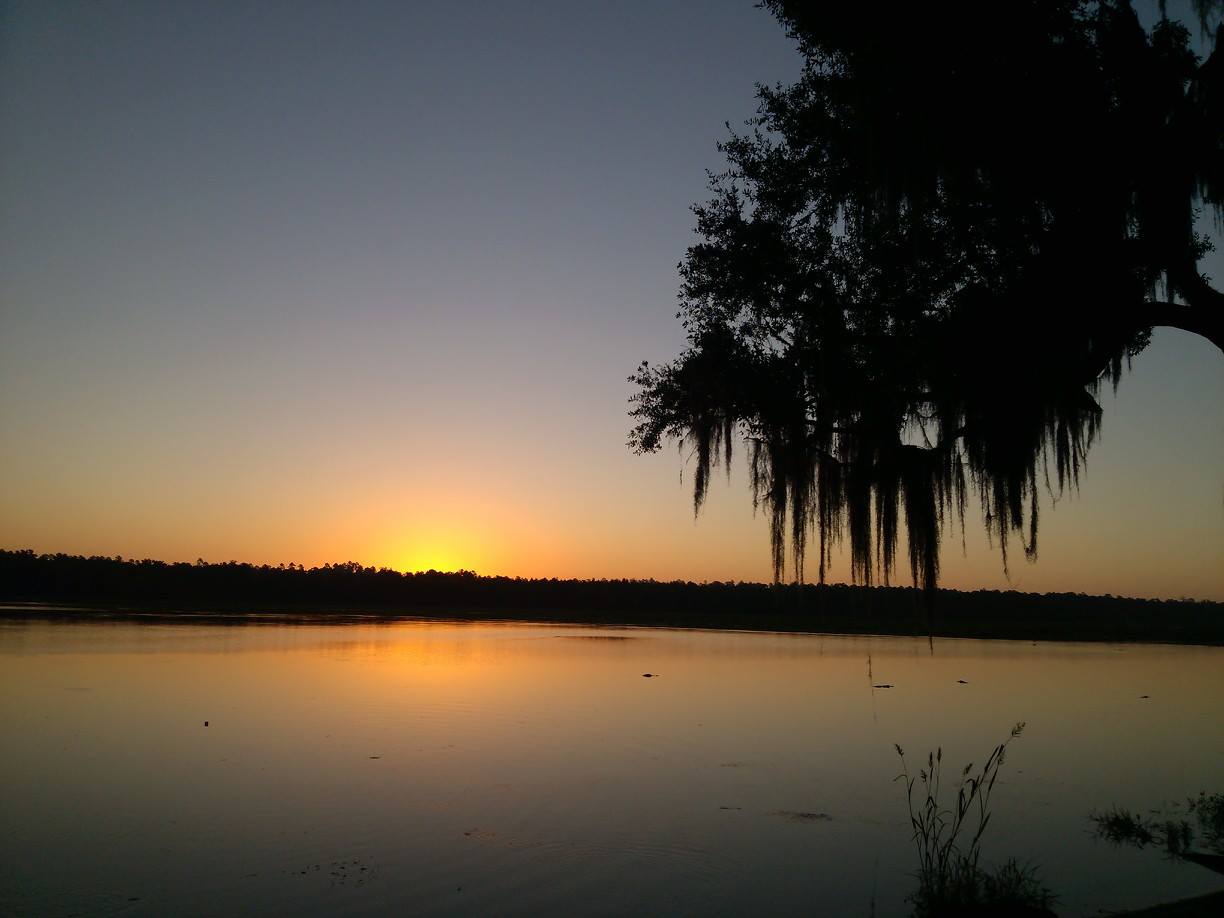 One of my hobbies is baking and these are my first attempt at making french bread. I'm much better at making things taste good than I am at making them look presentable. One day I will make a loaf of bread that is actually symmetrical! 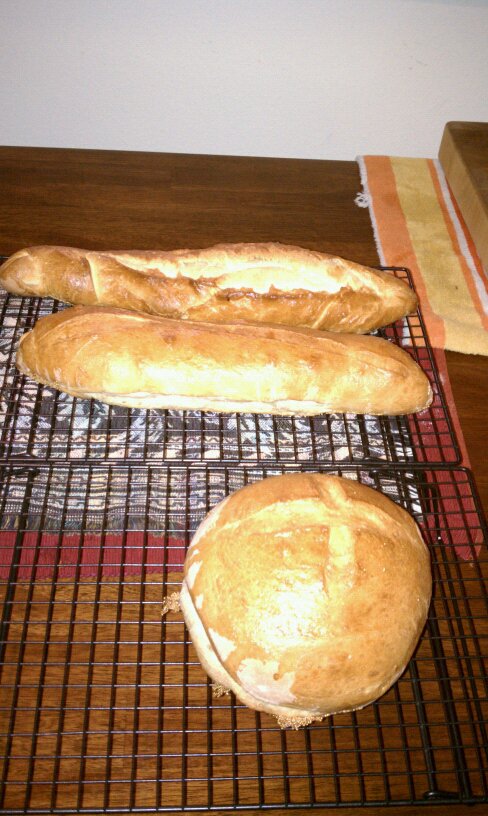