The effects of protein ingestion in conjunction with exercise on muscle protein synthesis will be measured in a randomized, double blind study design. There will be two factors: total daily protein will be either low (LP = 1 g/kg/d) or high (HP = 2 g/kg/d), and timing of supplementation will be either immediate (IPE) or delayed three hours (DPE) after exercise (Figure 1). A non-intervention control group (n=10) will provide a baseline reference for the intervention groups. The control group will not modify their current exercise or diet, but will log all meals and activity.

The exercise protocol performed during this study will consist of both sprint and resistance training in order to mimic actual athletic training and to maximize strength and power. The highest protein recommendations currently given are for strength and power athletes, so we expect to see the largest difference in this group. Subjects will perform 10 sets of 30-second sprint intervals (conducted at 110% peak power output) with 30 seconds of active recovery (conducted at 50% peak power output). After a rest period, subjects will then warm-up for each resistance exercise (bench press, leg press, lat pulls, and leg extension) before performing three sets to failure at 80% of their one repetition maximum.

Subjects will undergo two weeks of exercise and diet familiarization (8 exercise sessions), during which time they will ramp up the intensity of the exercise protocol while following their assigned level of protein intake. They will log meals and physical activity on all training days, and will photograph their plate before and after meals for verification purposes. After the familiarization period, baseline measurements will be taken for body composition, strength, and power. Body composition will be measured with a DEXA (dual energy x-ray absorptiometry) scan to get whole body percent fat, fat mass, lean body mass, and thigh lean mass volume. Isokinetic and isometric strength of quadriceps and hamstrings will be measured using a Kin-Com machine. One repetition maximums will be obtained on Keiser equipment for all exercises conducted during the study. Measures of maximum and relative power will be obtained using a Power Cycle SS. All of these measures will be taken again 48 hours after the final exercise bout. Subjects will then complete 2 weeks of the intervention study (8 exercise sessions) in the same fashion.

Muscle protein synthesis will be measured using deuterium oxide (Figure 2). Deuterium is also known as "heavy water" because it has a tracer incorporated onto water's hydrogens. Deuterium rapidly equilibrates within body water pool and exchanges its labeled hydrogens during normal metabolic processes, such as protein synthesis in the muscle. This means that any formation of new proteins will be labeled with this hydrogen in proportion to total deuterium availability, which is measured through blood draws. 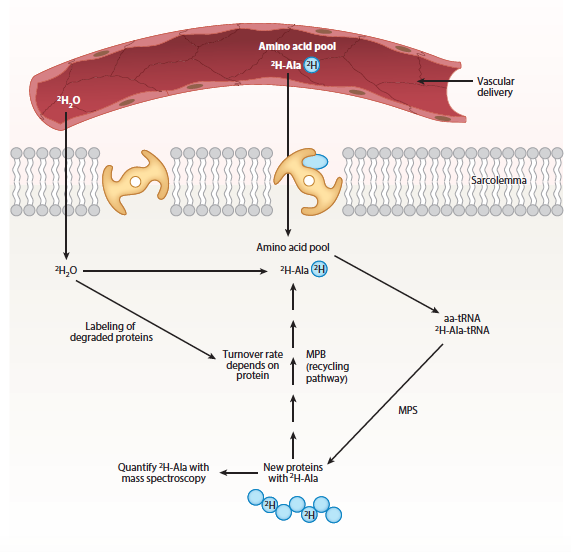 In order to measure how much deuterium is incorporated into new proteins during the post-exercise recovery period, muscle biopsies (from vastus lateralis) must be attained from each subject. This will be performed immediately before the final bout of exercise and again 24 hours post-exercise. Analysis of the muscle biopsy together with blood draw analysis will allow measurement of cumulative protein synthesis (fractional synthetic rates, FSR) over the 24-hour post-exercise period according to the following equation:

On the final days of the experiment, subjects will consume four boluses of the deuterium and obtain a blood draw after each ingestion to confirm maintenance of plasma deuterium levels. They will follow a prescribed diet to ensure they follow their calorie and protein requirements exactly. They will report to the lab 24 hours later to receive their second biopsy and final blood draw. They will perform all follow-up measurements 24 hours after the biopsy is obtained. Timelines of the study as well as the two experimental days (48 hours after final exercise bout) can be seen in Figures 3 and 4.

Recruiting and enrolling individuals could potentially be a challenge. The main criteria for enrollment in the study is involvement in both aerobic and resistance training for at least one year. The population from which subjects will be recruited is a ROTC-type group on campus with over 2000 student participants. Therefore, it should be feasible to find 50 students who fit our enrollment criteria.

Adherence to the study diet is always a challenge for dietary interventions. To maximize compliance, investigators will attend lunches and dinners on training days to observe food choices and ingestion of protein sources. Subjects will photograph their meals before and after as verification of their food logs. Previous analysis of food logs has indicated that variance in food logs is minimized with 10+ food logs, and this study will have 16.

A power analysis has been conducted to determine that a sample size of ten subjects per group provides adequate power (1-β=0.8) to detect differences in 24-hour fractional synthetic rates (% per day) between groups (β=0.2, α=0.05). Based on variance of previous data, the effect size was estimated to be 0.68 standard deviation units. With this effect size, a per-factor number of subjects to provide adequate power is 14-16 individuals. This study will have 20 individuals per factor, so if any significant differences do exist, there will be adequate power to detect them with 80% confidence.

The hypotheses for this study are the null hypotheses: (1) daily protein needs are not increased with regular activity, (2) timing of protein supplementation does not affect rates of muscle protein synthesis, and (3) there are no interaction effects between timing of protein supplementation and total daily protein needs. Rates of muscle protein synthesis will be analyzed using two-way ANOVAs to detect differences in interventions. Intervention groups will be compared to the non-intervention control using pairwise t-tests.

We anticipate very low variance in our data due to the homogeneity of the population being measured. These subjects eat in the same dining hall, engage in similar training and other daily activities, attend classes, have similar sleep patterns, etc. Thus, variance in the data should be minimized and normally distributed.