Human population growth in the San Francisco Bay Area has degraded wildlife habitat and has led to the loss of mountain lions from Marin County. Now human actions also threaten the bobcat population: bobcats in modified habitats are more likely to be genetically isolated, exposed to pathogens from pets and in contact with human-released environmental toxins. We will non-invasively collect samples from bobcats in Marin to determine the genetic health of this population.

As carnivores, wild cats, including pumas and bobcats in the US, also provide incalculable benefits to humans. For example, carnivores decrease the prevalence of prey species (e.g., deer, rodents) -borne wildlife diseases by preferentially preying upon sickened wildlife and by assuring no single prey population gets too large. Unfortunately, despite their integral importance, many wild cat species are under threat of local or global extinction. An example of this local extinction is with pumas which are thought to be nearly or completely extirpated from Marin County, California. Our goal with this project to is protect the last remaining wild cat species in the area, the bobcat, which now appears to act as one of the apex predators in the area along with coyotes.

Between 1990 and 2010 the Bay Area saw an 18% growth in human population, and current forecasts predict an additional 1% growth per year until at least 2040. As a result, anthropogenic pressure on wildlands and wildlife is extensive and has brought habitat fragmentation and disturbance to former quality habitats. Data from this project will expedite future wildlife habitat connectivity efforts in the Bay Area which will bypass some of the issues of habitat fragmentation. Additionally, this project will help us promote human-wildlife coexistence because the data will be used to update our community programs which provide education to students and local residents throughout the SF Bay Area.

With a team of Felidae staff and volunteer citizen scientists, we will scour 60 sq km of trails in Marin over a 2 week period to non-invasively collect bobcat scats. Genetic data from the scats along with associated metadata will be used to determine absent but much needed baseline information about bobcats in Marin: how many bobcats are there? where are they living? how large are their home ranges? and, are they healthy?

Funding has already been acquired to permit the collection and drying of 75 bobcat scats from Marin county (via private donations and CuriOdyssey). The requested budget items to allow us ship our samples to our colleagues at Oregon State University who will then extract DNA from the samples and complete genetic analysis of the samples by testing the DNA samples for microsatellites. Microsatellites are commonly used in population genetic studies to determine relatedness of individuals and overall genetic health of a population.

As human populations continue to get bigger, our impact on the environment continues to change. This project will provide information on how different types of human habitation influence big cat populations. 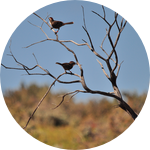 Andrea Liebl
Assistant Professor
University of South Dakota
This should be an interesting project- persistence of predators in the urban interface is an increasingly important topic. We are looking forward to collaborating on the genetic analyses. 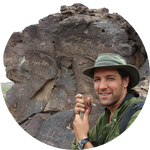 Lab work be completed by Sept 2018 with preliminary analysis completed by Jan 2019. We will then complete a statistical analysis of factors contributing to bobcat habitat preference and genetic diversity with the help of colleagues at Utah State and University of South Dakota using a combination of our lab results and ongoing camera trapping efforts. We expect analyses to be complete by April 2019, with a manuscript shortly following. 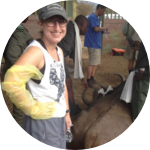 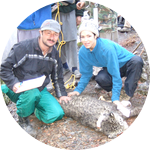 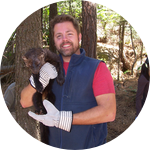 I formed Felidae in 2006 to employ a new conservation model targeting complete ecosystem health and preservation of biodiversity. I have worked on four continents to advance the conservancy of in situ wild felid populations in some of the most remote regions on the planet, and currently direct the Bay Area Puma and Bobcat Projects in the SF Bay Area.

As a trail ultra-runner, and former competitive marathoner, I value the presence of native felids in the wild places of the Bay Area. I hope our work can raise public awareness and appreciation for the natural world, and draw support for this increasingly fragile ecosystem,

Brad is originally from southeastern Ohio and received his bachelors degree in Wildlife Resources from the University of Idaho in Moscow in 2005. He earned a masters degree from Utah State University in Logan in 2017 while conducting research on mountain lion prey composition, kill rates, and resource selection in the Sierra Nevada Mountains near Shaver Lake, CA. He has always had an interest in carnivore research, conservation, and public outreach/education. Prior to his graduate work, Brad spent 7 years studying fishers and assisting the Integral Ecology Research Center with studies focused on mesocarnivores such as bobcats, grey foxes, martens, and ringtails also in the Sierras of CA; researched lynx in northern Maine, red wolves and black bears at the Alligator River National Wildlife Refuge in NC, and black bears in OK. He also spent time volunteering at the Grizzly and Wolf Discovery Center in West Yellowstone, MT and the Wild Spirit Wolf Sanctuary in Ramah, NM; as well as, worked as assistant education director and animal enrichment/caretaker at the Beartooth Nature Center in Red Lodge, MT. He has been working at Felidae Conservation Fund for the Bay Area Puma Project since September of 2017.

3 Lab Notes Posted
A timeline has now been confirmed for this project by our...
untitled
Bobcat fresh scrape and scat