75% of Tanzania’s chimpanzees live in open “savanna” woodlands. Considered a marginal habitat due to low food and water availability, savanna woodlands cannot support as many chimpanzees as tropical forests. As a result, savanna chimpanzees have vast home ranges, up to 20 times larger than their forest dwelling cousins. We aim to determine how chimpanzee social organisation adapts to living in such marginal conditions.

Despite over 50-years of research on wild chimpanzees, we still know little about their natural behavioral range. Most of what we know comes from a limited sample of forest-dwelling populations. In Tanzania, most chimpanzees actually live in a very different environment, one of <5% evergreen forest, often termed 'savanna'. The behavioral consequences of living in such an environment are unknown. We aim to understand how these apes, humans closest living relative, have adapted to living in savanna woodland in Tanzania.

Chimpanzees, like humans, and unlike most mammals, have a fluid social structure whereby sub-groups fission and fuse in response to ecological or social factors over hours, days or weeks. Males form linear dominance hierarchies, whilst females are more egalitarian and disperse from natal groups. Resident males defend territories through boundary-patrols and sometimes show lethal inter-group aggression. In contrast, savanna chimpanzees live in vast home-ranges at densities up to 50 times less than their forest cousins: whether they also these patterns of fission-fusion, territorial defense, or male dominance and patrilocality, whilst living at such low densities remains unknown. For example, it may be that basic fission-fusion social structure breaks down, due to low densities and sparse resource availability. If so, the received wisdom of female-only dispersal from chimpanzee communities may not apply on the savanna. Using genetic markers of sex dispersal can resolve this question. We aim to use genetics to test whether savanna chimpanzees have adapted to a dry environment through an expanded home range, cohesive association, and flexible dispersal.

Since 2008, we have collected over 2000 chimpanzee fecal samples from our core study site, Issa, in Ugalla, western Tanzania. Thus, generating genotype data from these samples will allow us to identify individuals across the landscape. We will use social-network analysis to determine the number of individuals in, and the structure of, the Issa community. These analyses will determine whether savanna chimpanzee community and population structure resemble that of forest-dwelling chimpanzees.

To date, no genetic studies have been conducted on savanna-dwelling chimpanzees. This is in direct contrast to what has been done on, and overall, what is known about forest-living chimpanzees. The term ‘savanna’ encompasses a range of habitats, although all have grass understories, low rainfall, little closed forest vegetation, and have similarities to those characterizing the ecology of early human ancestors’ (hominin) evolution. Many researchers have proposed that chimpanzees living in dry habitats provide important data for modelling early hominin behaviour and adaptations as the problems that hominins faced in savanna woodland mosaics were likely similar to those faced by savanna chimpanzees. Ugalla chimpanzees live in an environment described as one of the hottest, driest, most open habitat of the chimpanzee ecological range providing an essential contrast to forest-dwelling chimpanzee behavioural ecology. The proposed research will inform on chimpanzees’ adaptation to this ecological edge, and so provide insight into selective pressures that shaped early hominin social structure and the evolution of our species.

Ugalla chimpanzees also live in an environment more similar to that of most of Tanzania’s 2500 remaining chimpanzees. This is in direct contrast to the primary evergreen forest habitat where most chimpanzees have been studied across Africa. Only through understanding how these dry-habitat chimpanzees have adapted their social system, dispersal, and ranging patterns, can we hope to construct and implement effective conservation strategies to protect chimpanzees into the future.

We aim to test hypotheses regarding how savanna chimpanzee social structure, ranging, and dispersal may differ from that of forest chimpanzees. To address these hypotheses we aim to complete genetic analyses of 450 fecal samples already collected from Ugalla. These data provide:

1) a DNA-fingerprint, or genetic ID, for each sample, which, in combination with spatial data, allows us to track chimpanzee association patterns across space and time. We will use these data for social-network analysis, to reveal the number of individuals, whether they associate in a single community, and the size of their combined home range. 2) haplotypes that indicate relatedness, via the maternal lineage (mitochondrial DNA) or the paternal lineage (Y-chromosome). These markers also reveal a genetic signature of whether males or females disperse from their natal group.

Such data will address hypotheses such as: (1) in order to maintain social relationships across vast home ranges at low densities, savanna chimpanzee social structure is hypothesized to be more cohesive than forest living chimpanzees, with individuals ranging in more spatially and temporally stable social groups, akin to monkeys; 2) Given large home ranges and low densities, genetic signatures of patrilocality are hypothesized to be weaker in savanna, than forest chimpanzee communities.

With your support we will achieve three important goals. First, we will complete DNA-fingerprinting in order to estimate the size, and association patterns of Issa chimpanzees. Second, we will expand our sampling of Ugalla’s chimpanzees into peripheral areas, adjacent to the core study area Issa. Third, our results will directly inform conservation policy that aims to protect Tanzania's chimpanzees.

We expect these surveys and analyses to require a combined six months. However, we will provide donors with monthly updates, not only describing exciting stories from the African bush (!), but also on the progress of the genetic analyses and what they are revealing.

Your support will us to complete individual genotyping of 450 fecal samples collected from within the Issa study area, and also to survey peripheral areas. To do so, we will use DNA extraction kits and PCR Reagents for Genotyping that we have successfully used in our previous work. Genotyping individuals from these peripheral areas is critical to establishing the actual range of Issa males. Further, your generosity will support three Tanzanian field assistants who will lead these surveys.

The Jane Goodall Institute has collaborated with Alex and Fiona for many years; Their surveys of western Tanzania have been instrumental in developing conservation strategies and identifying conservation priorities. The results of their proposed genetics study will provide important insight into wild chimpanzee behaviour that will help further protect these endangered apes. 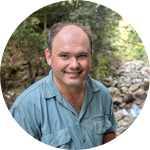 Lilian Pintea
Vice President, Conservation Science at the Jane Goodall Institute
the Jane Goodall Institute
UPP’s detailed survey and DNA analysis of western Tanzania's chimpanzee population has been a tremendous help to our conservation efforts in the region. It’s helped us to focus limited resources on the parts of the forest that are most important for chimpanzees and other wildlife. In September UPP trained a class of forest scouts recruited by local villages to patrol and monitor several of these high priority sites. The information the scouts gather helps their communities improve forest protection, it helps us to enhance ongoing land use planning and protection efforts and it helps UPP understand how chimpanzee numbers, health and behavior are changing over time. 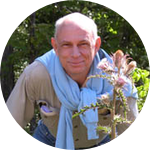 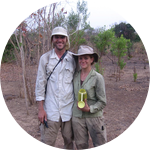 We have been studying savanna chimpanzees since 2003, beginning first in Senegal and since 2005, at Ugalla, in western Tanzania. With our collaborators, we have created
The Ugalla Primate Project – an international consortium of researchers interested in savanna chimpanzee behavioural ecology and conservation. Whilst we focus on chimpanzee adaptation to this marginal habitat, we simultaneously study sympatric monkeys and large mammalian fauna, and collaborate with local and international conservation organizations to reduce the threats to and increase the protection of ape habitat.

Recently, we have benefitted from new technologies to aid our mission, from deployment of remotely deployed motion triggered cameras and acoustic sensors, to testing of unmanned aerial vehicles (UAVs) to collect data. We oversee a team of seven full-time Tanzanian staff who, like us, are devoted to increasing our understanding of the Ugalla fauna, and specifically its savanna chimpanzees.

Alex:
I am a PhD candidate at the University of California, San Diego and visiting researcher at the University of Cambridge, UK. I have studied wild primates since an undergraduate, having worked in west (Senegal) and East (Madagascar, Kenya, Tanzania) Africa. My focus now is on endangered chimpanzees living in a marginal habitat in western Tanzania. These apes are interesting from both an anthropological as well as conservation perspective. They live in similar conditions to the earliest human ancestors, and so offer a window into the origins of the human species. This environment may demand an entirely different type of social organisation not before observed in chimpanzees. Since 2005 I have co-directed the Ugalla Primate Project which seeks to answer these questions of behavioral adaptation, as well as help protect Tanzania's remaining chimpanzee population. _____________________________________________________________
Fiona: I am currently the Wheldale Onslow Research Fellow at Newnham College, University of Cambridge, where my primary research interests surround the behavioural ecology and conservation of savanna chimpanzees. My first degree is in Zoology from the University of Glasgow, where I developed initial interests in tropical biology, studying wild hummingbirds in Ecuador and dry habitat chimpanzees in Senegal. After completing my PhD in 2011 I conducted a land-scape scale survey of western Tanzania's chimpanzee populations, using genetic census techniques on non-invasively collected faecal samples, to prioritise areas for conservation and investigate gene flow and population connectivity. Since 2005 I have conducted research in Tanzania where I co-direct the Ugalla Primate Project. We are interested in the behavioural flexibility of chimpanzees, in particular, how savanna-woodland dwelling chimpanzees have adapted to such a dry environment.

A belated, but nonetheless worthy update!

Active chimpanzees in the field! Our most senior field assistants, (from left) Msigwa, Shedrack, and (on far right), Busoti - regularly lead our surveys to peripheral areas of the study site. These men have worked on the Ugalla Primate Project for a combined 22 years, and have an intimate knowledge of chimpanzee behaviour and regional geography. Without their commitment, loyalty, and hard work, the UPP would not be the success that it is. To them, and each of our field assistants, we are eternally grateful (photo credit: Caspian Johnson, pictured).