Admixed populations that have accumulated changes resulting from barriers that prevent genetic exchange offer a unique view by elucidating the evolution of reproductive isolation while still in its earlier stages.

Understanding the extent of genomic divergence among populations that remain in contact, as well as populations across geographic barriers, can reveal the relative strength of evolutionary forces that mediate lineage diversification.

These forces ultimately influence whether populations will remain distinct and continue to accumulate differences. There is tremendous potential for the application of genomic technologies for understanding diversification at the molecular level. This research is well suited for public outreach. By studying divergence in a well-known charismatic species, such as the red-eyed treefrog, my research can be used to create media that will attract attention and inform the public of the processes of evolution and the importance of understanding biodiversity.

I will analyze genetic data from newly sampled populations along with 120 previously collected samples from 22 populations throughout Costa Rica and Panama. I will use ddRADseq, an efficient and cost-effective sequencing technique suitable for non-model organisms.

In order for this project to be a success, I need to travel to Panama to collect genetic samples from four populations along the Caribbean coast. These populations exhibit the highest level of variation relative to all other Central American populations. Exploring these hard-to-sample areas is crucial for understanding the evolutionary history of this region. Your generous donation will cover travel costs to Panama and allow for a 3-week field season. I will be the first to collect genetic data from the northern regions of provinces: Comarca Ngobe-Buglé, Veraguas, Coclé, and Colón. Traveling to and from these sites requires a rental car and sampling requires travel by horseback, foot, and canoe. I will consult local field guides to assist in locating red-eyed treefrog populations. We will collect non-lethal DNA samples from frogs found in lowland swamps and return individuals to where they were found. All funds raised will go toward transportation, field supplies, and lodging. 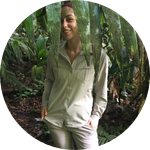 My fascination with biology was ignited when I began to approach concepts in the context of evolution. I chose to study biology because I genuinely found every subject, from molecular biology to ecology, interesting. That interest quickly grew into passion when I realized that evolutionary theory could disambiguate and explain the interrelatedness of all aspects of this field. I am therefore eager to study the factors that govern evolution. My goal as an aspiring biologist is to examine the forces that exert selective pressures on populations, and to understand how that leads to adaptation and diversification.

I plan to pursue a PhD after earning a Master's from California State University, Northridge. Having been inspired by my professors and mentors, I hope to ultimately apply my knowledge towards educating future scientists.

3 Lab Notes Posted
Highway to the Contact Zone!
Loading a Gel and Feeling Swell
Updates from the Lab