After conquering the Great Lakes, what will the invasive Round Goby do to fish in our streams? Four years ago, a local dam being removed provided a clear time to start surveying. The opportunity was recognized, but funds for this spring were stopped by budget changes. We have seen the goby move 23 km upstream and Johnny Darter numbers drop 90%. Longitudinal data may indicate if the young fish are disappearing. The goby is now nearing the headwaters.

The Round Goby (Neogobius melanostomus) probably hitched a ride in ballast water from the Black Sea to the Great Lakes in 1990. Since then, the gobies have spread from harbors throughout 4 of the 5 Great Lakes. (Lake Superior is too cold.) Being a creature that came from the bottom of a sea, few expected the goby to start moving into streams. With the current rate of dam removals (72 dams in the US removed in 2014) and the migration of Round Gobies to the upper Mississippi River, we need to understand the long-term effects of this invasive fish on all aquatic habitats. Decisions about fishing laws, public education, culvert replacement, and dam removal projects would be better informed.

There are few studies of Round Gobies invading streams. Many of these studies used stream-shocking, where electricity stuns the fish which are then dipped out. Benthic fish drifting along the bottom can't be seen in turbid water and are missed by stream-shocking.

In August 2012, the dam on the Lower Rouge River at Wayne Road was removed allowing an established population of Round Gobies in. It is rare to have a known time of introduction with an invasive species. We use kick-seining, which is more labor intensive, because people have to chase the fish into the net, but better suited to capturing benthic fishes.

This natural experiment is a unique opportunity. We have 4 years of data (31,806 fish identified and measured so far). If we miss a year, that data slice will be lost forever.

By August 2017, this season's fish surveys will be finished. First, on the Lower Rouge, two branches will be checked for further upstream invasion, and two older sites will be surveyed for data validation. Then, in the Middle Rouge River, where the goby appeared near the midpoint, upstream will be surveyed for further invasion, and the downstream invasion will be checked on the Main Rouge, upstream of the confluence. Per site, 100 meters of stream will be sampled with a minimum 5 person crew for approximately 1 hour using a 12x4' seine, targeting both benthic and pelagic fish in all habitats. All fish will be identified to species, lengths recorded to ½ cm, and all non-gobies released. Data will be analyzed in a Excel spreadsheet, then shared locally and regionally.

We have 5 days of seine surveying scheduled. In addition to 2 technicians at $16/h, we need 3 volunteers every day to drive benthic fish into the nets. The volunteers have been providing their own transportation, and we wish to reimburse some of their costs. Equipment will be worn out after two years, so we'll need to replace what we currently have. We are also offering prints of actual fish caught to supporters .

Great project! Somebody needs to look at this critical situation of round gobies displacing native fish. 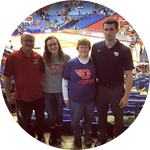 Public event will be held stream-side in May or June of 2017.

Surveys will be completed in May and June of 2017.

Photos will be ordered to our large supports. 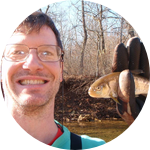 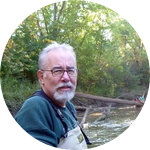 Bob’s hunt for an internship lead him to survey for the Michigan state-endangered Redside Dace for Friends of the Rouge. Philip volunteered on this survey. A conversation with his professor about why a dam had been removed lead to a study and three years of grant money from The Graham Sustainability Institute, Water Center. Funding came from Dr. Sano for one branch for 2016. Funding came from the Rouge River Area of Concern Statewide Public Advisory Council to fill in data gaps in 2016.

Having always been science-minded, my understanding of why things happen is important. My studies started with a degree in physics. My path branched from the physical sciences by my increasing tropical fish hobby. Tropical fish lead to an interest in killifish. Collecting killifish in the U.S. exposed me to the variety of our native fishes. With increased knowledge of ecosystems, I began to learn about entire watersheds. Along this new path, my M.S. degree is in Natural Resources and Environment from the University of Michigan.

I have been collecting and raising fish since I was a youth. Native fish became even more important to me when I began to serve on the board of the North American Native Fishes Association. My career took me from drafting, to designing, to engineering, and toward retirement. Instead, I started a new career. I earned a B. A. degree in Environmental Studies Naturalist from the University of Michigan Dearborn, and have been surveying streams since before graduating.

Friends of the Rouge coordinates our volunteers. Through them, we will announce an event, where the curious can watch us survey, followed by a display of some of the fish caught, and our team answering questions.

To thank our larger supporters (>$50), we will send an 8x10 print of their choice of an actual survey fish.