We will be using a non-lethal research technique called
stable isotope analysis to help understand the diet and food web interactions of several species of sharks in coastal South Florida, information that will help fisheries and wildlife managers to better conserve and protect them!

Why sharks?
Sharks are ecologically and economically important animals whose presence helps keep ocean ecosystems in balance.They keep prey populations in check as well as remove the weak and diseased individuals, promoting balance in the oceans. They also add beauty and diversity to our oceans, which attracts divers from all around the world to popular diving sites. - Unfortunately, due to decades of overfishing on a global scale, many species of sharks have experienced rapid and severe population declines, with some declines surpassing 90% since the 1970’s. One in six known species of sharks, skates, rays, and chimeras are considered Threatened with extinction by the IUCN Red List.

Why feeding ecology?
An emerging trend in marine conservation is “ecosystem based fisheries management,” which means that managers would consider the diet and food web interactions of species of interest. An effective ecosystem-based fisheries management plan, which the U.S. government has expressed interest in instituting, requires detailed diet and food web interactions data. The traditional method of determining diet is called stomach content analysis, and it often consists of cutting open the stomach of animals to see what they’ve eaten. While direct and effective, this type of lethal sampling is inappropriate for threatened species. We will be using an alternative non-lethal method called “stable isotope analysis”.

The basic principles behind stable isotope analysis is that as a predator eats prey, atoms of that prey are incorporated into the predator’s tissues through the process of digestion, which means that on an atomic level, you really are what you eat. Different isotopes (same number of protons, different number of neutrons, so they’re the same element but have a different mass) of certain elements are preferentially retained by certain metabolic processes in a predictable, stepwise pattern. This means that we can measure the diet and habitat usage of animals by comparing their average isotopic ratio (heavy isotope to “normal” isotope) with that of their environment or potential prey.

Stable isotope analysis is based on the principle that “you are what you eat.” Atoms from digested prey are incorporated into the predator’s tissues, and by tracing naturally occurring radioactivity, we can measure a shark’s diet non-lethally. It’s explained in more detail in this review paper we wrote (LINK). There are a variety of feeding ecology research questions important for creating an ecosystem-based management plan that can be answered with stable isotope analysis. We will be using isotopic ratios of carbon (C13) and nitrogen (N15) from several non-lethally obtained shark tissue samples, including blood, fin, and muscle.

Isotopic ratios of nitrogen reveal the "trophic level," what step of the food chain an animal is on. Isotopic ratios of carbon reveal the "base resource pool," which can tell you if the animal is feeding primarily in a benthic (bottom) vs. pelagic (water column or in a offshore vs. onshore food chain. Taken together, they can provide a good overall look at a local food web. Additionally, a variety of analytical tools exist to help calculate the relative diet breadth of different species, revealing if the species is a generalist or specialist predator, as well as to what extent the species' diet overlaps with other species. All of this is critical information for making an effective conservation and management plan.

These research questions are reviewed in more detail (including examples) in this blog post (LINK).

We have already collected hundreds of biological samples from over a dozen species of sharks. It costs approximately $10 to process one tissue sample for carbon and nitrogen stable isotopes. 100% of funds raised for this project will be used to cover sample processing fees, and while $3,000 is the minimum we’d need to do this project properly, any additional funds raised would also be applied towards sample processing.

All samples have already been collected, and it costs $10 to analyze one sample. 100% of funds raised for this project will go towards sample analysis, and while $3,000 is the minimum we'd need to do the project, any additional funds over this goal will also be utilized for sample analysis.

Better understanding of shark ecology is critical to creating conservation plans that work. David's research will contribute to that goal.

Gina Maranto
Coordinator, Environmental Science and Policy, University of Miami
This is a wonderful project focusing on an important group of species. I, personally, am really impressed with David and his efforts to bring REAL science to the public eye. 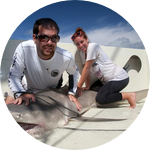 David Shiffman is a Ph.D. student at the University of Miami, where he studies the feeding ecology and conservation of sharks. David is an active online science communicator, using his twitter account, Facebook page, and blog to share information about sharks and ocean conservation.

About our lab
The RJ Dunlap Marine Conservation Program promotes conservation and scientific literacy by conducting cutting edge scientific research and providing innovative and meaningful outreach opportunities for students through exhilarating hands-on research and virtual learning experiences in marine biology. In 2013, we tagged and sampled over 300 sharks using our non-lethal catch and release sampling design. We also spoke in classrooms to over 500 students ranging from 1st grade to college, and took over 1,000 high school students out on the boat with us to learn about ocean conservation and help with our ongoing research. Learn more about us at SharkTagging.com and Facebook.com/SharkTagging .

I have loved sharks since I was a young kid in Pittsburgh, PA and am now living my childhood dream of studying them and working to protect endangered species. I am a faculty research associate at Arizona State University's Washington, DC Center, and I am the author of the new book Why Sharks Matter: A Deep Dive with the World's Most Misunderstood Predator. Follow me on twitter Facebook and instragram @WhySharksMatter

This project was briefly covered in the AAAS "Science Update" podcast. Here's a review paper we wrote explaining how stable isotope analysis can be used to answer questions important for shark conservation and management.

$50: 5 samples processed! You will receive an RJ Dunlap Marine Conservation Program (SharkTagging.com) logo sticker, a code good for 5% off the purchase of one item from our lab's online store ShopForSharks.com , and everything listed above.

$100: 10 samples processed: You will receive a code good for 10% off the purchase of one item from our lab's online store ShopForSharks.com, a personalized certificate (.PDF) commemorating your generous contribution to this research, and everything listed above.

$400: 40 samples processed! You will get the opportunity to join one of our shark tagging expeditions (a day trip in south Florida) as a citizen scientist (see here for more details) , and everything listed above.

$3,000: 300 samples processed! You will get the opportunity to name one of our satellite tagged sharks, and you can track it as it migrates using Google Earth (see here for more details), and everything listed above.