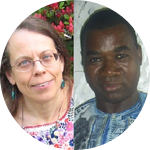 Y-DNA A00 and the Peoples of Cameroon: In Search of the Homeland

Which of Cameroon's peoples have members of haplogroup A00?

Go West, young man: in search of the A00 haplogroup among peoples of Western Cameroon

Research and conservation of threatened amphibians of Mt Nlonako, Cameroon

How Can We Improve Support for Bonobo Conservation Among the Congolese?

Does genetic compatibility play a role in our mate choice?

Our friends who've been with us since 2013 know what a long journey it's been. Now I'd like to bring you up to date on our project's progress.After the long and arduous process of winning approval ...

Dear friends and supporters, There's lots of happy news I'd like to share with you now, and with it, I hope you may forgive me for having neglected to share our progress for a while.After we receiv...

Your patience will be rewarded

54% Tonight we saw Matthew appearing on PBS, on the First Peoples TV series, about the evolution and migrations of humankind. Jacqueline Johnson, to whom we owe the discovery ...

Hi everyone, I thought you would like to know what we've been up to. Here we are, about to receive those lovely funds you have all helped us to raise. They are about to be transferred to a dedi...

Yes, dear and wonderful supporters, we did it -- in a tiny fraction of the time we thought we might need! You guys are truly amazing. I hope no one who comes along now will be confused when they ...

Hello, and a million thanks to our supporters! I never expected to have anything like the rapid progress we've made in our first 24 hours of fundraising. This is presenting us with a welcome que...

Backers Only
15
0
0
Aw, thanks so much to everyone for your very kind comments! Your support means the world to us. Bob, I'm honored by your praise, but I don't consider us "elite," just super-curious! We'd love to hear your ideas for our next fundraiser. There is still one more trip planned, and plenty of lab work. Do you think we should keep using Experiment? Should we split the amount we need into smaller chunks to make it easier to reach the goal? Please let us know of your ideas to make future fundraising a success!
Go West, young man: in search of the A00 haplogroup among peoples of Western Cameroon
View comment
Richard and Andreas, I hope the Lab Notes are now satisfying your hopes for more information!
Which of Cameroon's peoples have members of haplogroup A00?
View comment
Wishing you success!
How Can We Improve Support for Bonobo Conservation Among the Congolese?
View comment
Best wishes, Louis!
Research and conservation of threatened amphibians of Mt Nlonako, Cameroon
View comment