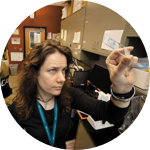 I grew up in the UK and started exploring caves when I was just 14. After studying in the US as an exchange student, I returned to get my PhD in Medical Microbiology from the University of Colorado. I thought I'd spend my entire career studying medical microbiology; however, when I was lucky enough to do a post-doc in the laboratory of Dr. Norman Pace, a famous scientist AND cave explorer, he convinced me that my caving skills would allowed me to carry out microbiology in some of the more remote cave environments on Earth. Since then I've become a Professor of Biology and Geosciences at the University of Akron, where my research lab studies microbial interactions and adaptations to cave environments, which has been funded by both the US National Science Foundation (NSF) and the US National Park Service. Since 2008 we have been investigating the role of Pseudogymnoascus destructans, the fungus that causes White-nose Syndrome, developing the first Federal guidelines for decontamination. The research of my lab group has been featured in Sports Illustrated, Forbes, National Geographic Explorer, Outside, Science News, The Scientist, Popular Mechanics, Wired, Geo and The Smithsonian magazines, on NPR and BBC Radio, on Animal Planet, the History Channel, the CBS Early Show, BBC TV and in the IMAX movie Journey into Amazing Caves. I remain an avid cave explorer, having explored caves on five continents, have served as a past director of the National Speleological Society (NSS), and am currently a director of the National Cave and Karst Research Institute. I'm also a Fellow of the National Speleological Society, a Kavli Fellow of the American Academy for the Advancement of Science, Chair of the Committee on the Status of Women in Microbiology for the American Society for Microbiology, and the recipient of an NSF CAREER Award.

Why are some bats naturally immune to White-nose Syndrome.

Warm spring, cold spring, high spring, low spring: where is all the water from?

You can take it with you! Building robust devices for 3D mapping caves.

Do spider silk biomaterials evolve as quickly as behaviors during adaptive radiations in Hawai'i?