Groups of three volunteers will each ski one of seven ~ 5-mile transects following riparian corridors spread across the Beartooth Plateau between Lady of the Lake Creek and Island Lake [FIG. 4]. They will record the track size, slide (body) width, and travel direction of any tracks recorded to identify individuals, assess their age class (adult or juvenile), and estimate their gender following these protocols developed in Europe to assess otter populations via snowtracking. This will result in demographic information as well as the data needed to test the hypothesis that this is a resident, breeding population. They will also collect otter scats for dietary analyses (DNA samples will also be preserved), record the locations of otter latrine sites (which may be useful for future camera trap work), and identify/record any fox, marten, or weasel tracks encountered for interaction assessment. Once they have reached the end of the transect, the volunteers will spread out ~ 1/4 mile on either side of the transect (outside of the riparian corridor) and return, identifying and recording any mesocarnivore tracks. These will provide a measure of mesocarnivore presence outside of the riparian corridors/away from otters so that we can compare them to those recorded within riparian corridors/in the presence of otters, and thus assess differences in habitat use affected by otter presence/absence. We will repeat these methods two days later to detect any tracks missed the first time. In addition to these citizen scientists, we will also work with filmmakers and journalists at this time to help share the project with the general public.

FIG. 4: Map of the study area, marking proposed snowtracking transects and evidence of river otters observed by YERC staff and others between 2008 and 2017. 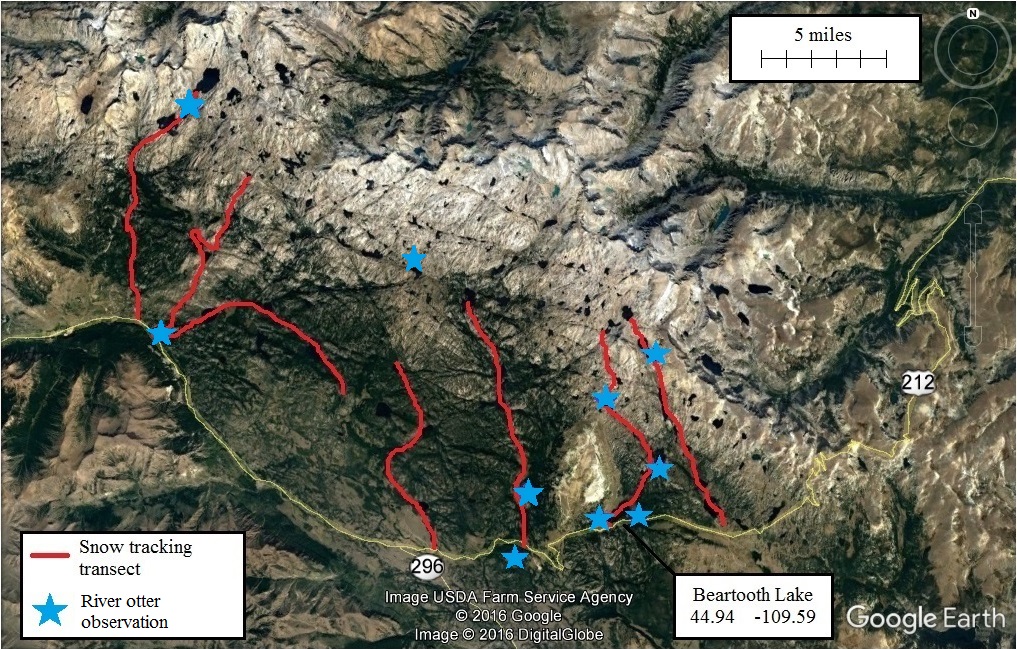 One challenge will be the quality of snow for tracking. Late spring is when there is peak snowpack on the Beartooth Plateau, yet the increasing temperature can make the surface hard and resistant to track imprinting. We will have to be somewhat flexible and try to collect data when the snow is soft (i.e., after a recent snowfall or a bout of cool, consistent temperatures). Fortunately, otters are relatively heavy, and the way they drag their bodies through the snow makes their tracks easy to find, so this should be less of a problem than it is for smaller animals.

Another challenge is the possibility that we do not find many tracks despite the effort. Yet since one goal is to assess the size and distribution of the population, this would still be valuable data indicating that it is small and not widely distributed.

And another challenge will be to recruit enough skilled volunteers able to collect data in this remote environment. That is why we are collaborating with groups like the Absaroka-Beartooth Wilderness Foundation and the Montana Backcountry Alliance, to find people who are (a) Passionate about the landscape, (b) Interested in citizen science, and (c)  Have the necessary backcountry skiing experience.

The greatest potential challenge, however, will be keeping up to 30 volunteers safe in this remote location. But by recruiting volunteers who are well experienced with skiing in backcountry terrain subject to weather, avalanche, and exposure hazards, by rigorous training and ironclad safety protocols (for all YERC projects, our priorities are (in order) (1) Crew Safety, (2) Animal/Resource Respect and Safety, and finally (3) Research Objectives), and by travelling in groups, each with a satellite emergency beacon, we are confident that we will safely and effectively accomplish our objectives.

We will assess population demographics and distribution based on the size of tracks recorded and the locations where they were observed following the protocols linked above.

We will assess the diet of the population by screening undigested content from scats and identifying the prey items using taxonomic keys.

We will assess the impact otters have on other mesocarivores through presence/absence assessments using the tracking data.

Finally, we will assess changes in habitat suitability using otter resource selection models developed in other studies like this, coupled with (1) historical environmental data from satellite imagery, weather stations, and climate models, and (2) future environmental projections based on climate models.

All of these results will be reported in an article submitted to a peer-review journal, reports submitted to permitting agencies (the Wyoming Game and Fish Department and the Shoshone National Forest), and the final video.