Based on stable isotope analyses conducted by a previous graduate student, I suspect that wattle-necked turtles could be eating Goby fishes. I plan on using environmental DNA to answer questions about two endangered species. In addition, my experiment demonstrates how this method can be applied to conservation efforts, involving not only fish, but also reptiles, amphibians, mammals and invertebrates.

In the state of Hawaii, a complex conservation situation exists for two endangered species, wattle-necked turtle and five species of Goby fishes.

No longer found in Asia, these softshell turtles have established populations in Kauai and to a lesser extent in Oahu; however its current situation raises questions about the effect on native fish species. Goby occupy a culturally important role to Hawaiians and have an amphidromous life cycle in which they spend part of their lives in the ocean and the rest in freshwater habitats.

In answering whether wattle-necked turtles are eating Gobies, I will use a recently developed molecular technique called eDNA. Environmental DNA (eDNA) works by detecting DNA from skin, hair or scales, mucous and feces that organisms leave behind in the environment.

An advantage of eDNA is that identification occurs by capturing DNA instead of the entire organism. In cases where the organism is rare and capture is likely to cause harm, eDNA has trememdous advantages.

In fact, an annual report from Trends in Ecology and Evolution listed eDNA detection of aquatic species as one of the 15 global conservation horizons for 2013. In the future, I expect eDNA to become another standard research tool, like mark-recapture methods.

Next I will begin controlled experiments to help develop the protocol I plan to use in the field. When turtles are fed a controlled diet, I will develop a procedure that allows me to detect goldfish DNA in the fecal matter of turtles fed goldfish. The control group will be turtles fed only turtle chow.

In addition, water samples taken from buckets containing turtles will be processed using eDNA techniques to detect turtle DNA. Tanks containing goldfish will also be sampled to detect the presence of goldfish DNA.

As a graduate student, laboratory consumables represent a genuine expense. Items such as molecular grade water, reagents for polymerase chain reaction (PCR), forward and reverse primers, and disposable plastic tubes are items I purchase with my credit card though Fischer Scientific. For a molecular biologist, these supplies are as essential as textbooks and pencils. Based on the budget portion of my research proposal, I estimated the cost of these consumables at $2,500. 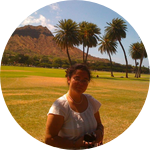 Born in Seoul, Korea, I grew up in a military family and spent six years with my dad stationed at Fort Shafter on Oahu. As an adult, I live in Northern California. At home, I have a husband, three teenagers, and a English Springer Spaniel. When left to my own devices, I binge-watch shows like Good Eats and No Reservations and read any well-narrated story with a scientific slant, such as The Martian.

My current research interests began two years ago. Tag Engstrom needed an ecology student who could apply molecular techniques to an ecological study. I met Tag last spring when I needed turtle blood for a research project. As we talked, he described his current project involving endangered wattle-necked turtle suspected of eating endangered Goby fishes native to Hawaii. By the end this discussion, I was hooked. Presented with a conservational mystery requiring the use of cellular molecular biology to solve, I decided to apply for the graduate program in biology at Chico State.

4 Lab Notes Posted
What is environmental DNA?
Chico News Feature: The proof’s in the poop
Where I work