The American chestnut (Castanea dentata) was once an important member of the Appalachian ecosystem but was largely destroyed by two introduced plant pathogens. Through the use of techniques previously innovated by researchers at SUNY-ESF, a new form of biotechnology called RNA interference (RNAi) could potentially be pursued to confer resistance to these pathogens by silencing the genes they use to attack American chestnut.

RNA interference (RNAi) technologies work by interrupting the expression of genes at the RNA level. An RNAi technique called Host Induced Gene Silencing (HIGS) has previously been shown in other plant species to be able to turn off pathogen genes that are used to attack their plant hosts. Although genetically engineered American chestnut has been previously developed, the use of these RNAi technologies have not yet been explored in these trees. Using the genetic engineering techniques previously developed for American chestnut, it should be possible to implement this RNAi HIGS technology to target the virulence genes of the tree's two main pathogens: chestnut blight fungus and Phytophthora cinnamomi.

This technology has not yet been used for disease resistance in any forest tree species. If our project is successful in employing this approach to disease resistance in American chestnut, it may present a viable option for resistance to diseases in other tree species. It is difficult to find useful resistance genes for diseases in plants; one of the exciting aspects of this RNAi HIGS technology is that it appears to be widely applicable to a variety of pests and diseases. There are countless examples of forest tree species threatened by introduced pest and pathogen species globally. If the deployment of this technology against multiple pathogens in American chestnut is successful, then the future prospects of genetically engineered resistance in other forest species will be enhanced.

Transgenic American chestnut embryos harboring RNAi constructs will be generated using Agrobacterium-mediated transformation protocols. Validated transgenic embryos will then be developed into tissue culture plants via organogenesis and evaluated for molecular characteristics such as gene expression levels. Tissue culture plants will eventually be rooted in peat pellets and slowly acclimated to normal growing conditions in high-humidity growth chambers and then potted and moved into the greenhouse. Greenhouse plants will be assessed for disease resistance via inoculation with chestnut blight fungus and Phytophthora cinnamomi cultures. If resistant lines are identified, (uninoculated) clones of those lines will be moved to the field for long-term assessment.

This project is at the beginning stages of development. The experiment has been designed for the creation of transgenic American chestnut lines carrying hairpin RNA (hpRNA) cassettes. When transcribed, the hpRNAs will target virulence genes associated with the infection processes of chestnut blight fungus and Phytophthora cinnamomi. The funds sought will support the purchase of materials used in the development of 3-5 new genetic constructs as well as the materials needed for the genetic transformation and tissue culture process of American chestnut. Results from the experiments and research being funded will be published in open access journals which assess fees in order to publish without paywalls.

Erik Carlson is my graduate student who has already proven his research abilities with chestnut in his MS program where he studied a wound/pathogen inducible promoter. He is now pursing this novel RNAi approach to enhance resistance in chestnut as part of his Ph.D. program. This will not only help chestnut restoration, but may be applied to other restoration trees devastated by invasive pathogens. I fully endorse this approach. 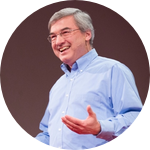 William A. Powell
Professor and Director of the NYS American Chestnut Research and Restoration Program
SUNY College of Environmental Science and Forestry

The first steps are to design and synthesize target sequences for Host Induced Gene Silencing. Next, the newly developed silencing constructs will be transformed into American chestnut embryos, which will then be regenerated through a tissue culture process. Regenerated transgenic lines will be screened for gene insertions and expression. Validated transgenic lines will be rooted and grown into potted plants. Potted plants will be tested with infection bioassays to assess levels of resistance. 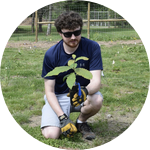 Our chestnut team at SUNY-ESF under the direction of Dr. William Powell is made up of undergrad and graduate students, professional researchers, and field and orchard staff. We are on the cutting edge of forest biotechnology research and seek to restore devastated tree species through the utilization of genetic engineering. The American chestnut is one of the nation's iconic tree species and we hope its restoration could be the first of many trees brought back through biotech interventions.

I am a tree scientist with a focus on molecular biology techniques and biotechnology. I have worked with the American Chestnut Research and Restoration Project at SUNY-ESF for five years and before that I worked in transgenic poplar research. I am a true believer in the potential positive impacts of biotechnology in the realm of species conservation and I see the American chestnut as one of the greatest examples. I would like to see this tree restored to the forest and to our towns and cities so we can once again revel in its beauty and its bounty. The consequences of its loss in the previous century were devastating not only to the Appalachian ecosystem but to the culture of Appalachia itself. My hope is that we can once again enjoy the shade of massive American chestnut trees in summer and enjoy delicious chestnuts during the winter holidays.