The iconic Australian lizards called sleepy lizards, shinglebacks or bobtails, are famous for being monogamous. In spring these lizards pair up, usually with the same mate from last season. They are threatened by an emerging disease “bobtail flu”. If brought into a center most lizards survive, but in the wild they could die. We recently worked out this is a novel virus and want to develop a test to see if we are dealing with an emerging disease. Making an antibody is the first step.

The iconic Australian lizards variously called sleepy lizards, shinglebacks, or bobtails, are suffering from a disease called "bobtail flu". Animals with flu like symptoms have been taken into wildlife centres in Perth since the mid 1990's. Now about 200 per year are brought in. Our team has identified the virus and now wants to take this research further to ask questions like: what is the geographic range of this disease? What other reptiles get it? Has it come from the eastern states of Australia or is it an emerging virus that might infect this and other reptiles across Australia?

Although we know that this is a novel virus, previously unknown to science, we don't know if the bobtail flu is an emerging disease that might be about to sweep across this and other species of reptiles in Australia. Potentially the virus could also be taken outside Australia in the illegal pet trade. We have the opportunity to track this potentially emerging wildlife pathogen. We know so little about pathogens in Australia's lizards and snakes that our project could be the tip of the iceberg and promote increased study in these unique animals.

Longer term we want to track the progress of this disease and work out if other species of lizards and snakes have been exposed to it. The first step in this is to get an antibody developed. We would do this commercially and then get started working on a test we can apply to other wild caught lizards and snakes to see if they have the disease or are yet to be exposed. After this we want to look at the genetics of the immunity in the lizards. We have some genetic markers (MHC) which we can use to track resistance across geographic areas. Also we can try and work out what other immune genes might be being used including Interferon.

The first step in devising a test for this flu is getting the antibody made commercially, which is our minimum funding target. This will provide a really good head start when applying for large grant funding. We need some preliminary data for the funding bodies (such as the Australian Research Council - ARC). We aim to put this project in for the next ARC round which is due in early 2017.

If we raise more money we would use an additional $12,000 for consumable funds and labor costs for making an ELISA or Luminex Assay. Again this would provide a significant boost when trying to secure funding for the significant aims of the project. We could develop these tests much more rapidly with this additional funding as it could be outsourced.

With $3,000 more dollars we would do a sampling trip from Perth to Adelaide to sample lizards and determine the spread of the disease. Sample collection could be done before we have the antibody test so we are ready to go.

Our understanding of reptilian diseases is limited. This collaboration presents a great opportunity to track the recently identified bobtail lizard flu. The complementary expertise of the research team provides a strong foundation for this novel research. 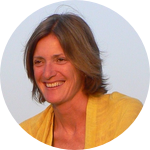 Sarah Kim Pearson
PhD Candidate
Flinders University of South Australia
This is an extremely important project for several reasons. The sleepy lizard is an iconic Australian reptile and unique in that it is monogamous. It is critical for the longevity of the species that this project goes ahead so that we have a better understanding of this novel virus and the effects it has on the species. With help from the public these researchers will have the best chance of developing a test for this flu. 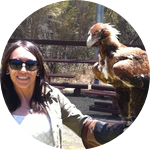 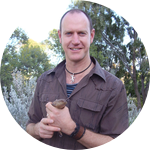 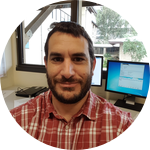 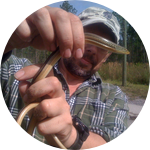 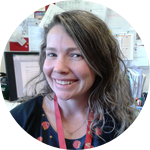 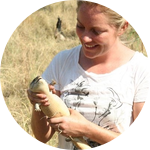 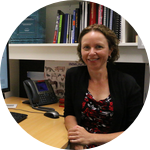 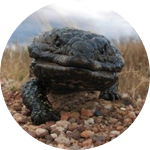 We have assembled a team with complementary expertise from wildlife biologists, molecular ecologists, veterinarians, veterinary virologists and immunologists. Many of us have worked together before but not in this lineup. Most of our team plans to meet in November this year to work out details of the major funding application we are planning to submit in early 2017. We are all excited to work together on this significant project.

My lifelong fascination with lizards started when I saw bearded dragons sunning themselves in my backyard as a kid. I now work on lizard sociality including aspects of their genetics, their parasites and disease. Mostly I look at immune genes and how that affects social structure in Australian lizards such as gidgee skinks, sleepy lizards (bobtails!) and the endangered pygmy bluetongue lizards.

I am a veterinary virologist who has been involved in small animal clinical practice, agriculture and now academia over the course of my career. My current research focus includes viral diseases of reptiles and bats in Australia. In particular, determining the cause of the 'bobtail flu' in order to aid management of this debilitating condition.

I am a wildlife biologist whose main interests lie in behaviour, conservation, and ecophysiology. I worked in Europe, Africa and America before locating to Australia.
My research has not been limited to particular taxa and I have worked on invertebrates through to large mammals. Having said that, I have a special affection for lizards and other reptiles I am also interested in animals in urban environments: some species very well in urban areas, others do not - finding out why can help us make appropriate management decisions.

My research revolves around understanding how animal behaviour influences the transmission of diseases. In our human societies, the people who we spend the most time with (both at home or in the workplace) are likely to also be the people we blame when we catch a cold. The same applies to animals, except they have a myriad of different patterns of contact and diseases! I use social network models to map out 'who interacts with whom', and understand how individual behaviour shapes the transmission of diseases across populations. These questions help us understand more about how diseases circulate in populations, which is becoming more important as wildlife populations are increasingly threatened by diseases.

I have been a veterinarian for twelve years, with a focus on wildlife health and conservation for the past eight years including a residency at the Auckland Zoo, and a PhD on health and disease challenges for wild Red-crowned Parakeets in New Zealand. Although I'm interested in all wildlife, I find reptile health and disease issues particularly interesting as this group is comparatively understudied in the wild. Given the large amount of bobtails going through rehabilitation with this disease, I'm particularly interested in some of the practical aspects of the 'bobtail flu' including which samples are best to diagnose/detect it in an individual, is there a need to treat individuals in rehabilitation, and how do recovered individuals fare in the wild?

I am a comparative immunologist with interests in wildlife and host responses to infectious diseases. My recent work has focused on innate antiviral immunity in bats which are reservoir hosts for a variety of viruses that are highly pathogenic in other species but cause no disease in bats.

I work on the behavioural and social ecology of Australian lizards, focussing on skinks of the Egernia group. My work is broken up into 3 main areas: 1) Conservation of endangered lizards. The pygmy bluetongue lizard has recently been rediscovered after it was considered extinct. Slater's skink was once widespread in the MacDonnell ranges region around Alice Springs, but now is under threat as buffle grass spreads through its habitat. For both species we are exploring behaviour and ecology to recommend management for conservation. 2) Lizard social behaviour. Australian skinks show a remarkable range of social behaviours from long-term pair fidelity in sleepy lizards to family group living in Stoke's skinks. We are exploring the nature and implications of these behaviours and developing social network descriptors of their behaviours. 3) Parasite-host interactions. Social networks are the pathways for parasite transmission. Exotic pathogens are a likely future threat to endemic species. Our research investigates the dynamics of parasite transmission of endemic parasites around lizard populations. If we know more about these systems we will be better equipped to manage future threats from exotic pathogens

This bobtail photo was taken by Carol Jackson (bobtail rehabilitator) at the Kanyana Wildlife Centre, and is typical of how the animals look when brought in for treatment. Lizards typically spend about 6 weeks in treatment before being released.

We are very grateful to Kanyana Wildlife Centre for helping us screen bobtails entering rehabilitation, so that we could find this novel virus. Wildlife centres like this can help keep an eye on what is happening 'out there', and detect new diseases such as the bobtail flu. Thanks Kanyana! 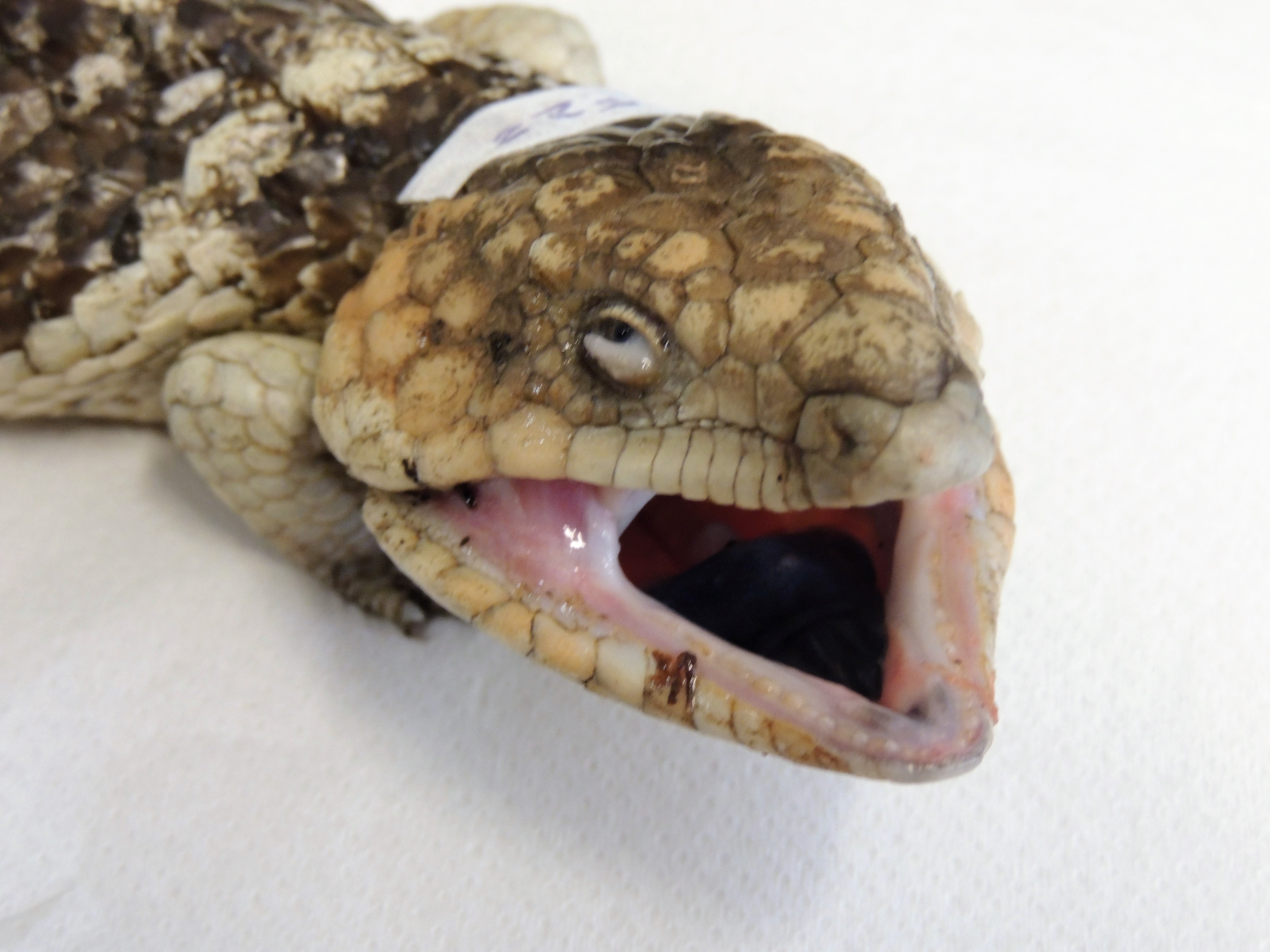