Study Sites and Animals. We will conduct this study at the Southwestern Research Station (SWRS) in the Chiricahua Mts. (Cochise County; alt. 1650-1720m), SE Arizona. This site was selected because it offers a variety of hummingbirds that fill different ecological roles. We will study an opportunisitic forager, the black-chinned hummingbird (Archilocus alexandri; 3.0 g), a trap-liner, the Rivoli's (Eugenes fulgens; 7.5g), and the territorial blue-throated hummingbird, (Lampornis clemenciae; 8.0g). 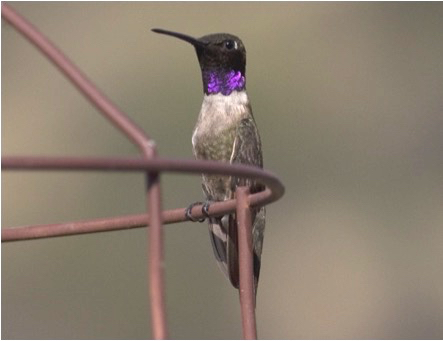 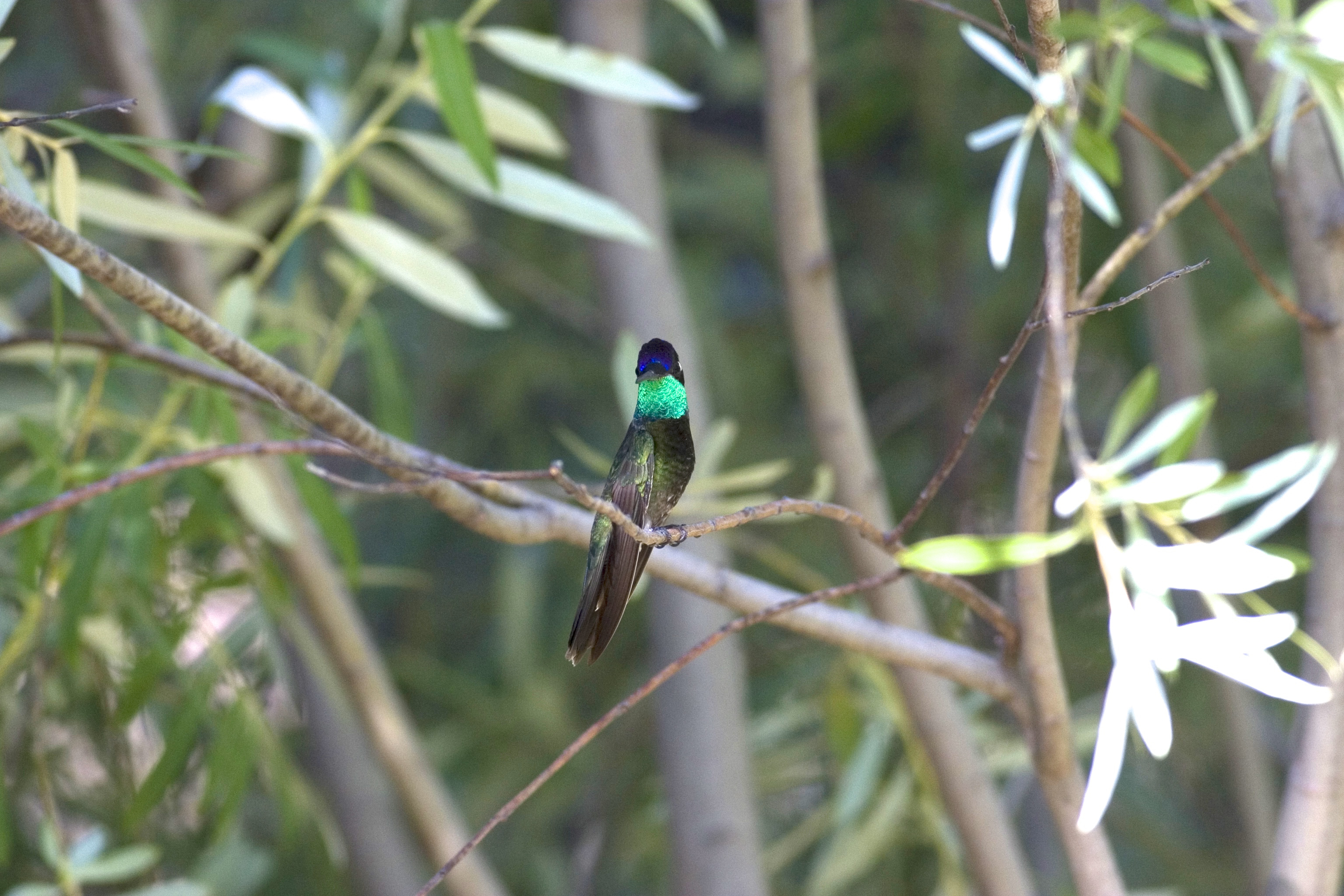 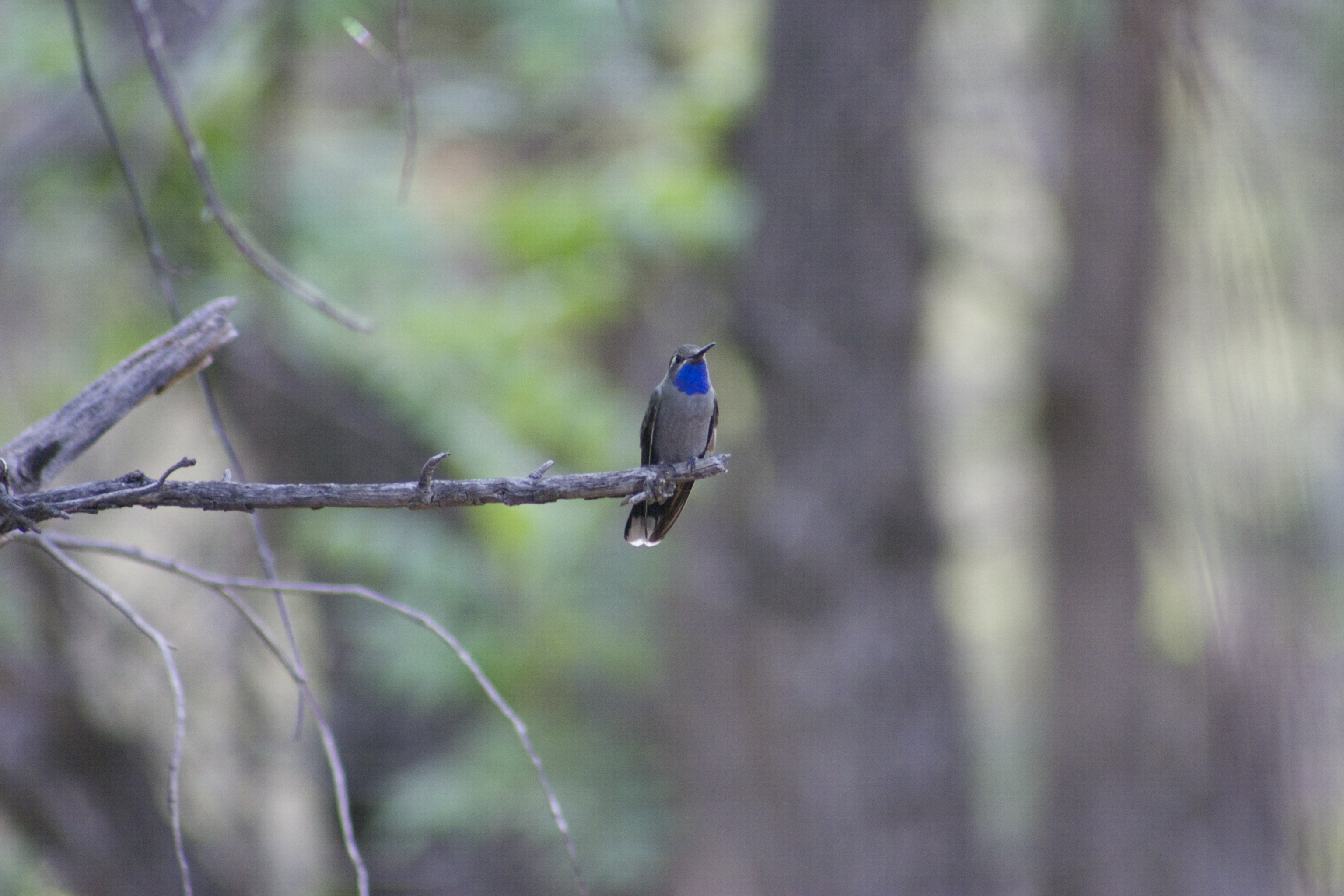 Hovering Metabolic Rate and Respiratory Evaporation.  Hovering metabolic rate (HMR) and REWL will be measured using an open-flow, negative-pressure respirometry system. Expired respiratory gas will be collected from hummingbirds hover-feeding in a mask attached to a feeder. The expired gas will be pulled through a humidity sensor and oxygen analyzer (Sable Systems Field Metabolic System; FMS) by a mass-flow system (Sable Systems MFS-2) at 2 L/min. Data acquisition and analysis will be done using Warthog software (warthog.ucr.edu).  Gas measurements will be used to calculate O2 consumption (VO2; mL/min).  Because feeding bouts are too short to achieve steady-state VO2, HMR will be calculated by integration of the VO2 curve to get mL O2 consumed, then dividing by total feeding time (min).  Feeding time will be calculated from video recordings (Canon HV20 digital camcorder) of feeding bouts. Energy equivalent of VO2 will be calculated assuming 1 mL O2 = 20.1 J.  REWL (mg/min) will be recorded, and total mg water evaporated determined in the same manner as described above for O2.  Evaporated water will be converted to units of energy using the latent heat of vaporization (1 mg H2O = 2.447 J).  Total feeding time will be calculated as described above. 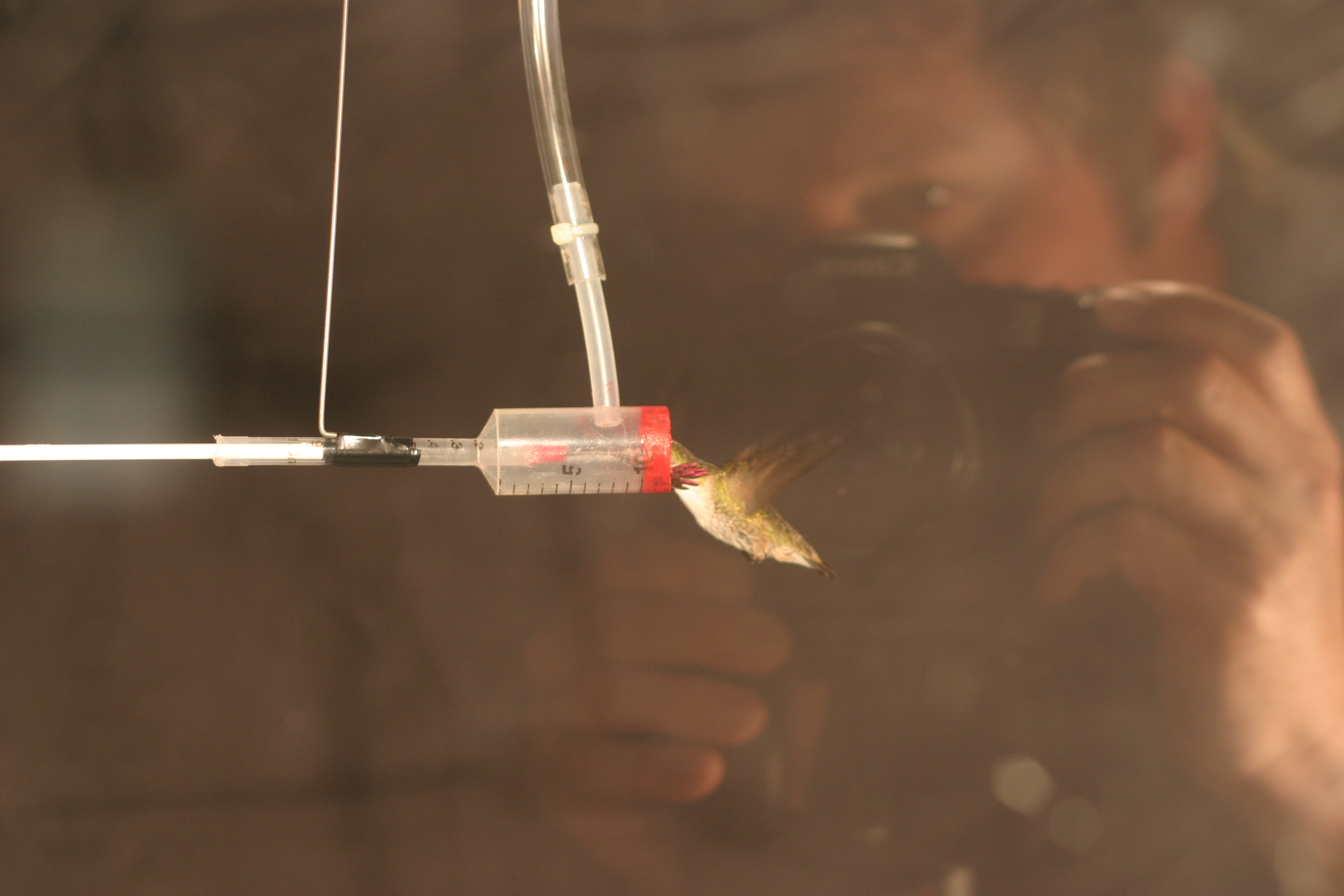 Total Evaporation.  TEWL during hovering will be measured using open-flow respirometry similar to that described above for REWL. Instead of a mask, a large funnel (diameter = 25 cm, depth = 20 cm) will be placed directly below the feeding hummingbird.  Air will be pulled from the bottom of the funnel at 5 L/min by GAST (DOA-P704-AA) pump with flowrate controlled by an Alicat (MC-10SLPM) mass-flow controller. Feeding time and data analysis are as described above. CEWL will be calculated as CEWL = TEWL – REWL.

Daytime Mass Measurements. Hummingbird mass will be measured by suspending a perch from an Ohaus Scout Pro (model SP402) balance, and positioning the perch in front of a feeder. Mass will then be measured to the nearest 0.01 g each time a hummingbird lands to feed. Bird mass will be recorded continuously during a feeding bout, which allows me to measure both feeding rate and nectar-meal size. Mass measurements will be digitally recorded using a MacBook Pro computer. Feeders will be filled with a 20% sucrose solution similar to the sugar concentration of natural hummingbird flower nectars. To convert feeding rate from mass to volume, we will weigh a known volume of the specific sucrose solutions. At each weighing location, a Day 6 Plotwatcher Game Surveillance System will be set to record every 1.0 second. Collected images of only the hummingbirds will be filtered and isolated using MotionMeerkat software. 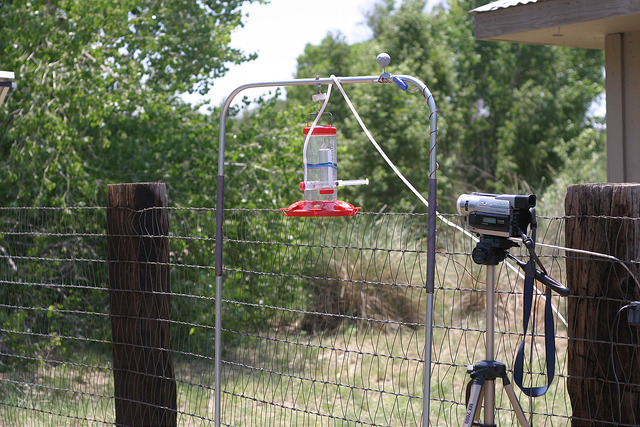 Feeder-support structure that will be used during mass measurements.

The biggest challenge that we face in this experiment is being able to collect all of the water evaporated by the bird while it is hovering. It is possible that the downward air movement from the wings of the hummingbirds will cause sufficient turbulence to drive some water vapor out of the funnel. We are currently working with different funnel designs to avoid this problem.

We will analyze our data using Warthog LapHelp and LabAnalyst software (warthog.ucr.edu). This can be used to calculate O2 consumption and the amount of water evaporative. From these data, we will be able to calculated cutaneous evaporative water loss as CEWL = TEWL - REWL. For mass measurements we will use MotionMeetkar software to isolate images of  hummingbirds collected by our Plotwatcher cameras that can be matched to mass recordings to give us species and gender for each datapoint. When measuring mass throughout the daytime activity, a MacBook Pro will be connected to the Ohaus Scout Pro balance, and LoggerPro software will digitally record the data.