Lions and people live a tenuous coexistence. When lions kill livestock, villagers retaliate with poison, which indiscriminately removes lions and other wildlife. Through Pride in Our Prides, communities have named local lions and followed their daily habits to learn their individual stories. Through satellite tracking, we also provide early-warnings via text when lions approach the village. So far, this system has successfully protected livestock and lions while halting the use of poison.

In 2013, a small community in Northern Botswana started poisoning lions. The poisoning was indiscriminate not only killing over 60% of the local lion population, but had cascading affects to spotted hyenas, jackals, and vultures. We wanted to address the use of poison by engaging with communities in lion research and monitoring. We know lions are individuals, with certain individuals more likely to cause conflicts than others. By knowing lions as individuals we believe that people will be more tolerant. Therefore, Pride in Our Prides identified all of the local lions and had community members give them names with local significance. Further, we have hired locals to help monitor these lions and share their stories with members of the community. We plan to expand our study to new lions.

Since poison is easy to access for local people and its impacts can be devastating to local wildlife, we decided to combat this issue with education. This is particularly significant in our region of Northern Botswana where people's livelihoods are under constant threat by predators and elephants. By providing information to help people learn about the local lions and real-time warnings when lions are approaching the village, we are helping people coexist with lions in new ways. Our innovative approach to human-lion conflict is a new model that can be applied globally, in areas facing similar challenges. As our program grows, we will continue training local assistants to provide employment, and community development for the future.

Our specific goal for this project is to expand our study area by collaring new lions at the edge of our current area. For complete regional coverage, it is imperative that we collar a lion representing each local pride. In September, as the rains subside and the rivers recede, we will begin our collaring effort. We will dart our target lion, fit the satellite tracking collar and designate them with a locally determined name. The collar will collect 7 locations per day and send a warning via text when the lion crosses the "geofence" towards the village in real-time. We will inform villagers of our new lion's habits. This collar will last approximately 2 years and automatically drop-off at the conclusion of the study. As the project expands we hope to track more lions across the landscape.

We have a multifaceted approach to lion conservation that relies on providing real-time information to communities about lion movements. Through this proactive initiative we can prevent livestock losses and retaliation. Since the major poisoning event in 2013, poison use has not been observed and lions seem to be recovering.

Until recently, we had estimated 34 lions in our area. Five of these lions have already been fitted with collars and given noble names by the community, but we have discovered several new lions in our study area, of which we know little about. To learn more about these lions and their movement patterns, we seek funds for at least one new satellite tracking collar and support for our veterinarian to travel to our remote field station.

Conservation of large carnivore populations depends on co-existence with local peoples, and figuring out ways to do so successfully is an on-going challenge. Innovative approaches such as "Pride in our Prides" endow local people with knowledge, understanding, and an appreciation of lions that allows for continued traditional livelihoods and a major reduction of wildlife conflict. This project will be a shining example of how thoughtful science and community involvement can help avoid a major wildlife defeat. 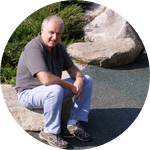 Todd Fuller
Professor
University of Massachusetts Amherst
The use of poison is prevalent throughout the world and is a major threat to carnivore and wildlife populations. The focus of the CLAWS conservancy is to engage the local community and educate about the problems of using poison, but is also using innovative techniques to solve the problems they are having with carnivores. Andrew Stein has an excellent track record in conducting research, and his work with the CLAWS conservancy will be instrumental in helping rural communities conserve wildlife. 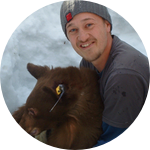 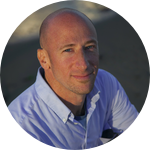 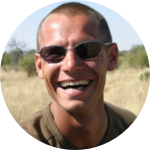 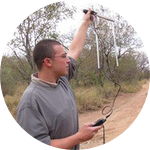 I am lucky to have the opportunity to pursue my three passions in life- wildlife conservation, travel and helping people. When I was a child growing up in Massachusetts I never expected to travel much or work to conserve large animals in the wild. That is what people on TV were able to do. It was when I visited Africa for the first time during a study abroad trip I realized that I could be a field biologist and help people coexist with wildlife. From then it was my goal to design projects in rural communities to help people and protect wildlife species. After my first leopard project began in 2001, I was hooked and have worked on lions, leopards, cheetahs, hyenas and wild dogs throughout East and southern Africa. As new projects develop, it is exciting to see what will present itself next.

Pride in Our Prides represents my first initiative structured exactly as I have intended. As wildlife species become more threatened and protected areas more isolated, we need to engage with communities to foster local investment in natural resources and heritage. Lions represent a big challenge because they can be devastating for subsistence livestock owners and dangerous for people. It is this threat that causes people to act out and kill LIONS as a problem species. However, until fairly recently, people have coexisted with lions. With expanding human populations, habitat fragmentation and advanced weaponry including poison people have reduced lion range by over 80%.

I wanted to do something and I kept coming back to this quote-“In the end, we will protect only what we love. We will love only what we understand. We will understand only what we are taught” (Baba Dioum). I believe that it is human nature to care when you know the backstories of individuals and not just paint with broad strokes. I have seen examples of livestock farmers learning to tolerate animals, even conflict animals, when they knew their stories. Our project tests this hypothesis to promote coexistence.

I grew up with a strong passion for wildlife, fascinated by watching documentaries and by getting involved from a very early age. Living in Berlin, Germany, the latter was not always possible, but since I can remember my dad used to bring injured or orphaned wild animals home. They would be cared for and eventually released. In my early twenties I moved on to study wildlife management in Tanzania where I got involved with elephant research and human-wildlife conflict in general. Since then my life has revolved around Africa, its wildlife, people, and the tensions ensuing from coexistence. I believe that coexistence is possible, because I have seen it happen. Working with livestock farmers in Namibia for many years, and the wild predators on their lands, showed me that simple conflict solutions can work. These become even more effective when we couple them with solid science. A decade in the field and the “inevitable” PhD confirmed that people will go out of their ways to tolerate dangerous and damage-causing species as long as we (as conservationists) involve them in our work. Sharing research information is paramount! Hence, joining Pride in Our Prides is my next step forward. We develop pragmatic tools (traditional and modern) to address human-lion conflict while basing our work on scientific principles and monitoring. We involve communities directly, live among them and try to sync all the available tools to improve coexistence. We utilize strategies that have proven successful, like proper herding and lion-proof livestock enclosures. We also explore new ones such as real-time lion alerts from GPS tracking collars. I am excited to make this the next step of my career.

Growing up I was always fascinated with African wildlife, unable to get enough of TV specials on the Serengeti or Nat Geo articles on lions and other large carnivores. I knew I wanted to work with wildlife but I had no idea what my career path would look like or what options were actually possible. During my junior year at Connecticut College, I attended a wildlife conservation study abroad program in Tanzania which solidified my love of the African bush. Following this program, I did an internship on a reserve in South Africa where I tracked and monitored collared lions. Back on campus and inspired by my time in Africa, I wrote a senior thesis investigating the ecological and social implications of the national park conservation model in east and southern Africa. Upon earning a Bachelor’s degree in Environmental Studies in 2011, I started graduate school at the University of Massachusetts Amherst in the Department of Environmental Conservation and received a Master’s degree in 2014 for my work studying the distribution of coyote, red fox and gray fox in Massachusetts. After developing the concept of Pride in Our Prides with Andrew, I established and managed the field components of the project in conjunction with my PhD research and a Fulbright Research Grant to Botswana in 2014. Pride in Our Prides has grown and evolved since then and I’m delighted to be following my childhood dreams and contributing to the conservation of a vulnerable and iconic species.

15 Lab Notes Posted
Thank you Experiment Supporters!
We have our collar! Thank you!
Pride in Our Prides Lion-Proof Kraal Builders