We are using a special mouse model that enables us to study the anti-myeloma effects of a synthetic DNA-binding drug that blocks the adaptive hypoxic response of human myeloma cells engrafted in the mouse bone marrow. We have genetically modified our human myeloma cell lines to express the luciferase gene (the gene that is responsible for making fire-flies glow), and this will allow us to study the drug-mediated effects on tumor growth and survival in the mouse bone marrow over time. We achieve this using special imaging and X-ray technology that can "measure" the light produced by these cells in the bone marrow. We are going to study not only the effects of the drug on tumor survival but also whether or not the drugs have an effect on other symptoms of multiple myeloma, like the formation of bone lesions and recruitment to other areas of the skeleton. In the composite picture below, human luciferase expressing myeloma tumors (the colored spots) are shown to have engrafted in various parts of the skeleton of 3 different mice. 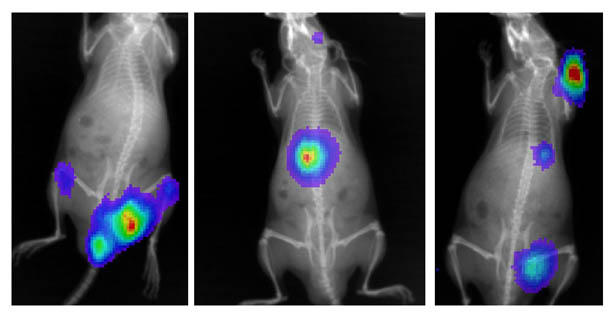 Our studies will use a synthetic, DNA binding drug that is designed to inhibit the ability of an important hypoxia-inducible transcription factor (HIF) from upregulating the expression of certain genes. HIF is actually made up of two subunits, an alpha unit and a beta unit. The alpha unit is very sensitive to oxygen levels, and under conditions where oxygen levels are "normal" in the cell, a complex series of events target and degrade this protein so that it cannot bind to the beta subunit (see part A in figure below). However, when oxygen levels are "low", the regulation of the alpha subunit is inhibited, and the two (alpha and beta) subunits can bind together and activate gene expression by forming a complex with specific DNA sequences. Our experimental molecule (called HIF-PA) can bind to the DNA sequences recognized by HIF and potentially inhibit HIF/DNA binding which will lead to blocking the expression of the HIF-responsive genes (see part B in figure below). 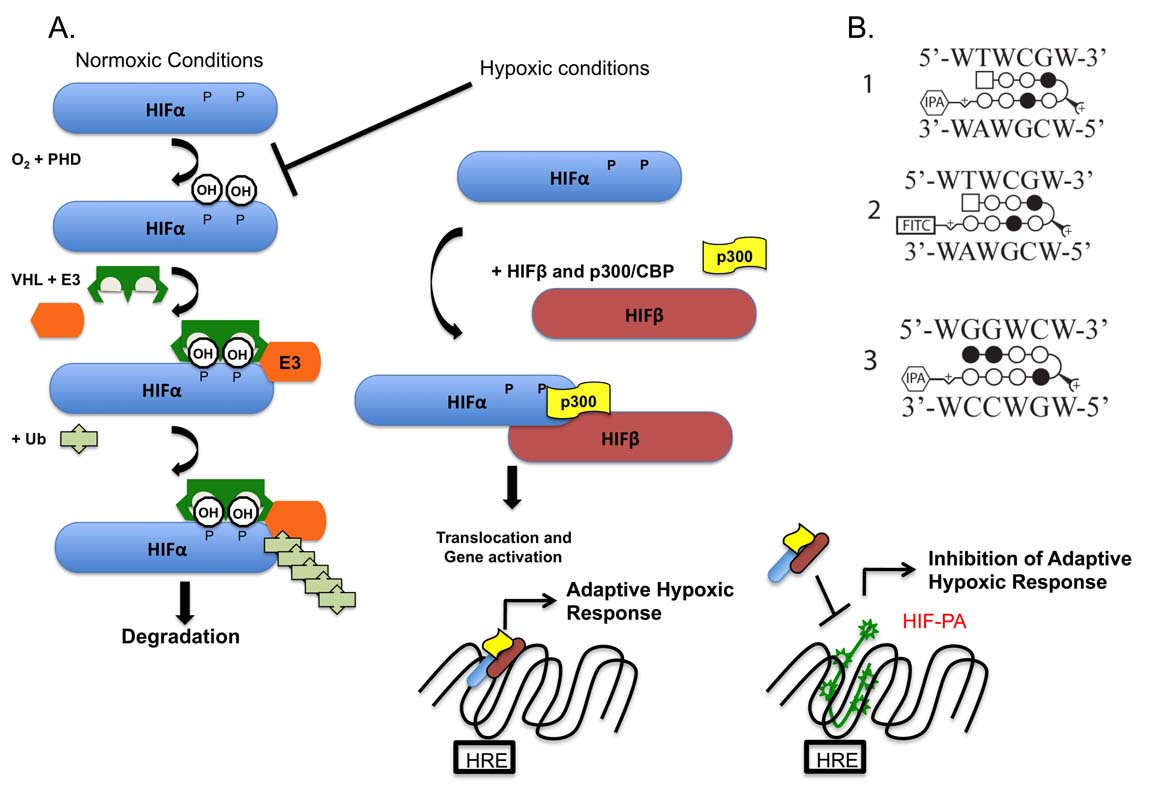 One reason why studying multiple myeloma is so difficult is because the bone marrow environment, where the tumors are found, is such a critical component of this disease and can not easily be reconstructed in test tubes in the laboratory. To address this, we have developed an experimental model that allows us to study aspects of human myeloma tumor cells that have engrafted in the bone marrow of immmunocompromised mice. This allows us to study the effects of drugs that are designed to target very specific aspects of myeloma biology and measure the effectiveness of these treatments on the pathology and progression of the disease over time. My laboratory has the specialized equipment that will allow us to study multiple myeloma using non-invasive and real-time imaging of our mouse xenograft model. The major strength of these models is that they represent a much closer approximation of the clinical manifestation of this incurable disease.

We have transfected our human myeloma cell lines with a luciferase gene (the gene that makes fire-flies glow). These bioluminescent cells produce light that can be measured within the bone marrow using a very sensitive imaging/X-ray system. The change in intensity of bioluminescence can be measured over time and serves as a way for us to monitor the changes in tumor growth in response to different treatments or therapeutic strategies. In the figure below, we present the results of an experiment were we measured the changes in the average radiance (i.e. light produced by tumors) in mice that were treated with two different drugs (the bars or arrows along the X-axis indicate the days the drugs were administered to the mice) or control injections. As can be seen in this figure, the drugs had a significant inhibitory effect on the tumor growth (the asterisks indicate statistically significant differences from control values). These experiments are very promising as we are now working to carefully study the underlying molecular and cellular responses of the tumor cells to these drugs. 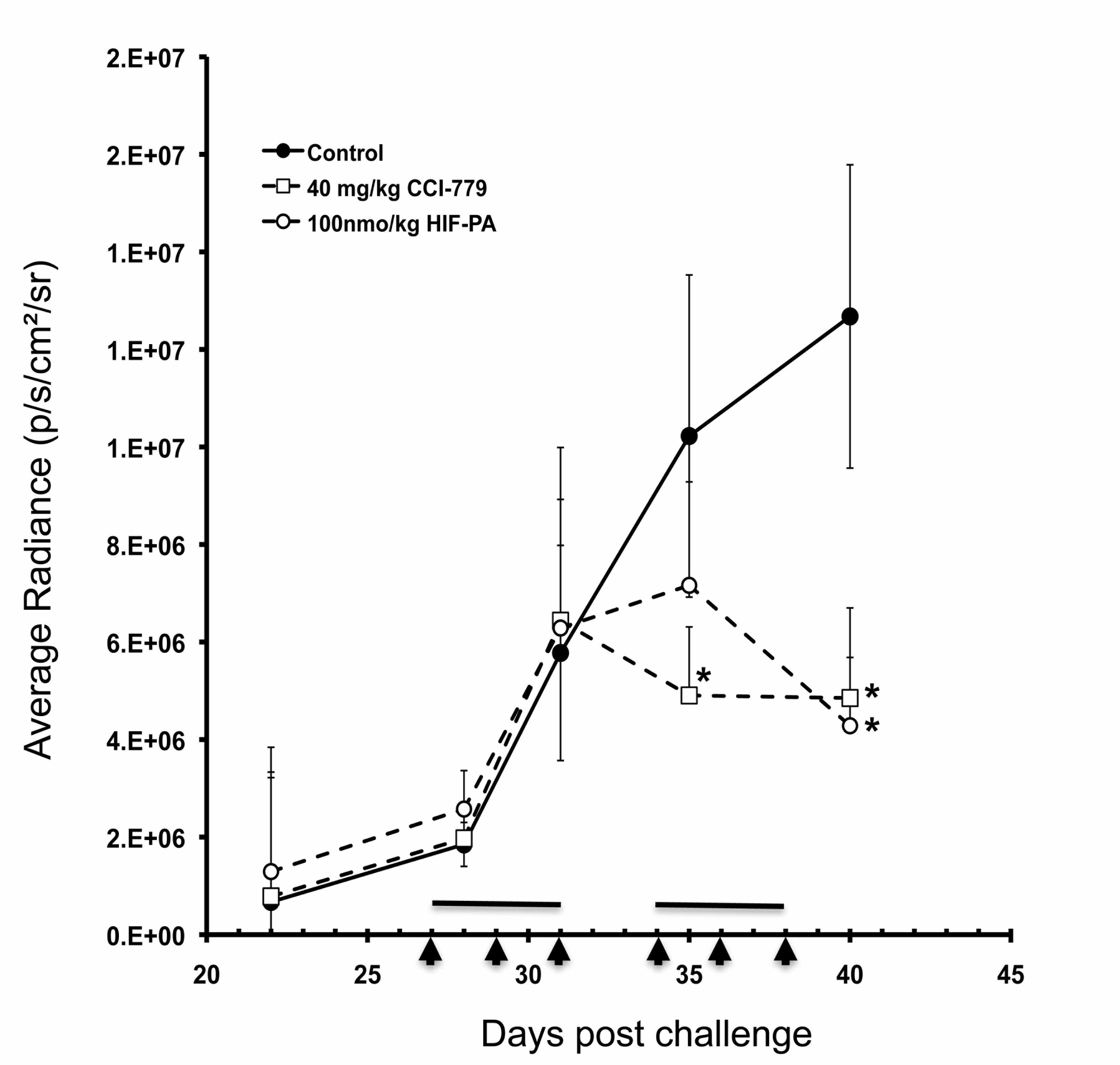