The presence of Flammulated Owls indicates ecosystem health in the Rocky Mountains. In the fall, "flams" leave their northern breeding grounds to over-winter in Central America, relying on islands of pine forest to sustain them along the way. Researchers still don't know exactly where these stopover habitats are. GPS devices attached to individual flams show precise locations of migratory birds during their fall and spring migration.

A recent study has revealed the wintering grounds of flammulated owls in Central America (Linkhart 2016). Like many neotropical migrants, we predict that flammulated owls rely on specific stopover locations to make long-distance migration successful. However, nothing is known about the precise locations of these stopover sites.

Stopover sites are crucial for neotropical migrants to survive fall and spring migration (Buler and Moore 2011). Yet, because nothing is known about flammulated owl stopover locations, we are unable to direct any conservation efforts toward preserving these landscapes.

This study uses GPS PinPoint devices attached to individual flammulated owls in their breeding grounds immediately before they depart for fall migration. The devices will collect data points each day of migration and place the birds at exact locations along their migration routes. With this data, conservationists can finally begin assessing habitat quality of stopover locations, which are not only necessary for the success of flammulated owls, but of hundreds of neotropical migratory birds species.

Through this project, we hope to identify several important stopover locations used by owls during migration. Researchers will attach GPS devices in September and October. During this time, male owls defend their territories in hopes of reoccupying them during the next breeding season. These are the individuals we will target, as they are the most likely to return to the study site during the next breeding season.

Meanwhile, individual owls of all ages and sexes will be captured and measured. Data on mass, feather length, molt patterns, and behavior shed important insight on the population-level and individual-level dynamics of migration preparation.

Upon recapturing GPS birds next summer, researchers will finally have evidence of stopover habitat and timing for flammulated owls.

The bulk of the fundraising has already been completed--over the past year, we have acquired funds to purchase 8 GPS PinPoint devices to attach to individual owls. Now, all that's left is the low cost of sending researchers out into the field to affix the devices.

Capturing flammulated owls--especially individuals that have a high likelihood of returning to our study site after migration--is no easy task. On average, we are able to attach one GPS every week, and this is after spending five nights in a row attempting to capture from dusk until the wee hours of the morning. The good news is, this time isn't wasted.

When we're not directly attaching GPS devices, we're observing birds from all across the study site as they prepare for migration. Throughout September and October, we learn about how flammulated owls stock up on food before their long journey while also preparing for the next breeding season. This data is used to better understand their migration ecology. 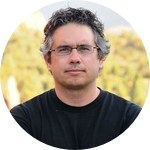 At the beginning of September, researchers will start capturing owls to attach GPS devices and take measurements. This process will continue until all individuals have left the breeding grounds for migration at the end of October.

In May of 2019, we will return to the study site to begin our re-capture efforts. Upon recapturing GPS birds, we will upload and examine the data. Later efforts will involve extensive data analysis with the goal of submitting the study for publication.

Deploy our first GPS and collect measurements on 10 individuals

Deploy all 8 GPS devices and collect measurements on 60 individuals 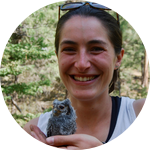 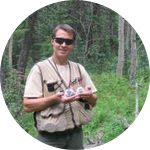 Eliza has been working with Colorado College Professor Brian Linkhart on his flammulated owl study for two years. Upon receiving a BA in Organismal Biology and Ecology from Colorado College in May 2018, Eliza has searched for ways to contribute to the expansion of the project and its long-term impact. In her free time, Eliza enjoys hiking through the forest in search of owls, writing about owls, and thinking about owls.

Dr. Brian Linkhart is a professor of Organismal Biology and Ecology at Colorado College. Brian has been researching flammulated owls in Colorado since 1981, and his research has led to the implementation of important conservation and management techniques by the forest service. Publications include:

Yanco, S. W., and B. D. Linkhart. Habitat selection by Flammulated Owls in a post-fire landscape. Studies of Western Birds.