Wooden carcasses, former trees and ships, bring a rare commodity to the deep sea devoid of light and plants—food. Little is known about these ephemeral wood falls, the unique faunas on them, or the basics of their food web. By examining chemical fingerprints we can determine what each animal eats and whether it is predator or prey. This will yield a richer understanding of how land and oceans are linked in the global carbon cycle.

The Secret Oceanic Life of a Tree
Each day a tree dies. Its carcass may lay there on the forest floor, ravaged by fungus, insects, and plants as they grow from its remains. But, perhaps the tree meets a watery grave–gently floating down river ultimately finding itself bobbing in the ebb and flow of the tides. Eventually this tree becomes waterlogged and begins sinking.

At a critical depth and pressure the ocean squeezes the last bit of terrestrial air out of the wood replacing it with brine. So begins the story with a tree sinking into the deep. Wood falls range from small fragments to 2000+ pound behemoths. In the deep, devoid of light and plants, a wood carcass brings a rare commodity—food. The amount of carbon a tree or piece of wood brings to the seafloor can be anywhere from ten to a thousand times that regularly encountered on the seafloor. From the carcass comes nourishment to sustain deep-sea life.

Ocean Creatures Eat Snacks From Land
What’s surprising given the rarity and uncertainty of that wooden treat along the deep-sea floor, is that wood falls possess a fauna wholly specialized for living and consuming them. The digestion of a fibrous and solid food source requires talent, a hearty gut, and some bacterial help–traits not many species possess. These organisms finish the tree off, tearing it apart from inside and out. Bivalves of the genus Xylophaga (measuring less than an inch) use a ridged shell to bore into the wood, ingesting the wood fragments. On their gills they host an endosymbiotic bacteria that can digest their woody snack. But, something extraordinary also happens on wood falls, special bacteria anaerobically breakdown the wood. One of the by-products of this, sulfide, can be used by chemosynthetic bacteria, similar those at hydrothermal vents. These bacteria provide a tasty snack for animals at wood fall. Scientists know little of which species gain nutrition through a pure wood versus the sulfur route. Nor do we know which species are preying upon others. Using the chemistry of the animals, by looking at stable isotopes of carbon, nitrogen, and sulfur, we can begin to reveal this.

Understanding Food Webs with Stable Isotopes
Carbon, nitrogen and sulfur are all important elements obtained from eating other stuff. The old adage “you are what you eat” is actually true to some extent. Each animal has a slightly different signature of stable isotope ratios that reflect the signature of preferred food items. In nature, 1.1% of all carbon isotopes are the stable Carbon-13. However, plants and phytoplankton take up Carbon-13 differentially; Carbon-13 serves as sort of a chemical thumbprint of the food source. Terrestrial plants possess higher values than phytoplankton which in turn are higher than seagrass. The nitrogen isotopes, specifically Nitrogen-15, how high up the food chain an animal is. As organism eat each other, Nitrogen-15 is transferred to the predator. Thus, top predators have the highest Nitrogen-15 values. Looking at the Sulfur-34 concentrations can tell us whether an animal is munching on the sulfidic bacteria or predator of something that does.

Chunking Wood Into the Ocean: The Experiment!
In 2006, Jim Barry (Monterey Bay Aquarium Research, MBARI) and I (with the generous support of MBARI) chunked 36 logs overboard to begin to examine wood fall communities. Chunked may be a strong verb for sending them down on a benthic elevator. Once on the bottom, a remotely operated vehicle dispersed them over a 1600 square foot area now affectionately referred to as Deadwood. In 2011 and 2013, we retrieved these wood falls. On the surface, I and others picked through the once solid but now bore-riddled and crumbling logs for Xylophaga, limpets, worms, snails, and other wee beasties. As we picked through the rotting wood carcasses, my level of excitement was only matched by the sulfidic, rotten egg, stench of decomposition.

Wood represents a significant source of carbon input into the deep oceans and ties oceans and land together in the carbon cycle. Wood has been found frequently on the deep-sea floor several miles deep and several miles from land. During major storms that drive erosion and move debris down river, the movement of wood into the oceans can be sizable. During the Typhoon Morakot in 2009, the total amount wood weight carried to the oceans was estimated to be the equivalent weight of ~850,000 school buses. On the deep-sea floor, a single wood fall can enrich the carbon of the sediment by >25% even after several years. This represents a major pathway of natural carbon sequestration that has received little attention. We know very little of the fate of this wood based carbon after it arrives to the seafloor.

But this forest to deep ocean carbon pathway may be changing owing due to deforestation and increasing river discharge. From 2000 to 2005, 7.3 million hectares of forest per year were lost. In most of insular Southeast Asia, the forest cover decrease exceeds 50% and is well over 80% in New Guinea. Across Mexico, only 27% of the original forest cover remained intact by 1990. In addition, global warming is driving greater transport of atmospheric moisture in certain areas leading to increasing river flows. From 1936-1999 annual discharge of water in the largest Eurasian rivers into the Arctic Ocean increased by 7%.

We plan to send samples to the Washington State Stable Isotope Core Facility for analysis of the stable isotopes. Each isotopic analyses for carbon:nitrogen costs $8.20 and for sulfur $16 per sample. At 5 samples for each of the 30 species equals $3, 630. An additional $370 is required for the shipping of the samples to Washington state. Funds beyond the $4,000 will allows us to deploy more wood falls!

"Woodfalls" are a previously unappreciated yet globally significant link between the ecology of the land and that of the deep ocean. This project will boost our understanding of some fundamental marine biology, and how changes in our use of land can have far-reaching and hidden consequences. This research team has the ideal background and track record to undertake this work, and I look forward to exciting results from the project, from the deep-sea creatures that feast on wood to what it means for the ecology of our world. 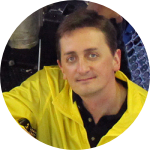 Dr Jon Copley
Senior Lecturer in Marine Ecology, University of Southampton, UK
Craig's studies of the wood falls as oases of food in deep-sea ecosystems is both very interesting and important. Nearly all life in the deep-sea depends upon sinking organic debris from the surface (plankton, waste products, etc.) - wood can be an important food source, so long as you can digest it or cooperate or consume critters that can. Craig's work will help understand how and who consumes wood falls, and how these organisms may have evolved. Cool stuff! Craig is brilliant and works very hard. I have no doubt he'll be successful

Jim Barry
Senior Scientist
This project is really interesting. We suspect that wood falls are an important source of nutrition to the deep sea, but we don’t really understand which animals make first use of it, and how the energy they gain is transferred to other deep-sea animals via the food web. Understanding food webs is fundamental to understanding an ecosystem, and therefore to managing it effectively in the face of a changing climate. The research team have the expertise to succeed with this project, and will advance our knowledge of this last great wilderness. 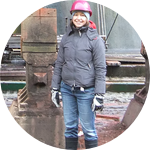 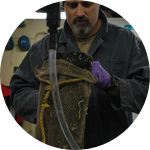 The work is in collaboration with Jim Barry (MBARI) and David Honig (Duke University).
Craig McClain is the Assistant Director of Science for the National Evolutionary Synthesis Center at Duke University. He has conducted oceanographic research for 15 years and published over 40 papers in the area. He has participated in dozens of expeditions taking him to the Antarctic and the most remote regions of the Pacific and Atlantic. Craig’s research focuses mainly on marine systems and particularly the biology of body size, biodiversity, and energy flow in deep sea life. He founder and chief editor of Deep-Sea News, a popular ocean themed blog, rated the number one ocean blog on the web and winner of numerous awards. Craig’s popular writing has been featured in Science Illustrated, American Scientist, Wired, Mental Floss, and the Open Lab: The Best Science Writing on the Web. Read more a craigmcclain.com

The Second World That Forms On Sunken Trees by Ed Yong at National Geographic
Why Is This Marine Biologist Throwing Logs Into The Ocean? by Roxanne Palmer at International Business Times

Update: All donators will be registered in a drawing to win a Giant Plus Giant Isopod

Fund $10 and more
Personalized e-mail thank-you. Quarterly updates with photographs on how the project is proceeding and what exactly your contributions are going towards. These updates will be received at every contribution level.
Fund $25 and more
A custom designed Wood Fall sticker
Fund $50 and more
A Deep-Sea News Pirate Giant Squid Sticker (http://deepseanews.com/wp-content/uploads/2013/12/dsnbanner.jpg) to go with the Wood Fall Sticker
Fund $100 and more
An 8.5x11 print of wood fall creatures!
Fund $250 and more
A small chunk of the bored wood from 3.5 kilometers deep!
Fund $500 and more
You will be acknowledged as a contributor in my manuscript/publication and will receive a signed copy.
Fund $1,000 and more
I will join you and friends (or a classroom of your choice) for Google+ hangout where you can ask me all about wood falls, oceans, and the life of a scientist. If my travel schedule brings me near your location, we can even do it in person! Stickers for everyone!

As soon as you make a pledge, we'll contact you about receiving your reward.