Is the fossil Allodesmus a seal or sea lion? Allodesmus lived in the Miocene period, about 10 million years ago. They were early pinnipeds (seals, sea lions and walruses) that shared the ocean with ancient whales and giant sharks. Since no one knows whether Allodesmus was a seal or sea lion, I will be comparing the fossilized skull and skeleton to those of modern day seals and sea lions to determine which it was.

This fossil, named Allodesmus, was discovered in an ancient sea bed in California. It is clearly a pinniped (seals, sea lions and walruses), but no one is sure which one! From examining the fossils, it looks like the general shape and structure of the skeleton resembles modern sea lions, but a closer look reveals that the skull looks more like that of a seal. I will find out which by examining modern seal and sea lion skulls and skeletons, noting distinct differences, and running those through a computer program. The program will give me a family tree showing how the different species I'm comparing are related. For accuracy, I will be including DNA for all modern species.

Understanding how the species today came to be, is critical to understanding the world around us. Knowing whether Allodesmus was a seal or sea lion will provide the framework for understanding how swimming evolved in both seals and sea lions. Early in their evolution, pinnipeds were land mammals, which over time adapted to a life in the sea. But they each did it differently. Seals swim by moving their hind limbs side to side, kind of like a shark, while sea lions use their forelimbs in a motion that has often been described as "flying". Knowing how Allodesmus swam, and which it's more closely related to, will help us understand the transition from a land mammal to a marine mammal.

1. Collect data on distinct differences (characters) between the bones of seals and sea lions.

2. Examine the Allodesmus fossil to see which landmarks it has in common with each (coding the characters).

3. Enter the coded landmarks for each species into a program that will help me build their phylogenetic (family) tree.

4. Run the program (including DNA information) and see how each species is related to each other. This will tell me whether Allodesmus was a seal or sea lion!

Hi! I'm an east coast girl who moved to San Diego to pursue my Master's degree in evolutionary biology. I've always loved animals, and studying evolution is my way of making the world make sense. I want to know where species came from and how they got to be what they are. And of course, I love working with seals and sea lions!

When I'm not in the lab I'm either outside or playing board games with my friends. I like to hike and snorkel, see the wildlife up close and personal. As for board games, I love to play anything that involves strategy, and out-thinking my opponents!

Here are some pictures of me at work. You can get a sense of how long I've been working on my project by watching my hair get longer throughout the pictures! 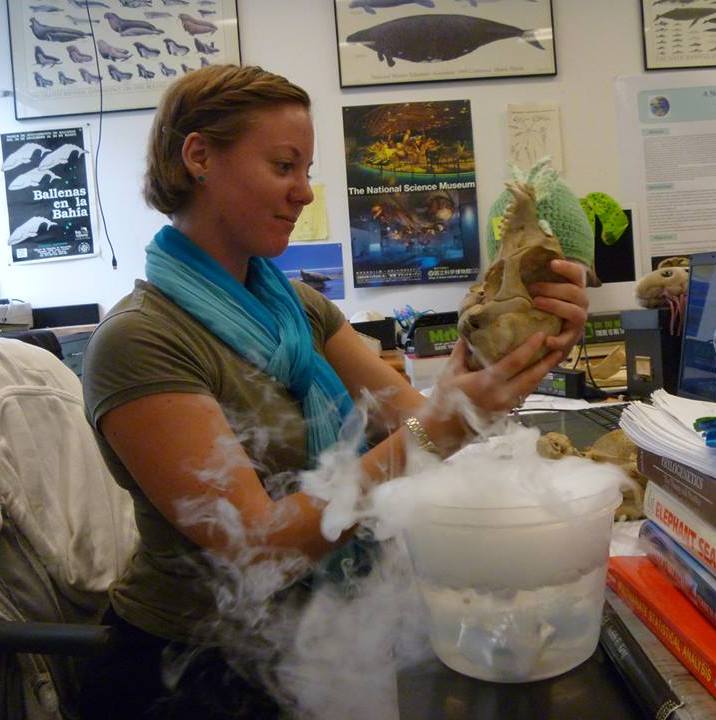 You can see that my labmate and I are having fun with some dry ice! That day she got a frozen seal head shipped to her so she could dissect and examine it's facial muscles. 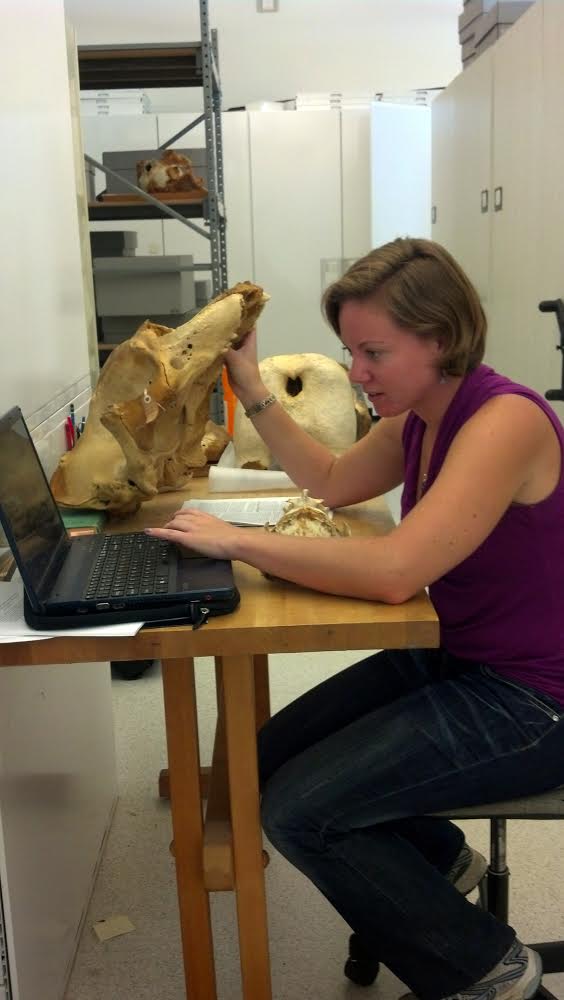 I am coding characters (distinctive shape) on an adult male elephant seal skull at the San Diego Natural History Museum.

Below are some pictures from my first visit to L.A. 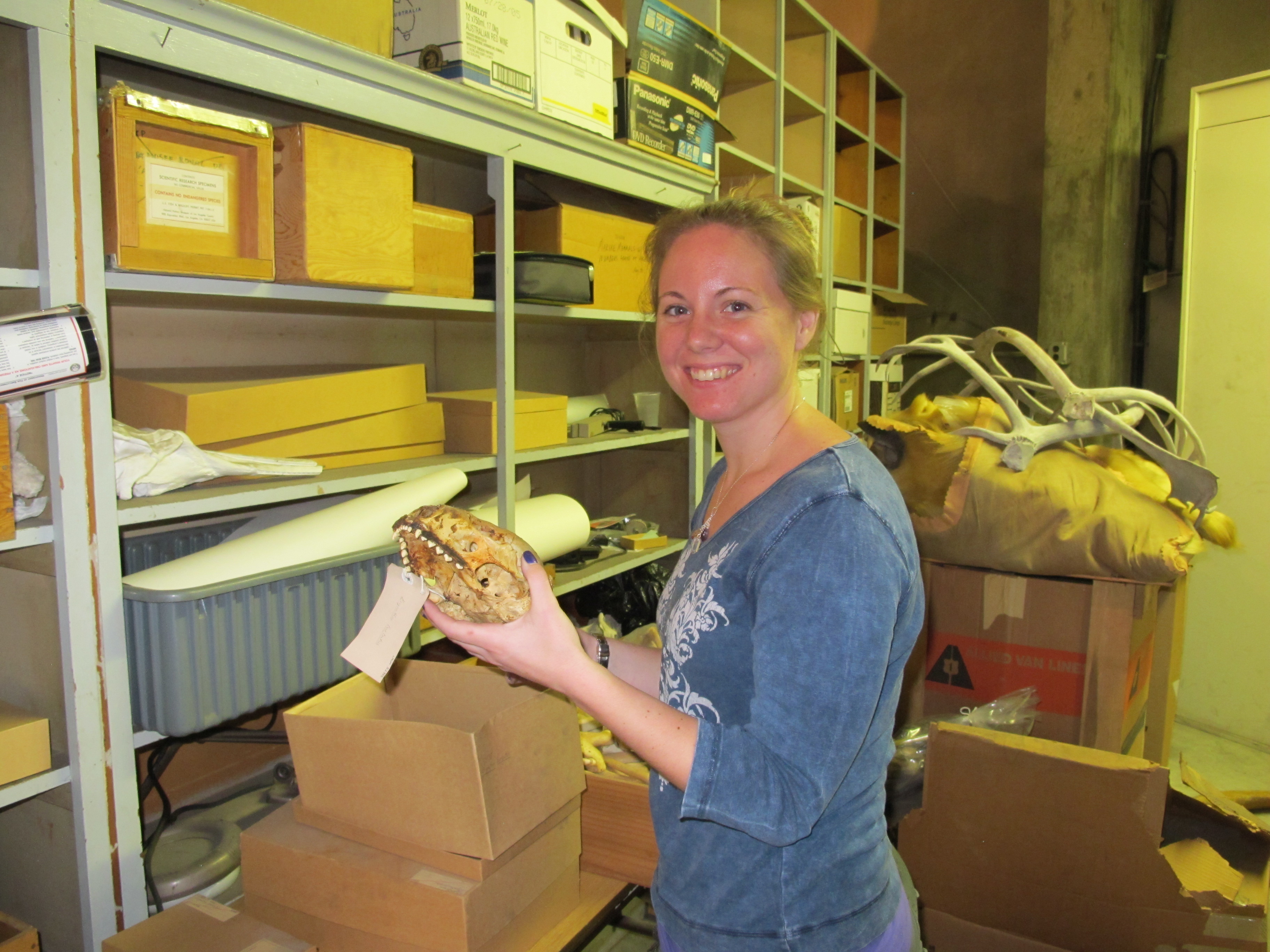 Getting out materials (bones) to work with. 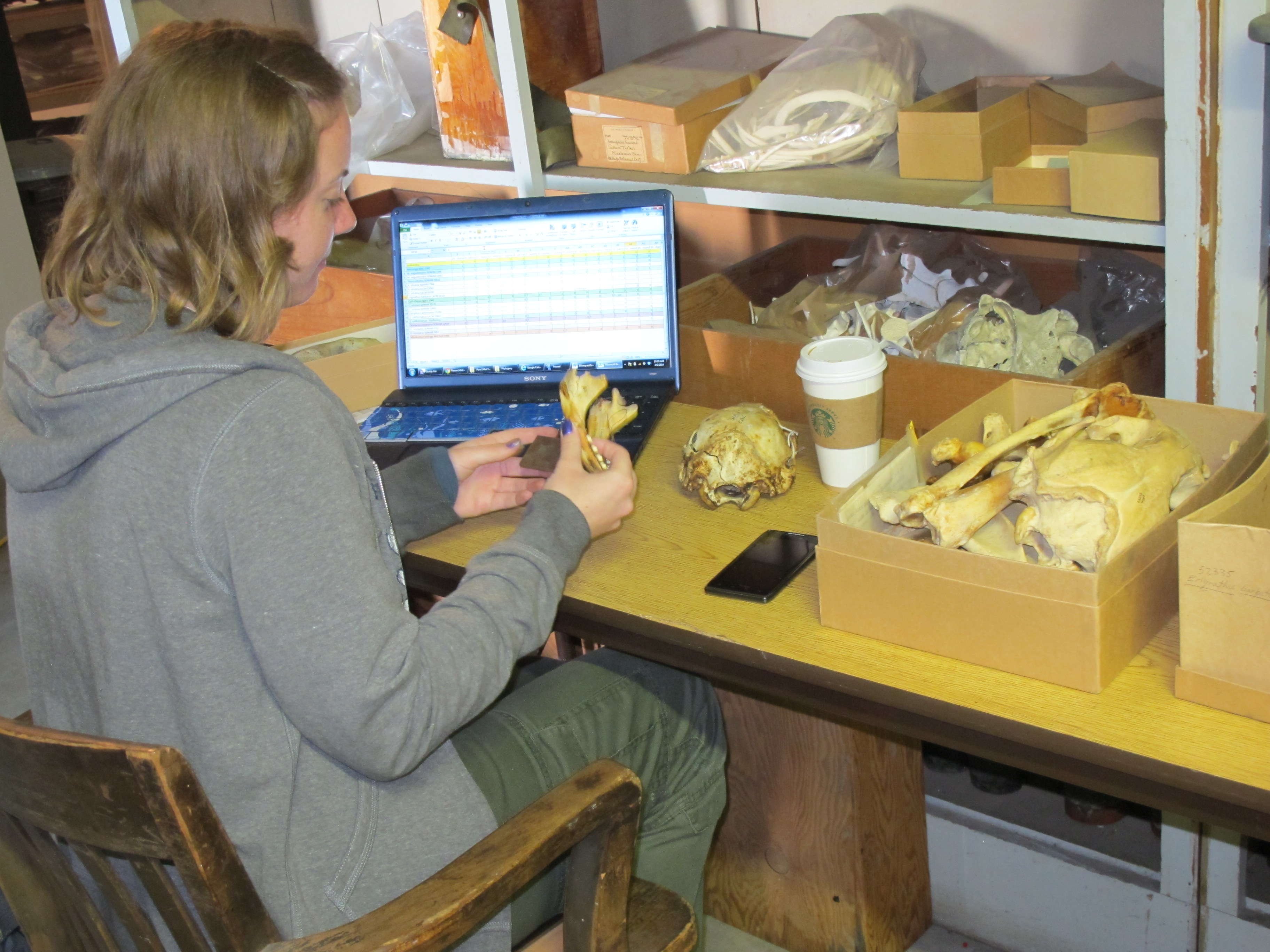 Coding characters on the mandible (jaw) of a bearded seal. 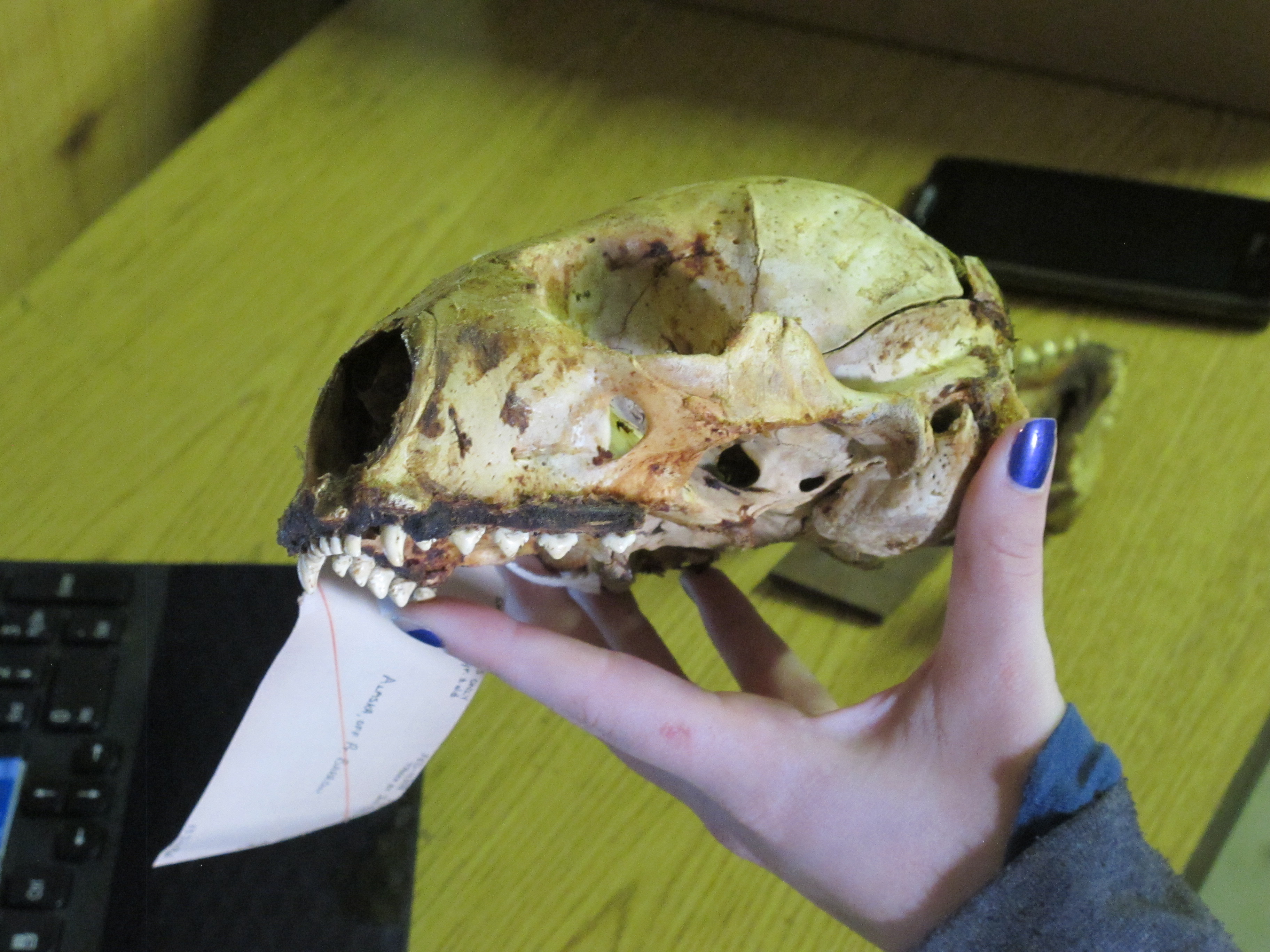 Up close of the bearded seal skull. Not quite as clean as I would have liked... xP 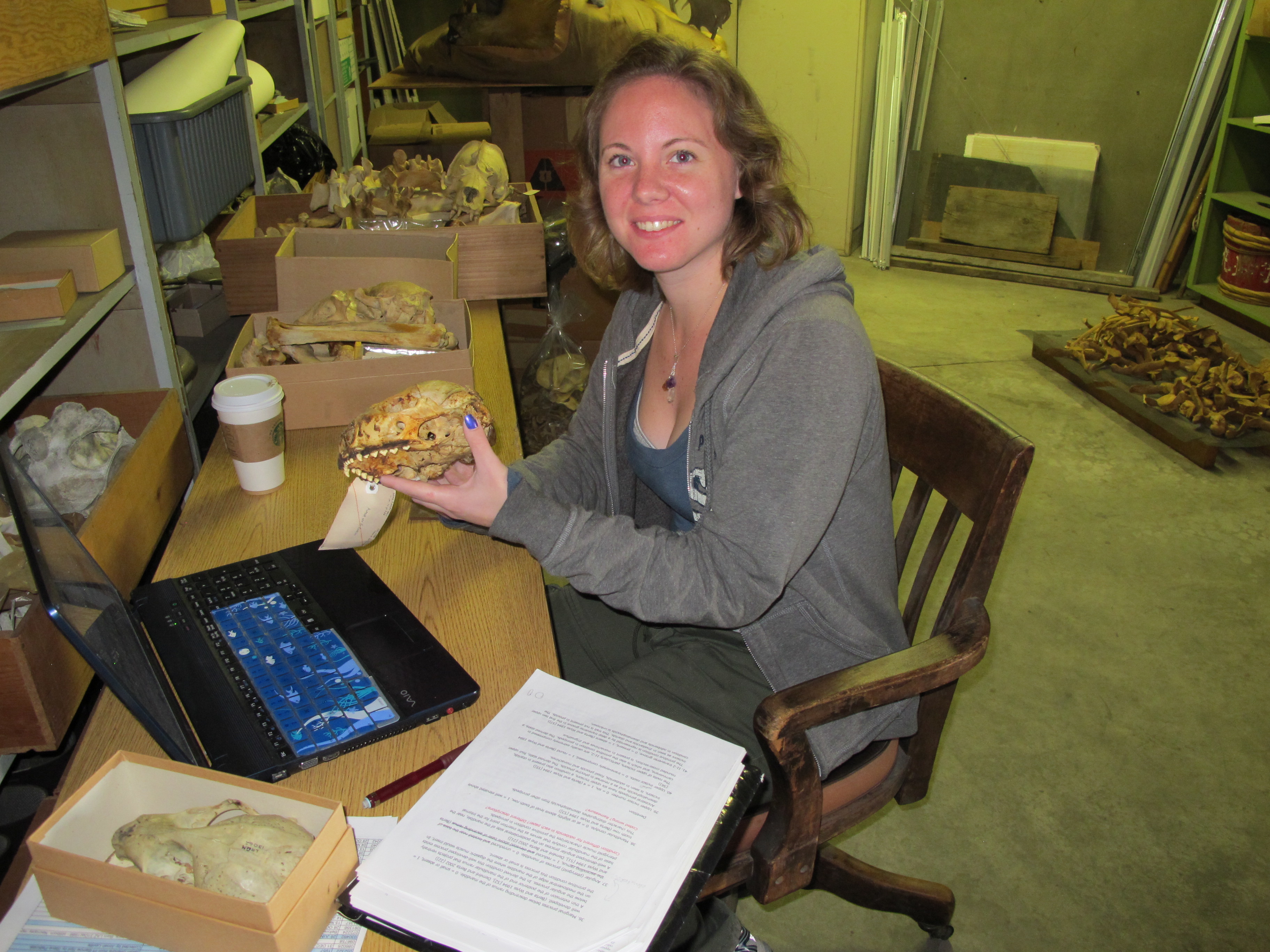