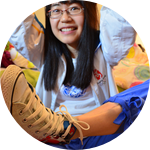 Department of Geography at University of Georgia

Hello, everyone, I am a Ph.D student at geography department in University of Georgia (Athens, Georgia). Born in a family with parents studying climate and botany, I have been always fascinated with the interactions between these two categories. Tropical climate was thought to be stable, and tropical vegetation was also considered to be little changed during the last 10,000 years. However, in recent decades, numerous proxy-based paleo-environmental reconstructions, developed for central to southern Costa Rica, have led to the rejection of the assumption of tropical climate and vegetation stability, and also led to the discussion of the influence of anthropogenic impacts on the landscape during prehistoric times. As a paleoclimatologist, understanding how long-term climate varies and disentangling how climate influences landscape change in the geologic past are my top research interests. If we can better characterize how has hydroclimate fluctuated during the Holocene, and how climate change influenced vegetation and landscape change we will be better positioned to predict how projected climate change will influence the Páramo. I am very excited about the potential of my project and I am looking forward to combining my paleohydroclimate reconstructions with what is known of past fire history to interpret landscape change in Costa Rica during the Holocene. ResearchGate link

Do microplastics on our ocean's surface have an effect on climate change?

Sequencing the genomes of all known kākāpō

Today, we will core our last lake, Lago Chirripo. Another short sediment core will be extracted from this lake.今天，我们将完成最后一个湖（Chirripo湖)的采样工作。采一根短芯。 If we finish early, we will have a chance to visi...

The major mission to collect long sediment core from Ditkebi was done yesterday! Today we are heading to the second lake in the North for extracting a short core for later comparison work.从Ditkebi湖...

It's never too late to have your lovely gifts!! 不要错过您喜欢的小礼物哦！！！

Appreciation Gifts！！！ My dear BackersIf you like these gifts, it is never too late to increase your pledge to reach the $25/$50/$100 line to get them!...

Appreciation Gifts for My Dear Backers！！！来来来！礼物来了，为了回馈我亲爱的Backer们！！！

Hi! My dear BackersIn order to thank you for your support, I have prepared some gifts for you.亲爱的backer们，为了谢谢你们对我们项目的支持，我已经为大家准备好了感谢礼物。Backers who donate:$25 or up will be given a CERTIFICATION OF ...

This is our last day at Lago Ditkebi, our last chance...WE MUST SUCCESS!!!! PLEASE! BEST LUCK TO US!!!这是我们最后一天在Ditkebi湖，我们最后的机会，我们必须成功！！！！拜托了！一定要祝我们好运啊！！！ We have to race with time t...

Set off again. 5:37 AM in the morning.早上5:37又出发了。 Along the trail, dawn in Paramo. 登山中所见美丽的黎明之景。 Lago Ditkebi, we are back! Ditkebi湖，我们...

Dave is hammering a steel rod into the ground at west shore. Steel rods need to be set up at the lake shores (at least from three directions) to serve as "boat anchors on land", in ...

Get a close look of Lago Ditkebi. 走进一点看看我们研究的冰川湖 Actually, it is nicer than I thought. 其实景色还不错哦，比我想象的好多啦 First of the first, we need to reassemble the coring platform ...