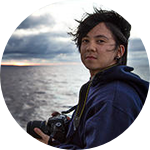 About
Paul J. Clerkin is a graduate researcher at the Pacific Shark Research Center of Moss Landing Marine Laboratories in Moss Landing, California. Clerkin specializes in rare and deep-sea chondrichthyans and is focusing on new species descriptions and life histories of poorly understood sharks species. His thesis work is with David A. Ebert studying sharks encountered during two surveys in the Southern Indian Ocean in 2012 and 2014, a total of 126 days at sea. He has also conducted research for other projects aboard ships in the Bering Sea, South East Atlantic, Philippines Sea, and across the Pacific. He is currently describing some of the 15 new species he discovered in the Indian Ocean and planning his next expedition.
Joined

The Chondrichthyan Tree of Life Project: Taking Stock of the World's Sharks and Rays

Our friends at Desert Star Systems have made a huge contribution toward the purchase of one of their high-quality tags for this project, greatly reducing the amount that we need to raise to save Me...

Hi Backers! We have an updated video to brief you on the project. Take a look, tell us what you think! And again, thank you for backing the Adopt a Megamouth campaign!

Who doesn't love gifts for supporting shark research? Since some backers have donated $50 or more to help adopt Megamouth sharks, we made some 3Doodler Megamouth sharks to say thank you. The first ...

Happy to announce some gifts! The first 200 backers ($25 and up) each will receive an original print from previous expeditions on the high seas. Thirteen backers have already donated $25+, so we ha...

Look what we found leafing through old editions of National Geographic Magazine. This story from 1992 seems modern: "Do Sharks Deserve Their Bad Reputation?" Later in the story the writer talks abo...

Finding and tagging a Megamouth shark on Alien Sharks: Close Encounters was an amazing experience for me, and I'm so happy to have had the opportunity to share the mysteries of Mega...

Preparing for the High Seas, a throwback!

Hi Everyone!I can toss a throwback Thursday on a lab update right? Why not! Today I bring you a flashback to preparing for my most recent trip to the Southern Indian Ocean.  About tw...

First Lab of the Semester

Hi everyone, We dove right into the tedious side of science this week, sorting hundreds of vials of tissue samples and photo-documenting an egg case from a new species of deep-sea catshark. UROC in...