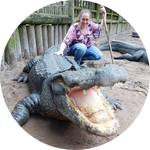 The University of Tennessee

About
I grew up in east Tennessee, and received my BS from the University of Tennessee, majoring in geology and minoring in biology. While attending UT, I found my future path in an unexpected place, a forensic anthropology class taken on a lark my last year of undergrad. I went on to receive a PhD in Geoscience from the University of Iowa in 2012, taking similar principles to those used in forensics and applying them to fossils that are millions of years old. My research interests fall into two broad categories, taphonomy (the study of the processes that act on remains after death) and crocodylian evolution and behavior. I am happiest when combining the two, such as when I joined Chris Noto and Derek Main in describing patterns of bite marks left by a new species of crocodyliform found at the Arlington Archosaur Site (AAS) in 2012. There is so much work left to do with the AAS crocs, and the site's unique age, location, and level of public participation make it an amazing resource.
Joined

To Selfie or Not to Selfie - How Can Scientists Foster Public Trust on Instagram?

The diversity of North Dakota’s mysterious monsters of the deep

By Clint A. Boyd

With the field season wrapping up, we wanted to touch base with all of you to let you know what we’ve been up to on our Experiment.com project this summer. In July, I was able to join Chris Noto, w...

Stretch Goal Methods: CT Scanning &amp; PalynologyCT Scanning Sometimes, taking a look inside of a fossil can help answer all sorts of paleontological questions that the surface alone cannot. Howev...

Thank you to everyone who participated in the Arlington Archosaur Site Ask Me Anything event on Reddit yesterday! We had a lot of fun answering questions about paleontology and the ...

Have any questions about paleontology in general or the Arlington Archosaur Site specifically? Want more details about the finds we’ve already made at the AAS and what we hope to ac...

If you haven’t read Chris Noto’s previous lab note, it has a great rundown of all of the fossil groups that have been identified at the AAS so far. That post is only for supporters,...

One week in, and we’re already past 40% of our goal! We wanted to share some of our previous research involving the AAS, which we hope to build upon with your generous donations thi...