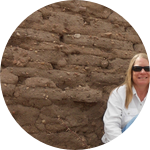 About
Dr. Deni Seymour is a leading regional authority on protohistoric and historic Native American and Spanish colonial archaeology and ethnohistory. For nearly 30 years she has studied the ancestral Apache, Sobaipuri-O’odham, and lesser-known mobile groups (Jano, Jocome, Manso, Suma, and Jumano). She has excavated two Spanish-period presidios (Santa Cruz de Terrenate and Tubac) and several indigenous sites of the period, works with indigenous groups in reconnecting with their heritage, tackles Coronado and Niza expedition archaeology, and is rewriting the history of the pre-Spanish and colonial period southern Southwest. She has published extensively on these groups and this period, with more than 75 publications in referred journals, edited volumes, and popular venues, and has served as guest editor for journals. She has also authored three books with a fourth under review: (1) Where the Earth and Sky are Sewn Together: Sobaípuri-O’odham Contexts of Contact and Colonialism. (2) From the Land of Ever Winter to the American Southwest: Athapaskan Migrations, Mobility, and Ethnogenesis; (3) A Fateful Day in 1698: Archaeological Insights into the Remarkable Sobaipuri-O'odham Victory over the Apache and their Allies. These and many of her other publications are visible on https://independent.academia.edu/DeniSeymour She received her doctorate and master’s degrees in Anthropology from the University of Arizona in 1990 and her Bachelor's degrees with honors in both Anthropology and Environmental Studies from the University of California, Santa Cruz in 1980. She has taught, was employed by a number of state and federal agencies, and has worked for a number of cultural resource management firms, including one she founded and directed. Now she is a full-time research archaeologist affiliated with two academic institutions and the nonprofit research group Jornada Research Institute and she serves on the boards of two non-profit organizations.
Joined

Where are the Spanish Colonial Jesuit Missions at Guevavi?

An evaluation of innovative compounds for early Alzheimer's detection

Another Chronometric Date Back

I just wanted to let you, the backers, know that I paid for another date from Guevavi Mission, and the result has just come back. This means that I now have dates for every adobe structure that cou...

The lab finally sent me the FINAL RESULTS after running some additional information on the associated soil samples. They just sent me the report and here are the final dates, even better and more p...

It's been a long wait but the results are finally in for three dates related to the adobe-walled structures around Guevavi! These were chronometric dates you helped pay for! As you will recall, we ...

Thank you so much for your pledges. We hit our funding target and exceeded it.We can now run two and a half samples ( that is, I will run three)!Thank you to all my backers and to the Experiment fo...

The first dating result is in andsince you contributed to the dating effort you are the first to see it! This is for your eyes only. TheUniversity of Washington lab provided this date:The age of th...

Wow, the First Date is Back!

The first chronometric date is back and it is quite interesting. I have to send him a little bit more information but once I do I will have the final date. I will post this later today or tomorrow....

WE'RE A SUCCESS! THANK YOU!

Our project is a success. We obtained enough pledges to pay for two dates. Its all because of your generous donations. In about a week or so I will post the first results when they come in from the...

My assistant and I will give apersonal tour to the person who pledges $400 or more. This is enough to run asingle sample which means in exchange for making this project happen the donorwill receive...

Guevavi was a Sobaipuri settlement formany centuries where it thrived before European contact.As Guevavi Mission a Jesuit and thenlater Franciscan center it became the most important religious plac...