Although eye patterns and gaze modify human behaviour, anti-predator eyespots do not occur naturally in contemporary mammals. Here we show that eyespots painted on cattle rumps were associated with reduced attacks by ambush carnivores (lions and leopards). Cattle painted with eyespots were significantly more likely to survive than were cross-marked and unmarked cattle, despite all treatment groups being similarly exposed to predation risk. While higher survival of eyespot-painted cattle supports the detection hypothesis, increased survival of cross-marked cattle suggests an effect of novel and conspicuous marks more generally.

A major reason that lions are in decline is that many are killed every day in retaliation for eating livestock. As ambush predators, lions rely on stalking and surprise, so being seen by their prey usually means they abandon their hunt. In rural Botswana I will test whether painting intimidating eye patterns onto cows hides reduces livestock losses. If successful, this inexpensive tool will help to safeguard the lives of lions and the livelihoods of subsistence farmers alike.

Lions are important animals economically and ecologically. They contribute to a lucrative tourism industry, and maintain ecosystem health by regulating prey populations. Unfortunately lions also eat livestock which negatively impacts subsistence farmers living alongside them. Without effective ways to prevent this, many lions are killed in retaliation, and their populations are in decline. While the importance and difficulty of conserving lions is clear, it's less obvious how painting eyes on cows could help, but this innovative idea has a solid basis in animal behavior. Just as eye-patterns on insects deter birds, and wearing a mask on the back of your head can prevent attacks by tigers, perhaps lions can be deterred from attacking livestock by exploiting this psychological phenomenon.

Most human-carnivore conflicts are managed reactively by removing predators using lethal control or translocation. This not only prevents predators fulfilling their role in the ecosystem, but can also lock farmers into a helpless cycle, as the next lion that inevitably moves into the now vacant area must then also be removed. Importantly, reliance on reactive tools can also impose a psychological burden on farmers, as they are left "waiting" for the next attack. In contrast, the "i-cow" solution takes a preventative approach to facilitate coexistence between livestock and lions. Importantly, it is low cost (annually around 1/5 of the cost of losing a single cow) and requires no specialist tools. This is an unusual but desperately needed combination in carnivore-conflict management.

This experiment (June 2016-17) tests whether large eye-patterns painted onto cattle prevents predation by lions. Half of a herd in Botswana (~30 cows) will be painted with an eye-pattern on their rump, while half will not. Survival of painted vs. unpainted cows will be recorded during visits to the kraal (overnight predator-proof enclosure). Cows will also be fitted with GPS-loggers to record fine-scale movement, and equivalent data for a resident lion from the pride in the herd's grazing area will be recorded using a satellite GPS-radiocollar. Results will be shared with farmers and more widely through scientific publication(s) and popular press. The ultimate goal is to provide farmers with a cost-effective tool that reduces their need and desire to kill lions.

The funds requested are essential to complete the proof-of-concept stage of this exciting project. I have previously secured funding for 10 cattle GPS-loggers, a research vehicle and its running costs. These were used over a three-month pilot study last year (2015), yielding extremely exciting results. While 3/39 unpainted cows were killed by lions, none of the 23 painted cows from the same herd were killed.

To definitely test whether painting cows reduces predation risk, I need to complete a further field season. The key focus is to increase knowledge of cattle movements (GPS-loggers), lion movements (GPS-collar) and encounters between them, and to use these data to evaluate predation risk and events in the presence (or absence) of painted eyes. The lion GPS-collar is the most expensive aspect of the work, but at this stage it is also the most critical as it will allow me to determine the actual predation risk that the cows are exposed to through GPS-proximity data.

The human-wildlife conflict that results when lions attack livestock is a major cause of the decline of these charismatic apex predators. Neil Jordan, an outstanding field biologist with over 15 years’ experience of research on African wildlife proposes a deceptively simple but extremely powerful idea: painting eyespots on cows. By harnessing the well-known anti-predator effects of eye-like stimuli in this novel context, Dr Jordan’s work will make a major contribution both to conservation and human livelihoods. 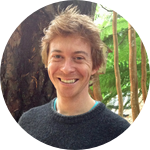 Alex Thornton
Senior Lecturer
University of Exeter
In this world of increasing conflict, we need innovative solutions that help us tread the path of co-existence. Lions play an important role in the ecosystem, and local communities rely on livestock, I have great hope that this is a way to meet everyone's needs. Neil is a fantastic Conservation Biologist, working with a great team in Botswana. I can't wait to see the results and am proud that Taronga staff are developing these solutions. 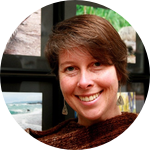 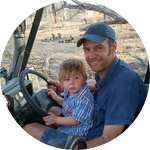 This research is conducted in collaboration with the Botswana Predator Conservation Trust (BPCT), where Neil Jordan has been a Research Associate since 2011. With a local and international team, directed by Dr J Weldon McNutt, BPCT runs a number of long-term research initiatives focused on human-wildlife conflict. It has established a livestock insurance program improving husbandry to reduce losses, and has established links and collaborations with national and local governments and communities.

In the past, I've lived and worked in the Kalahari desert with meerkats (four years), managing Cambridge University's Meerkat Project and completing my MSc through Stellenbosch University. I followed that up with my PhD through Cambridge University, studying scent communication in banded mongooses in Uganda.

I worked for two years for the Vincent Wildlife Trust, writing a pine marten recovery plan which ultimately paved the way for an ongoing reintroduction of the species to parts of the UK.

Missing Africa and its challenges and rewards, I returned to the bush and have spent the past four years under canvas in the Okavango delta working with the Botswana Predator Conservation Trust, where I am a research associate. My previous research there has focused on all aspects of large carnivore conservation (including Land Rover repair), but particularly developing a scent-based management tool for African wild dogs.

I recently joined the University of New South Wales in a joint position between their Centre for Ecosystem Science and Taronga Conservation Society Australia.

My i-cow idea was motivated by the killing of two lionesses in our local village. Villagers felt they were helpless to prevent attacks, and I too was short of solutions and feeling useless. Later, watching a lion abandon a hunt the moment the impala saw it, my "i-cow" idea was 'born'.

To date, I've published approximately 30 scientific articles, mostly on carnivore biology, and aim to have a positive impact in conservation in everything I do. I'm currently focusing my efforts in Australia and Botswana, but I hope for my research to have global reach.

7 Lab Notes Posted
And the winner is...
Update from the i-cow kraal...
i-cows hit the headlines, as I hit the ground in Botswana!