More than 100 years ago, paleontologists discovered the skeletons of ancient ocean-dwelling reptiles in the mountains of northern California. These fossils, including fish-shaped ichthyosaurs and lizard like thalattosaurs, provide a glimpse into the Triassic oceans of some 230 million years ago. This region has not been explored for new fossils in over a century. By relocating important sites and discovering new fossils we hope to shed light on a pivotal period in the history of life on Earth.

Triassic reptile fossils were first discovered in Shasta County, California in the late 1800s. In 1902-03, paleontologists from the University of California collected many important Triassic fossils including the remains of ichthyosaurs, fish-shaped reptiles that swam the oceans at the time of the dinosaurs–and some of the first discovered thalattosaurs–coastal-dwelling lizard-like reptiles that achieved nearly worldwide distribution prior to their extinction near the end of the Triassic. These expeditions were funded by Annie Alexander, a wealthy naturalist and philanthropist who joined the team and discovered many fossils herself. We propose to relocate these long overlooked localities and assess the potential to discover more important fossil material in the region.

The Triassic Period was a critical interval in the history of life on Earth, and was preceded by the largest mass extinction event known, the end-Permian Mass Extinction. During the recovery from this mass extinction reptile groups (including ichthyosaurs and thalattosaurs) adapted to live in the ocean, reversing a trend that had brought their ancestors out of the water and onto land 100 million years earlier. The Shasta fossils record an interval in which ichthyosaurs were growing larger and becoming more highly adapted to marine life. Thalattosaur fossils may be even more abundant, but the group remains poorly understood. By relocating important localities we aim to set the stage for future work that can shed light on the evolution of these groups through the lens of their environment.

Pending approval of permits and arrangements with the public agencies that own and manage the land, we hope to complete this preliminary exploratory trip in fall 2016. We will use records and photographs from the 1902-03 expeditions to attempt to relocate quarries, which should still be visible given the slow rate that the limestone weathers. We will scout for additional fossil remains in and around these localities and carefully record the stratigraphic placement and geographic coordinates of these remains. We will develop a plan for future concerted fossil collecting as well geological investigation of the site.

These items will allow four collaborators to travel from various locations in the country (including Alaska, Tennessee and Nevada) to California. An additional four team members are already based in California. The team will assemble in nearby Redding and divide into two groups. One will access the outcrops by boat from along the Pitt River Arm of Lake Shasta. The other group will drive on Forest Service roads. These groups will work from opposite ends with a goal of meeting in the middle. This two-pronged approach will maximize the area of rock exposure we can search. Furthermore with two modes of access, if either road or lake conditions make access difficult we can adjust our strategy accordingly.

The limestones of Northern California document an important event in marine reptile evolution, when the famous "fish-shaped" ichthyosaurs evolved from more primitive ancestors. However, the nature of this transition is still poorly understood. Neil's project has high potential to provide new fossils that will fill in our gaps in understanding marine reptile evolution. Neil and his team have good experience in studying Late Triassic marine reptiles, so the resulting work will undoubtedly be of the highest academic quality. 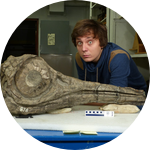 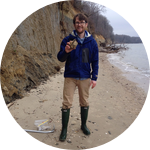 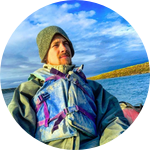 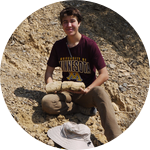 I am a research assistant professor in the Department of Earth and Environmental Sciences at Vanderbilt University. I teach geology, oceanography and paleontology.

I completed my PhD on Triassic marine reptiles in the Motani Lab in the Department of Earth and Planetary Sciences at the University of California, Davis. After that I was a postdoctoral fellow in the Pyenson lab at Smithsonian's National Museum of Natural History.

I am passionate and curious about nearly every aspect of the natural world, but especially the evolution of vertebrates and their role in marine ecosystems since the Triassic.

I am a Master's Student of Vertebrate Paleontology at the University of Alaska Fairbanks studying thalattosaur anatomy and phylogenetics.
I am fascinated with the evolution of marine reptiles in the Triassic, as well as the study of tooth morphology and its evolution.

I am a Palaeontology and Geobiology MScR candidate at the University of Edinburgh. My current research focuses on several recently discovered dinosaur trackways on the Isle of Skye. I graduated from the University of Nevada, Reno with degrees in geology and geological engineering. My undergraduate Honors thesis consisted of creating and assessing a 3-D visualization of the main quarry at Berlin-Ichthyosaur State Park using terrestrial LiDAR scans. As a proto-paleontologist, I'm excited to puzzle out some of life's mysteries and, as a native Nevadan, I have a particular fondness for ichthyosaurs.