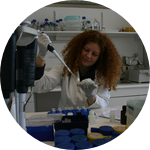 I obtained my doctoral degree in 2006 at the University of Ljubljana, Slovenia, on phylogeographic and taxonomic studies of the European blind cave salamander, or the olm, Proteus anguinus. From 2007 to 2012 I was a postdoctoral researcher in Dr. William Jeffery’s lab at the University of Maryland, investigating eye degeneration of the Mexican blind cavefish Astyanax mexicanus. In 2009 I became interested in regeneration of pigmented organs in the oral siphon of the sea squirt Ciona intestinalis. The studies of molecular mechanisms of siphon regeneration, which I was conducting at the Marine Biological Laboratory in Woods Hole, MA were designed to establish Ciona as a model for studying regeneration in non-vertebrate chordates. In recent years I have been involved in the development of the methodology to search for cave fauna in karst groundwater through detection of their DNA in water samples collected from springs, wells or caves (environmental DNA). At home, I'm raising seven ducks.

Through a glass darkly: assessing population size of an endangered cave salamander from samples of spring and cave water

Identifying the genes necessary to regenerate an injured brain - insights from a basal chordate, Ciona intestinalis

Evolution of Autism-like Behaviors in cavefish: an emerging discovery platform for Autism treatments

What can we do to prevent depression from coming back again?

Can the implementation of In-Situ Filtration (ISF) wells improve water quality in Haiti?

Exploring the temperature tolerance of a cave beetle

Dear backers,There has been a lot of excitement in our team over the past week, and now I would like to invite you to participate. No, this is not about https://garfield.com/comic/2010/12/25. The r...

Dear eProteus backers and followers, This will be my last lab note before official publication of the results of this project. For this occasion I chose to post a piece of extraordinary news, espec...

* R. Goscinny &amp; A. Uderzo (1965): Asterix chez les Bretons, pl. 43Dear Backers,Thanks to your interest and generous donations, it looks like I will be able to complete the first phase of brain ...

At the 23rd International Conference on Subterranean Biology two years ago I presented the results of a survey that introduced the eDNA method in the subterranean environment. Since then it is poss...

I am writing this progress report in humble recognition of the donation by an anonymous backer.Last Tuesday we ablated the neural complex of 72 Ciona adults of various sizes, which have been left t...

The Mystery of the Missing Molecule

Dear eProteus fans,It is with great satisfaction that I announce the outcomes of our little proof-of-concept experiment. Given that over a year has elapsed since I wrote the last note, and that the...

Nail it or fail it

A very long time has passed since any attention was paid to our project and maybe you were beginning to wonder why. The weather has been nice and spring is usually the time many biologists, cave- o...